How are Russia’s missile strikes on civilians in Vinnytsia and Chasiv Yar not terrorism? Russia produces a variation of easily disproven lies about its horrific war crime in Kremenchuk Collaborators with Russian state terrorism should be thrown out of International Federation of Journalists Chief Russian propagandist: “All our hope is pinned on famine” Russian invaders demand Ukrainians have ‘filtration’ stamps and permits to live in their own citiesRussia sends relatives of Ukrainian soldiers and other Mariupol residents to ‘concentration camp’ in occupied DonbasHorrific conditions and torture in Russian filtration camp ‘ghetto’ for Mariupol residents Hospital bombed by the Russians at Azovstal as more mass graves found near Mariupol Mass grave near Mariupol could contain up to nine thousand victims of the Russian invaders Russia plans total ‘filtration’ of Mariupol men and forced ‘mobilization’Russia destroys Mariupol and tries to get illegally deported residents to move to Siberia Russia accused of using mobile crematoria to hide its war crimes in Mariupol At least 50 Ukrainians were burned to death in Russia’s bombing of Mariupol hospitals Russian FSB produce ‘refugee’ propaganda video blaming Ukrainian soldiers for Russia"s war crimes in Mariupol Russia continues bombing Mariupol while producing propaganda videos about its ‘humanitarian aid’Russia responds to International Court order to stop bombing Ukraine by destroying Mariupol Theatre sheltering familiesRussian invaders take Mariupol intensive care hospital and its patients hostage Mass graves of the Ukrainian civilians Russia claims it is not killingTerror and abductions as Russia tries to break Ukrainian resistance in Kherson and other occupied citiesUkrainian journalist Oleh Baturin feared abducted by Russian invaders in Kherson oblast
• Topics / War crimes 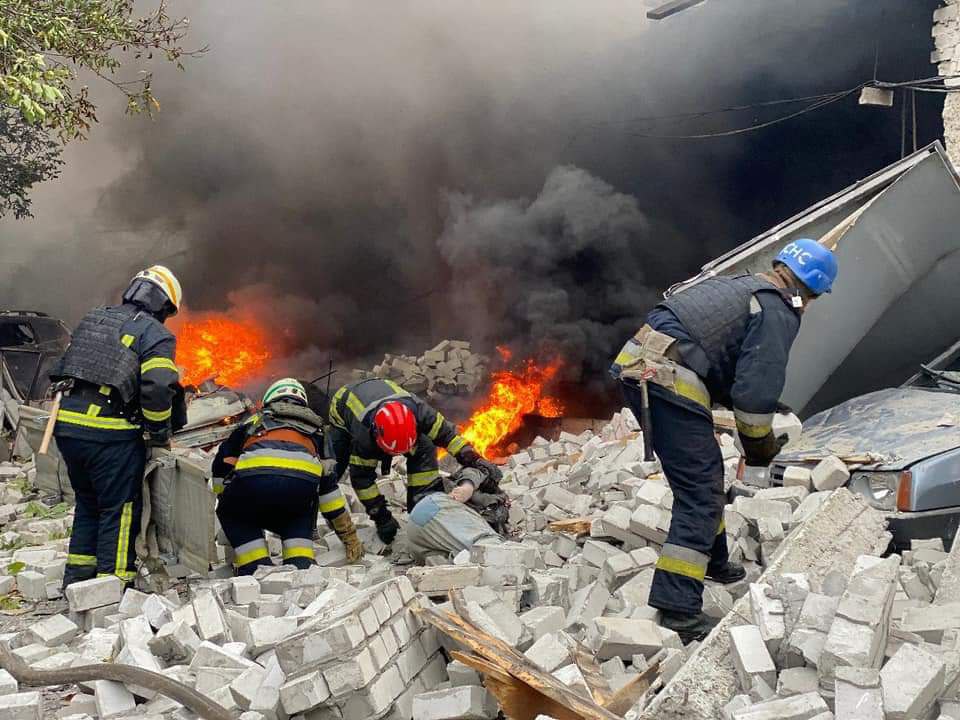 Savage Russian attacks on Ukrainian cities were to be expected after the huge explosion on 8 October that damaged the illegally built bridge between occupied Crimea and Russia.  What was less predictable was the abandonment of any pretence that the attacks were on military targets and were motivated by anything but the wish for revenge.

Russia began bombing Ukrainian schools, hospitals, residential apartments and even playgrounds on 24 February.  The attacks on overtly civilian targets and on critical power infrastructure on 10 and 11 October were not, per se, new, although they were the most intense to date.  Russia even attacked critical infrastructure in the east of Ukraine in early September in fairly transparent retaliation for its humiliating retreat from occupied parts of Kharkiv oblast.  It bombed a humanitarian convoy leaving Zaporizhzhia on 30 September, killing 30 civilians and has been bombing residential blocks almost every night since then.

Up till now, however, the rule of thumb has been that war crimes, like the bombing of a railway station in Kramatorsk; a shopping centre in Kremenchuk; the centre of Vinnytsia, and countless other attacks on civilians are denied, claimed to have been ‘Ukrainian provocation’ or described as ‘high-precision strikes on legitimate military targets.”

In an interview to Current Time, Ruslan Leviev, military expert and founder of Conflict Intelligence Team, was asked for his assessment of Russian motivation for the first day of mass attacks on 10 October.

Leviev pointed out that this was the first time that Russia’s leadership had admitted to targeting critical civilian infrastructure.  The narrative up till now had been that Russia uses only high-precision weapons; that it tries not to hit the civilian population or civilian infrastructure.  In speaking before the Council of the Federation (the upper house of parliament) Russian leader Vladimir Putin had effectively admitted to such attacks and to the lack of any military strategy behind them.

Putin had listed what he claimed to be ‘Ukraine’s acts of terrorism’.  These included the explosion on the Crimea (Kerch) Bridge and alleged attacks on the Kursk Nuclear Power Plant in Russia.  Russia’s claim that the attack on the bridge (which Ukraine has not said it was behind) was a ‘terrorist act’ is impossible to take seriously.  This is an illegal bridge built by an aggressor state which is being used by the latter to deliver weapons, military hardware and men for Russia’s war against Ukraine.  Russia’s claim that there were attacks on the Kursk nuclear plant and that they were committed by Ukraine have received no independent verification.  Even more scepticism seems warranted with respect to his claim that Russia had thwarted a ‘terrorist attack’ on the TurkStream gas pipe.   Russia has been making such assertions since 2014.  In virtually every case where a Ukrainian has been shown on video ‘confessing’ to such acts, there has been conclusive or, at least, compelling evidence to suggest that they were tortured into making such statements.

Putin then said that Russia’s mass attacks on Ukrainian energy infrastructure, military infrastructure and communications were “in response” to what he alone claimed to be Ukraine’s acts of terrorism.  He did not, of course, mention that Russia had also killed at least 19 civilians on 10 October alone, through attacks on a playground, the Shevchenko University in Kyiv; residential blocks and other clearly civilian targets.

As of late on 11 October, Ukraine has reported that on 10 and 11 October Russian missiles had hit around 30% of its energy infrastructure.  Many of the attacks were on 11 October after Leviev’s interview, and his response now might possibly be different.  After the first day, he said that yes, Russia probably is trying to make winter for Ukraine even more difficult but most of all “this is specifically terror, achieving chaos and political pressure.”  He also noted the difference from Russia’s recent humiliation in Kharkiv oblast.  Those military who support Putin were not so upset about the loss of occupied territory in Kharkiv, but did see the Crimea Bridge as something ‘sacrosanct’ which must not be targeted.  Once it had been, there needed to be a savage response, a demonstration of ‘Russian force’.

Leviev did not believe that the attacks spelled the beginning of a new ground offensive, nor did they serve any obvious military goals.  He is not alone in noting that Russia can deprive whole oblasts of power, but this will not make Ukraine’s defenders surrender, nor will it make the country capitulate to a brutal aggressor.