‘There was nothing left of the neighbor, only shoes...’‘Five people were killed there, including a pregnant woman’She was about to turn 53. A citizen of Trostianets speaks about his wife’s detention and murder‘In Sloviansk, we watched out of the window as people held up the train tracks with crowbars so we could pass through’ ‘My brother and weakened mother were left in the middle of the street’ — stories from Izium‘I fell face down into the glass and covered my head with my hands’‘My husband and son were injured during an airstrike’‘I believe the war will end soon, and everything will be fine’She said goodbye to life when the airstrikes made the houses collapse like a house of cardsHis mother was shot, and the place of work was destroyed — Russian occupation harshly affected the life of Trostianets resident Serhii Pentin‘For all the evil they have done, they will be held accountable before God!’
• Voices of war

‘Grandfather was thrown a hundred meters away by the blast wave’ 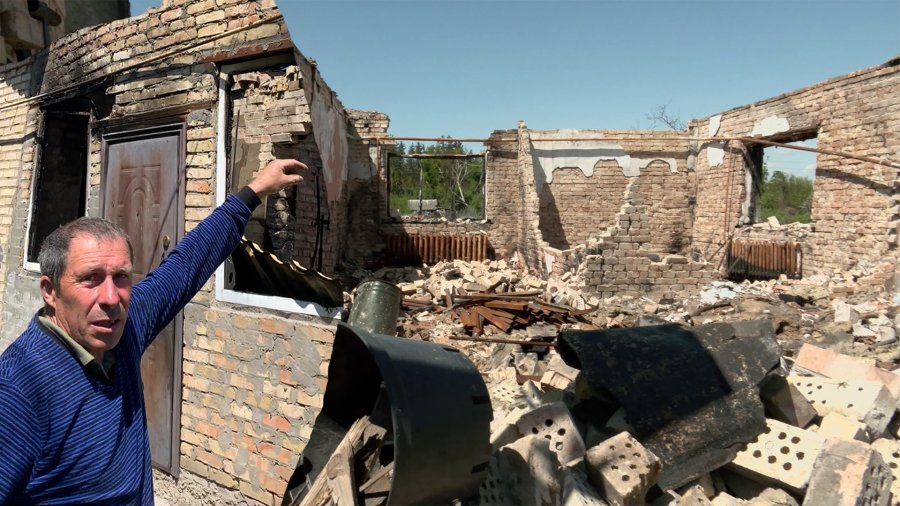 Volodymyr Zaika near his destroyed house in the village of Moshchun, Kyiv region

Volodymyr Zaika is a resident of the village of Moshchun, Kyiv region. He says that only 5% of the houses in Moshchun remained intact.

— My name is Volodya. Before the war, I was engaged in various things. I installed air conditioners, but I am a professional driver. Now I am on a disability pension after a heart attack.

— Did you think that a full-scale Russian invasion would begin?

— No, no one dreamed about it. Even when the explosions began, no one could imagine it would be like it is now, that the houses would be destroyed. Nobody thought they would attack. Earlier, the authority told us to prepare and collect an emergency case and documents so we could leave. However, we hadn't prepared our papers, and later they burned down.

— How was the first day of the war for you?

— It was a typical weekday. First, we woke up, and because it was off-season, there was no work, so we were doing household chores. I raised quails, so I fed them and also dogs and cats - the usual things.

— What happened in the following days of the war?

— In the following days, we sat in the cellar. As soon as the shelling began, we immediately went to the cellar. At first, there were phone connections, but then the light disappeared, and the connections vanished with it. Drones flew over us.

At first, I was in Teroborone [Territorial Defence Forces]. We had one machine gun for three, but we didn’t know whether it was shooting or not ... From 25 February, explosions were heard close, then even closer, and on 6 March, it was deafening. This was when the orcs [Ukrainian name for the Russian army] entered our village. After that, we were heavily bombed with GRADs [The BM-21 "Grad" is a self-propelled 122 mm multiple rocket launcher designed in the Soviet Union]  and mines.

That day, my house burned down, and I left the village because Russian equipment entered it. It was terrible. I saw how helicopters flew to the airfield in Gostomel. Five flew at once, and then I counted another nineteen. We have a village, one might say, in a pit, and they flew very low over the forest, catching the tops of trees. Probably, because we are in the pit, and Gostomel is higher, the air defense did not immediately encounter them. But later, I heard they shot down three helicopters. I even saw how Russian paratroops landed.

— How did you save yourself and your children?

— The day before, I took my wife and son to Pushcha-Voditsa. There was a bomb shelter there. After that, however, I returned and stayed with my neighbor Andrii.

Then, when a shell hit my woodshed, I said to Andrii (he is single): “Take the children to your mother-in-law in Kyiv or take them to your mother. You see what is happening!” Then,  mine exploded in the garden, and shrapnel slightly hit us both: me in the forehead and him in the arm. He took the children out after that, and I stayed alone. When the house was on fire, I put it out so that the woodpile and the cellar would not catch fire because everything was nearby. I carried water from the pump and extinguished it slowly. I decided to leave when the house was already burning, and rapid machine gun fire began nearby in the field. I went to my mother's and met my wife's sister. She said that if we didn't leave now, we wouldn't be able to get out at all later. It was after this that we decided to go.

We could not drive along the paved central street because the orcs were already running and shooting there, so we went through the forest until we picked up the paved road and drove to Horenka. There's a bomb shelter in the hospital. We were the last to leave our village that day.

— Have you seen how the Russian military committed crimes against civilians?

— I heard about it, but I haven’t seen it in person. But I saw how shells and mines exploded. My woodshed was shot at. An armored personnel carrier and an infantry fighting vehicle with their letter V drove into the village two hundred meters from our house. They rushed by, thinking that there was a passage further, but they ended up in a swamp. They were stuck a little but pulled out of there. My daughter-in-law gave birth to a child recently, and the child was not yet a month old, so they were hiding in the cellar. At night they went into the house and warmed themselves. I went for firewood in the evening (I can't hear well when my blood pressure rises), but the drone flew so low that even I heard it. The very next day, it hit the woodshed.

Then, on 5 March, the neighbors' house burned down. It was where the series "Matchmakers" was filmed. There were four houses nearby and all burned down. They aimed from GRADs. An old couple remained in the village and did not want to evacuate. After the shelling, grandmother was found in the cellar, and the blast wave threw grandfather a hundred meters away.

— The GRADs fired, and the house caught fire. I tried to put it out, but when I was bringing a bucket of water, I heard whistles and saw shells flying. I quickly ran to the cellar, but the door was torn out of my hands before I had time to close it. A mine flew into the garage, and now the garage doors look like a sieve; you can use it for draining macaroni.

— What are you planning to do next?

— We will rebuild. The state said it would help, but I don’t know how much ... We must somehow continue to live. But, thank God, people are helping with food, gave me a solar battery, and brought flashlights. They are getting new electrical wires to the village and promised to provide electricity by the end of the month. The problem is I only have a barn left, but we will think of something.

— Has your attitude towards Russia and the Russians changed?

— Of course, it had changed. Only nonhumans kill children and rape women. Initially, people, for sure, were not like that, but they were so zombified. I don’t know what the authorities and the TV planted into their heads! Of course, we didn’t go to them to kill and rape ...

— How can I appeal to them? They are not human. They would not understand. They said they were going to save us! Whom to save and from whom? What can I say to them if they are not people but monsters?

— How did the Russian military behave during the occupation of Moshchun?

— Fifteen Russians came to the neighbor's grandmother. This is the story she told me. She heard someone walking around the house. She has a three-story house and a basement. When the Russians came to her, she picked out of the basement, and they got scared. They asked her to give them food. She replied: “Take raw potatoes and eat!” Then she added: “Guys, give up! You will be safer!” I don't know how she dared to say that. They could have shut her. There have been many such cases. Finally, they left, but she remembered their faces, and they were all shot in the morning.

They caught two Buryats in the field in late April or early May. I don't know whether they surrendered or someone found them. They must have been frightened: they would have been shot, but otherwise, they have survived.

— Will the territory of the village be cleared of mines?

— Yes, almost every day, something is found here. Even my grandmother recently found a shell. They look for mines and clear them.

— What did you feel when you returned to the village after the Armed Forces of Ukraine liberated it?

— Oh, I don’t even know how to convey it. I knew before I got back that my house was wrecked, but my mother remained here in occupation [he is crying — ed.], and we couldn’t contact her for a month. We asked volunteers to help, but she didn’t want to go and stayed here. Thank God everything is fine. When we returned, there were few whole houses in the village, probably 5% percent.

Did you apply for state help to restore the destroyed property?

We called, but they said to wait. When we evacuated to Vinnytsia, I went to the police there. I had photographs of the destroyed house and wrote statements, providing evidence. They registered our request and sent documents to Kyiv. But the review will probably be when the war is over. I also submitted papers in Vyshneve city, which is close to us. I have documentary evidence that the Russian military destroyed my house.