She was about to turn 53. A citizen of Trostianets speaks about his wife’s detention and murder‘Five people were killed there, including a pregnant woman’‘Grandfather was thrown a hundred meters away by the blast wave’‘There was nothing left of the neighbor, only shoes...’‘My brother and weakened mother were left in the middle of the street’ — stories from Izium‘I fell face down into the glass and covered my head with my hands’‘My husband and son were injured during an airstrike’‘I believe the war will end soon, and everything will be fine’She said goodbye to life when the airstrikes made the houses collapse like a house of cardsHis mother was shot, and the place of work was destroyed — Russian occupation harshly affected the life of Trostianets resident Serhii Pentin‘For all the evil they have done, they will be held accountable before God!’
• Voices of war

‘In Sloviansk, we watched out of the window as people held up the train tracks with crowbars so we could pass through’ 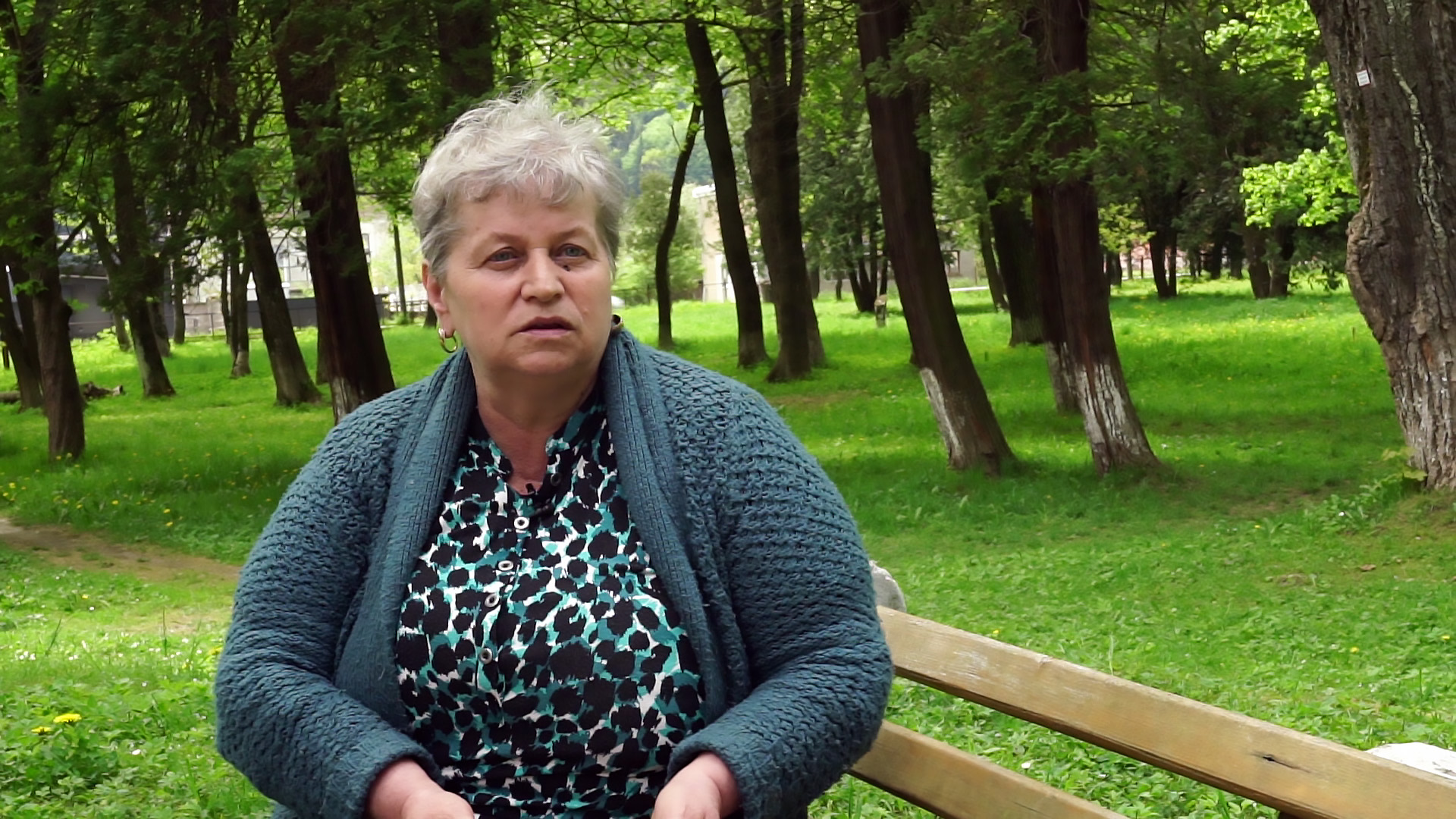 We lived in the village of Serebrianka, in the Bakhmut District of Donetsk Region.

When did the war enter into your lives?

It was on the 24th of February. I got up in the morning, I was going to get my granddaughter ready for school. At 5:30am I went outside and heard a loud thundering noise coming from somewhere near her school. I called the teacher and said “What’s going on? I need to take the kid to school, you see —” and she replied “Don’t. They’re bombing Kramatorsk Airfield. I saw it on the internet.”

Half an hour later, I heard them start bombing from Kramators’k to Sloviansk. Krymina, Rubizhne, Lysychansk, Sievierodonetsk, Popasna. After they started bombing on the 24th they stopped only for 20 minutes. They bombed for 35 days in a row, day and night. When a jet flew towards Popasna, it came so low over the house that my granddaughter went deaf in one ear. Her hearing’s come back now, thank god.

Where were you during those combat operations?

We were in the cellar almost all the time. My son made a stove out of bricks because it was cold. We warmed ourselves in the cellar. Sometimes we slept in there too.

Did you witness the destruction of any civilian buildings/infrastructure?

In Rubizhne I saw the “Zorya” factory burning. I saw the cardboard factory go up in smoke. The flames and smoke were so strong that you could see it from 25km away. Then they burned the oil refinery in Lysychansk, you could also see it from where we were. On the 6th of April Ukrainian soldiers came and started to check people’s documents.

They came into each house and checked documents, made sure there was no one in the cellar who shouldn’t be there. Then I went up to them and asked “What am I supposed to do? What should I do with the child? It’s hard in the cellar with her, I need to make her food, bathe her. She hasn’t had a bath in a month, because I’m afraid that if I start giving her a bath then they’ll bomb us and the roof will fly off”.

In 2014 I saw a shell go off right in front of my eyes. The windows flew out, glass everywhere, half the roof got blown off.

This was in the village of Serebrianka in the Bakhmut Region of Donetsk Oblast. I saw it all and I was afraid that Russia would start bombing us again and I’ve got a child with me. I was really afraid for my granddaughter.

When our lads came they told me “Please understand, you’ve got to leave this place, leave the village, because otherwise it’s going to be very scary for your child”. “I understand,” I said, “but I’m sad to leave my house. I’ve lived here for 50 years”. But in the night, I made a decision that we needed to leave for the sake of my granddaughter.

How did you leave Serebrianka?

It was the 8th of April, the Feast of the Annunciation. We waited for a very long time on our feet at Kramators’k Station: there were more than three thousand people. We were waiting for the train to Lviv. In the evening they told us we could board, so we got on the train.

We were left standing there, but after about 40 minutes the guys came back and said “You can slowly start boarding the train now”. It was tough going because the train was moving so slowly. In Slov’ians'k, we saw out of the window that men were holding up the tracks with crowbars so we could get through. It was very scary but we got there fine in the end, thank god. On the next day two missiles landed where we had been standing. If we’d still been there, then that would have been the end of us. The ones who were there were from Sivers’k, that’s next to our village. They died.

What happened to your village?

We started calling the people who had stayed behind. Our village was burned to the ground. There isn’t a single undamaged house in the whole village. The nursery school where I worked was burned down. On the street one house is destroyed and the others are burned. We don’t have a village anymore.

Is anyone you know left in Serebrianka?

About ten to fifteen people are still there. Old people, but now there are volunteers working there too. Yesterday I called a man who helped us in 2014 to cover the [damaged] rooves. He said he’d help and get everyone out of there, because they haven’t had any water, electricity or new food supplies for a whole month.

Has your granddaughter suffered from psychological trauma?

I think so, but she’s a bit better now. When she went deaf in one ear, she couldn’t sleep at night. She was afraid, she would come running into my bed and lie down next to me, her eye was twitching. She was so afraid of that jet because it was so loud. I would tell her “Alenka, eat quickly, eat quickly, because now you need to go into your little nook.”

For all those 35 days she had a little nook where her bed was, surrounded by walls on three sides so she couldn’t get hit by shards from the window. I was so afraid for her. After this she started to fiddle with her hands and was very anxious.

Not long ago I was in the hospital with her (she had an infection). I was talking to the doctor, he prescribed her vitamins and said that if she carries on like that then she needs to be treated because it means she is traumatised. If she hears a bang then straight away she says “Granny, what is that?”

Even when loud cars go past on the street she looks and says “Granny, is it Russian soldiers driving?”. She’s still afraid now.

What were the attitudes towards Russian speakers like in your area?

In our area people mainly speak a mix of Russian and Ukrainian. But the majority are Russian speakers. My granddaughter can speak both languages really well. There were lots of people in the village who couldn’t speak Ukrainian at all, but no one had a go at them, no one forced them to do anything, no one looked down on them. In 2014 we got connected to a Russian TV channel. The Russians were saying that Banderovites had come to the Donbas to kill Russian speaking people. This TV channel scared people so much that they really started to believe that Banderovites had come to kill Russian speakers and they were really afraid. Then when the Ukrainian soldiers came and treated everyone well, they realized that the TV was lying.

Now Russian channels have been turned back on and have once again been saying “The Banderovites are coming, they must be destroyed. We will destroy them all with targeted strikes”.

I watched the TV and saw some military person talking about that. Because of this some people stayed behind to wait for this Russki Mir (‘Russian World’). But when they saw this Russki Mir start shooting at them, they left the village. That’s what it was like in our village. People even came up to me and asked “Is true that Ukrainian soldiers are coming to kill us? Aren’t you from there, from Western Ukraine?”. I was born in Lviv Oblast, in Skole Raion. They asked me, and I told them “Never forget that a Ukrainian soldier will never treat you badly. I know those people, I grew up there and I know that they are honest and fair. They will give away their last slice of bread, they’ll give the shirt off their own back to help you. I know those people.” They believed me, and that’s how we lived for eight years. Our soldiers were there but no one gave them any grief.

Were there any people who were looking forward to the arrival of Russian troops?

People were confused, they didn’t really know where to go. To begin with they didn’t really know who was shooting at us. But there were also a lot of people who were waiting for Russia. They even said that we would have Russian money. People divided up into those who were for Russia and those who were for Ukraine. That’s what it was like in February when the war started. Some people said “The Russians will come and things will get better, the prices will go down, the pensions will go up”.

They believed in this until they saw the missiles flying, until they saw who was shooting at us, who was destroying Kramatorsk, Lysychansk, Sievierodonetsk. Lots of people came to us from those places – barefoot, half-dressed, hungry. We helped those refugees. One young man with his wife and kid came to me, and they even believed that Russia would come and everything would be okay. I spoke to them and said, “Do you understand what is happening and who is shooting at us?” and he said “Now I understand everything”.

How has the war changed the thinking of the pro-Russian population of the village?

I think that after this war they ought to understand who the enemy is. And understand — not just in words, but in their hearts — that Ukraine is our homeland. That if they want to be Russians, then they can get up and go to Russia, no one is stopping them. But if they live in Ukraine then they should understand that Russia attacked us, it wasn’t Ukraine that fired first. Where’s the logic? Ukraine doesn’t strike its own people, it doesn’t kill children. But Russia attacked and is striking us. I think that after this war and all this horror that they’ve seen, they’ll understand. I think that everything will be okay.