Documenting war crimes in Ukraine.
The Tribunal for Putin (T4P) global initiative was set up in response to the all-out war launched by Russia against Ukraine in February 2022.
• Voices of war

‘There was nothing left of the neighbor, only shoes...’ 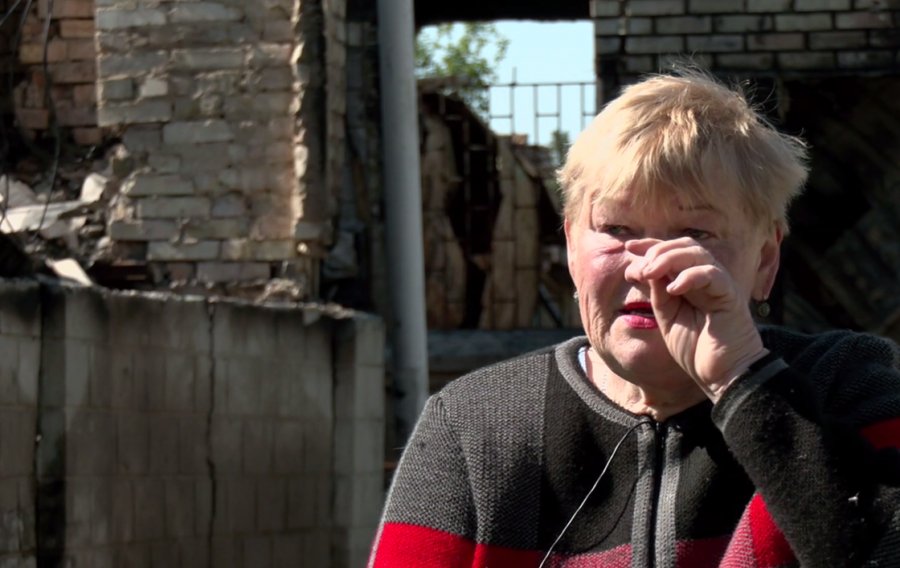 — My name is Kostenko Zynayda Yakovlevna, I am 67 years old. I live in the village of Moshchun, on Vyshnevoi [Cherry] Street. I have lived there all my life, studied at school, and graduated from a trade institute. When I got married, I remained in Moshchun and got a job. I worked as a salesperson in the village center for 32 years. I was a manager. As it turns out, I lived in the village all my life.

— What was the first day of the war like for you?

— On 24 February, I went to work early and opened the store at eight. I heard only a distant rumble. And then my friend, Oksana, who lived near the airfield, called. She said we are at war, and they are shooting at us. I said: “Are you sure?” It hasn't reached us yet, and it just rattled a little. She has children, one year and two months old, and a boy of twelve. They wanted to escape because Russians started bombing their house. I told her: “Come to us! It is quiet here.” So they came and spent two days with me as it was the only noise of artillery by us. On the 25 February, the light went out. There was still gas, but there was no light.

My husband said: “I called my friends. The Odessa highway is free so that you can drive.” They were from the Stanyshevsky district, and they decided to go. However, when we got up in the morning, we discovered helicopters flying! Our village is in a narrow valley surrounded by forest on both sides with a river in the middle. We were sitting in the room, and Oksana's husband said: “Aunt Zina, look, they are flying!” We saw about fifteen of these helicopters flying, and half an hour later, we heard the airfield being bombed again. After that, our friends left.

— Didn’t you think about evacuation?

— No, we were staying. Would I leave my place? No, of course not! My eldest daughter came to visit, but the younger one with the child (she has a son of fourteen years old) left. My son-in-law was calling on us to support his mother-in-law. His mother was here too. Who would touch us? Later, GRADs [The BM-21 “Grad” is a self-propelled 122 mm multiple rocket launcher designed in the Soviet Union] began to fly.

My daughter and I were feeding people from Teroborona [Territorial Defense Forces]. They were nearby. We cooked food for them. There was gas, so why not provide the guys with hot soup? I told them to come as we had tea and hot dishes. We fed them until 6 March, when we came out with the food, but they did not show up. Also, on 5 March, a neighbor's house burned down, and the neighbors came to our cellar. When the bombing started, we ran to the cellar and waited until the GRADs stopped hitting. We would go out as soon as it became quieter, but usually, it was already night. In general, we had a bedroom in the cellar. We took all the pillows off the sofa, and everyone sat there without getting out much.

We stayed until 6 March. When we discovered that there were no Teroborona people, I told my daughter: “Ira, if the guys left the post, then something is wrong here.” I called my son-in-law, but the phone did not work. Finally, he rushed to us and said: “What are we going to do?” At that point, the GRADs started firing again,  and we hid. When it was over, my son-in-law took a ladder to look at his house, which was on fire. He ran there, but I shouted: “Wait until they stop shooting!” They would start firing, take a break for about ten minutes, then shoot again. I prayed to God that he would reach a safe place and hide. Everything was on fire on the other side of the village. I repeated: “Lord if only he would get there!” Ira told me: “Mom, we cannot stay here. Get ready!” We went to the house, got dressed, and took a package with documents, a bag, and some money. Let's go!

— How did you escape?

— We ran to the other side of the village. On the way, we collected a neighbor because she was left alone. And the drone was flying near us. I said: “Let’s not walk together, so we are not in a group. Let's go one by one.” Volodya, my son-in-law, had the car and came to pick us up. We drove around the village but met not a single person. The village was like a ghost town, and I said: “My God, it's like a movie!” Everything is broken, something is on fire, and no houses around. It was terrifying. You leave your village, and you are scared. While we were driving, shells exploded behind us. It was no longer an escape but a horrifying experience. With the drone above our heads, I felt I could reach it by hand. I sensed how easy it was to perish.

— What happened to it? On 14 March, there seemed to be calm, and I sent the children to see what was happening there. When they showed me these pictures, I saw everything destroyed, broken, or burned, and two shell craters in my yard. Perhaps, the same shell hit the house. I think so because everything burned down at once. Even conserves burned down in the cellar! You can imagine what the temperature would be if the jars burned down. I had a cellar, a summer kitchen with a stove, a house, a shed with firewood, and a garage. Everything was destroyed, probably in one day. Two older people lived in the house next door. He was 86, and she was 83. They said they would not go because they were already old and no one needed them. She was killed in the cellar, and he was found dead in the yard. It looks like a missile killed him. Because in their yard, there was a similar hole as in mine. “Moskvich” or “Zaporozhets” [small cars designed in the Soviet Union] could be hidden there.

I think that on 4 March, a guy from Teroborona was killed. They had a car that went from post to post, and it broke down. He left it in the yard to repair. When the bombing started, he hid with his mother and friends in the cellar. Later, it seemed to have calmed down, Sasha came out, and a bomb had torn him apart in front of his mother. We heard screams and hysterics. The mother screamed because nothing was left of her son. Only the shoes were lying around. We took her to our place and began giving her sedatives to calm her down. I told her: “Lyuba, don’t scream! His mates will do everything right!” The guys collected what was left of his body, packed it in a bag, and buried it in the cemetery.

— Could you believe that there would be a war?

— No, I didn't believe it. My God! Is there not enough land in that Russia? It has so much land! Just plow and work like we Ukrainians. You will have everything if you work. Why are you invading a foreign land? I didn't believe it! Firstly, my father is Russian. A Russian grandmother raised me. I could not think that the Russians would attack the same people as they are. They do not know that Kyiv is older than Moscow. Where are you going? Do you want to rule over us? How far is it from Pushcha-Voditsa to Kyiv? Seven kilometers? They thought they would capture it in no time. The maps were from the seventieth, and they encountered settlements and people whenever they went. So many years have passed. They thought of passing through the forest, but no! Wherever they went, they found new developments. Life does go on. And they thought it was that simple.

— Were you preparing for war?

— On 16 February, my daughter (she works in the hospital) said: “Mom, the situation is uncertain, so gather what you need.” I replied: “The most important thing is the documents. so they don't burn down.”  In reality, I did not think they would burn the village. I felt that they would fight a little, and that's it. However, I put all the documents in an aluminum can, closed it, and put it in the cellar. I kept the essential things (passports and driving licenses)  in a folder. Am I capable of carrying a bag over my shoulders? In the end, only the tips of the files were burnt, but the documents were all intact. I told my daughter: “I'm 67. Who will touch me? Am I sitting with a machine gun or a pistol? I have nothing! If he wants to eat, let him eat.” People from Kyiv came here to hide. So many children came! They were afraid that Kyiv would be captured. When they started hitting our village with GRADSs, I told them: “My God, run away! Run away, somewhere!” Thanks to the volunteers who came in minibusses and took the children out. People left in draws with their children.

— What plans do you have for the future?

— We have no money. When we earn some, we will see what the situation will be. We need money to rebuild. It is much more than whitewashing the walls. It took us years to remodel and repair the house. Our parents survived the war, and now it is our turn. But we will survive!

— Has your attitude towards the Russians changed?

— We never paid attention to how stupid, helpless and ignorant they are. On the Internet, they show how the son says: “Mom, I am in captivity.” And she answers: “It is more profitable for me to kill you so that I will get more money.” Really? Is this a woman? She is not! Even the dog licks puppies, but she says this. It's unreal! Let them open their eyes and look! Life is wonderful,  and you have everything. You have land, health, and brains to accomplish something like other humans. What were you getting into and why? Are you listening to Putin? Did you get something from him? Nothing besides the evil on the whole planet. You are now rashists! [Rashist is the term used to describe Russian troops, it combines “Russian,” “racist,” and “fascist.”] Now, even if the Russian is sensible and intelligent, there is still distrust of him after such a war.