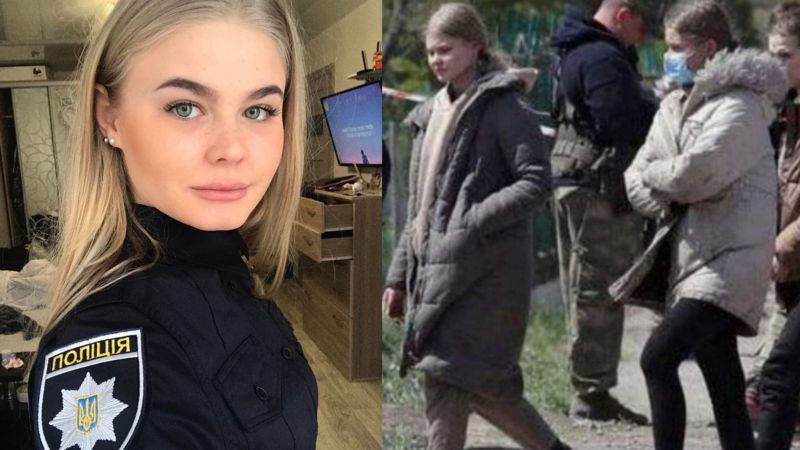 Mariana Checheliuk as a police lieutenant and on 1 May, as she left Azovstal with her 15-year-old sister Alina Photos provided by Mariana’s mother, Natalia

Mariana Checheliuk will be turning 23 on 5 January 2023 with her parents and  15-year-old sister, Alina not even certain where the Russia are imprisoning her.  At the beginning of May, the UN and Red Cross promised that the two sisters would be taken to government-controlled Zaporizhzhia after their release via a ‘humanitarian corridor’ from the besieged Azovstal Steelworks.  Instead, they were sent for so-called ‘filtration’ to Bezimenne in occupied Donbas.  The invaders released Alina, who is still a child, but took her sister away.

Mariana Checheliuk was born in Mariupol and went to school there, before graduating from the Police Academy in Kharkiv. She returned to her home city and had been working as a police investigator for around a year when Russia began its full-scale invasion on 24 February. Vitaliy Checheliuk said in a recent interview that they still don’t know how the invaders learned about his daughter’s work and stresses that, in any case, she was not working in any police capacity when seized.

Police colleagues had left the city early, understanding the brutality that any Ukrainian enforcement officers could expect from the invaders.  Mariana stayed, to be with her family and to help others.  Vitaliy says that he had never imagined a full-scale invasion and blockade, and by the time the danger became all too clear, the Russians were essentially preventing any safe evacuation.

Russian bombs totally destroyed their apartment block on 30 March.  The block, however, did not have a basement, so the family had for some time tried to survive, together with around 500 other civilians, in the basement of the House of Culture.  This is quite close to the Azovstal Steelworks which the Russians were mercilessly bombing every four minutes or so.

After the first week of the invasion, the family’s food supplies and water ran out and they were forced to leave the relative safety of their bunker, despite the constant barrage of Russian bombs and shelling.  There was a bakery near Azovstal with a still intact reservoir of water which residents were forced to try to reach. Vitaliy explains that his daughter actively helped elderly residents with getting water and food. He also confirms earlier reports that the Russians particularly shelled this place, clearly targeting civilians who could not survive without water. He says that civilians were killed there each day.

It was on 25 March, during one of those Russian attacks, that the family became separated, with Mariana and Alina fleeing from the Russian shelling into the territory of Azovstal.  The bunkers of the steelworks remained under the control of Ukrainian defenders until the middle of May, and it was they who enabled the girls to contact their parents and at least tell them they were alive.

The invading forces knew very well that up to a thousand civilians, including children, had sought shelter at Azovstal, yet continued their savage bombing of the vast territory of the steelworks throughout April.

Vitaliy explains that the Russians kept sabotaging attempts to organize the evacuation of civilians.  On 1 May, however, a humanitarian corridor was created, with both Mariana and Alina among hundreds of civilians who were allowed to leave the steelworks.  The UN and Red Cross who were involved in negotiations over this did, however, claim that all would be taken to Zaporizhzhia which remains free, under Ukrainian government control.  “However they were taken to occupied Bezimenne, with it claimed that people needed to undergo filtration and that they would soon be released.”

While it is Russia that is so brazenly violating international law in its imprisonment of civilians, this is not the only occasion where the role of the UN and Red Cross has aroused, at very least, frustration. It had been known that Russia was abducting and, often, savagely torturing civilians since the beginning of its full-scale invasion (and earlier).  There was every reason to fear, as happened, that civilians would not meet the invaders ‘filtration requirements’ and would not be released.

Bezimene is within the Russian proxy ‘Donetsk people’s republic’ [‘DPR]] and it was, seemingly, DPR officials’ who got Alina to ring her family and tell them that they must collect her from Bezimenne within 24 hours or she would be placed in a children’s home. They were, thus, able to at least rescue their younger daughter.

Vitaliy explains that they were initially told that Mariana would be freed within two days, then within a week.  Later there was either silence or total denial that they were holding her prisoner.  Alina has explained that, on 1 May, they were taken for this supposed ‘filtration’ to a tent city in Bezimenne and that a person from Russia’s FSB [security service] had turned up and taken her sister away.  In tears, Alina pleaded with him to leave Mariana alone, but he merely threatened the young girl that she would be thrown into a children’s home.  It was learned later that Mariana had been forced into a vehicle and taken to occupied Donetsk.

Since then, Mariana Checheliuk has been allowed just one brief call to her family. She was mainly concerned to learn about her little sister, and her parents suspect that the FSB used Alina’s fate as a weapon to put pressure on the young woman.

Essentially nothing more is known with any certainty.  It is believed that she was held at the Olenivka prison, which former hostages and POWs call a concentration camp for up to four months.  Vitaliy clearly believes that his daughter was at Olenivka at the time of the ‘unexplained explosion’ on 29 July that killed over 50 Ukrainian POWs.  Here too the role of the UN and International Committee of the Red Cross has been confined to rather meaningless, and therefore misleading, statements of good intentions to investigate.

Natalia Checheliuk earlier explained that the phone call had been a month after her daughter was taken prisoner.  Later, a freed volunteer told them that she had been taken to Olenivka on 27 June.

All information has been from those who have finally been freed from Russian captivity.  In October, some female POWs, released in an exchange, were able to pass on that they had seen Mariana in the SIZO [detention prison] in Taganrog (Russia).  The conditions there are known to be horrific and effectively tantamount to torture.  It is, therefore, likely that the young woman was first held, reportedly in solitary confinement, in occupied Donetsk, then in Olenivka, and was at some stage taken to Russia.

They have managed to get Mariana included on the exchange list, however the Russians are refusing to release her, or even confirm her whereabouts.

Please help to publicize Russia’s imprisonment of Mariana Checheliuk!  All such publicity puts pressure on the aggressor state and can help to get her released.