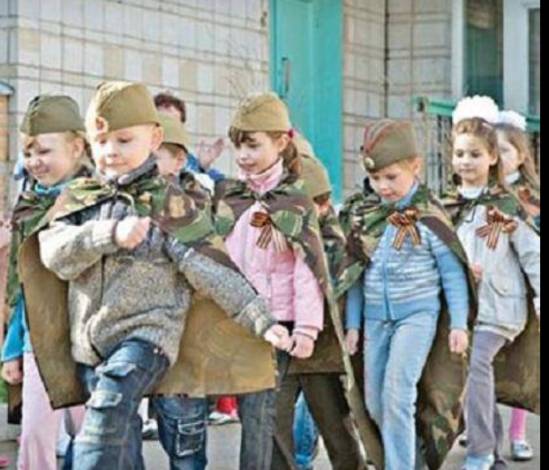 Russia is planning to introduce compulsory ‘basic military training’ in essentially all educational institutions, with such courses teaching children and young people not only how to use a Kalashnikov rifle but how to ‘interpret’ political events from the point of view of a ‘patriot of Russia’, i.e. following the Kremlin line.  Moscow has intensified military propaganda and brainwashing since its full-scale invasion of Ukraine, but this formalizes courses that are clearly aimed at brainwashing young people and preparing a new generation willing to fight and die in the name of a grotesque distortion of ‘patriotism’.  The situation is especially acute given that such courses will be ‘taught’ in areas of Ukraine currently under Russian occupation, with young Ukrainians taught to view Ukraine as ‘the enemy’.

If, as is planned, Russia introduces ‘basic military training’ in schools and higher institutions, it will be reinstating yet another part of the old Soviet system of education.  At present there is a course in the basics of health and safety, which, according to Russia’s education minister Sergei Kravtsov, already contains elements of military training.  The planned course on the basics of military training will certainly include important training in first aid, however children and young people will also be learning how to load and shoot from rifles and other similar activities directly linked with war.

The idea to reintroduce such military training was supposedly put to Russia’s ministry of education in October, with reports in November 2022 asserting that the initiative was supported by deputies ‘from all parties’ in the State Duma, as well as by the defence and education ministries.  The proposed course would be compulsory with as much as 140 hours set aside during the last two years of school.

Typically, most of the reports claim that calls for the introduction of such military education are coming from ‘the public’.  Kravtsov’s announcement that the course would be introduced from the beginning of the next school year (September 2023) was reported together with a supposed ‘public opinion poll’ by an outfit called ‘Superjob.ru’ which claimed that two out of three parents of teenagers supported the course.  Given cases of persecution of parents if their children do not attend the new propaganda ‘conversations about important things’ and prosecutions for any expression of opposition to Russia’s war against Ukraine, the results of any such telephone surveys should probably be treated with caution.  One in six refused to take part altogether, and it is not guaranteed that those who agreed would have felt confident to express opposition to such military training.

On 29 December, the Russian newspaper Kommersant reported that “a course of training for the army” will also be taught at higher educational institutions. Although the newspaper reports that the course “may appear” from 1 September 2023, it says that several universities told Kommersant that they had already received the relevant program from the education ministry.  The accompanying letter drawn up by the education ministry, together with the defence ministry, asserts that “in modern conditions, training of citizens of the Russian Federation to military service is a priority of state policy. The most important questions in education at all levels are the teaching of love for the Motherland, the sense of patriotism and readiness to defence the Fatherland.”

Kommersant explains that students will have to learn to dismantle and assemble AK-74 and RPK-74 rifles and machine guns, Makarov pistols, and also undergo training on use in fighting of hand grenades. In addition, students will be taught to assess “international military-political and domestic events and facts from the position of a patriot of their Country”.

There is no scope for doubt as to what this means. Teachers in Russia (and probably occupied Crimea) were sent instructions on ‘a special social studies lesson’ on 1 March 2022. They were told to present Russia’s invasion of another country’s sovereign territory and bombing of civilian targets as ‘self-defence’ and to repeat Russian leader Vladimir Putin’s deranged claims about his ‘special operation’ being about “the demilitarization and denazification of Ukraine”.  While it is claimed that the so-called ‘conversations about important issues’ are about ‘discussion’, there is only one accepted view, and, as mentioned, children who do not attend and / or their parents have faced serious problems.  These can include administrative, or even criminal, prosecution for telling the truth about Russian atrocities in Bucha or missile strikes on hospitals, schools or residential buildings.  It is also not safe for teachers to express any, but the official, position on the war, with this leading to, at the very least, dismissal, but sometimes also to prosecution.

This is of major concern in Russia itself, but is also one of Russia’s most egregious war crimes since such militarization and indoctrination are being carried out in occupied Crimes and Donbas.  Similar efforts are also underway in those parts of Ukraine which fell to Russian occupation after 24 February 2022.  In Crimea, there have been systematic efforts since 2014 to brainwash children and young people and to crush their Ukrainian identity.  Russia has already begun military propaganda in cities like Mariupol that it virtually razed to the ground, with children taught that this was ‘liberation’ and that they should want to fight and, perhaps, die for the aggressor state which shattered their lives.

Many children in occupied Crimea and Donbas will have little chance of checking the lies they are fed against their own experience or other sources of information.  Parents or teachers, even if secretly appalled by such brainwashing, may be afraid to put themselves or the children in danger by telling the latter the truth.  Russia has, after all, revived one of the most repugnant elements of Soviet reality – denunciations, with children sometimes reporting teachers, or vice versa.