Russia begins propaganda of war against Ukraine at pre-school level 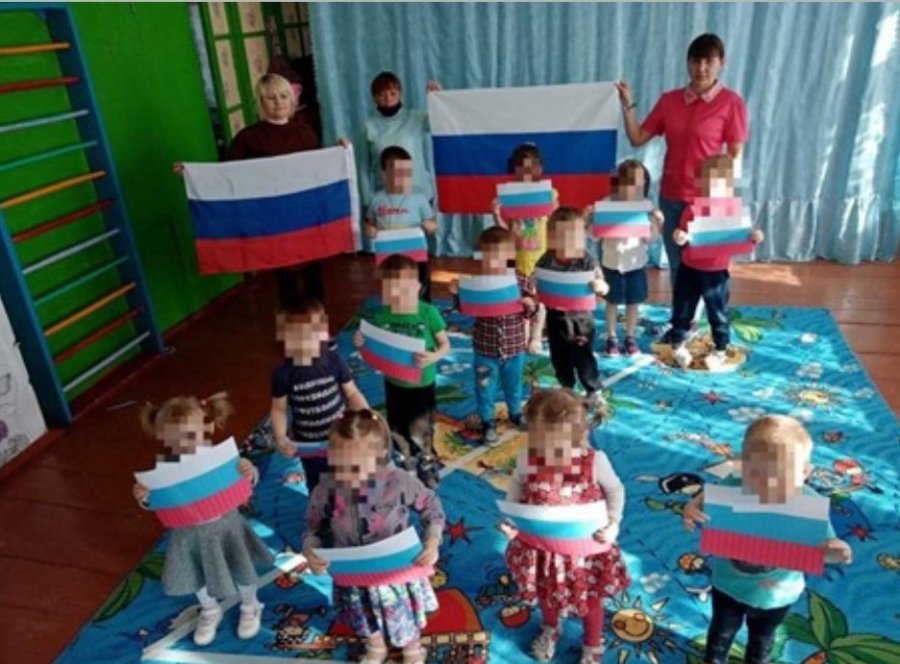 Russia’s militarization of childhood at home and in occupied Crimea has been of major concern since 2014, and appears to be now reaching new depths.  Children as young as four are used to take part in pro-war stunts and kindergartens and schools are procuring military costumes and toys for the children.  The situation is particularly shocking in occupied Crimea, where the schoolchildren reportedly forced to send ‘letters of gratitude’ to soldiers fighting in Ukraine may well have family now being bombed or shelled by those same Russian invaders.

Less than a week after Russia began its full-scale invasion of Ukraine, Russian teachers received instructions on giving a special ‘social studies lesson’ in all Grades 7-11 classes on 1 March.  As the invaders continued to bomb and shell civilian targets in Ukraine, the teachers were told to present Russia’s actions as ‘self-defence’. They were to present the ‘arguments’ given by Russian leader Vladimir Putin for what he called ‘a special military operation’ and to condemn calls to take part in anti-war protests.  Needless to say, no mention was to be made of children either killed in bombings or forced to hide in bomb shelters. By 4 March, Russia had passed even more draconian legislation, introducing administrative or even criminal liability (with long prison sentences) for telling the truth about the war.

Younger children cannot be presented with ‘arguments’, but that does not mean that they have been forgotten.  In various villages of the Kurtamysh Municipal District, various stunts took place in support of what Russia calls ‘the Crimean Spring’ (namely its invasion and annexation of Crimea) and of the full-scale invasion which Putin entitled ‘a special military operation’.  At least one such stunt involved children aged three or four, positioned to form the ‘Z’ which has become a symbol of Russia’s war, and to wave Russian flags.

On this occasion, the children were dressed in normal clothes, but, according to a report published by Verstka Media, that looks likely to change.  Verstka and the Telegram Channel ‘We can explain’ have tracked down a number of state procurement orders placed for children’s military costumes and / or military toys.  A kindergarten in Salekhard, for example, has ordered eight ‘tank-driver’ costumes, one of a (presumably military) pilot and eight costumes entitled ‘military camouflage’.  They also asked for five play tank-driver helmets.  Altogether, this would make it possible for 24 children (one entire kindergarten group, or two) to effectively play war in Ukraine.  Another kindergarten in Nizino (Leningrad oblast) was not content with military uniforms alone, but ordered toy weapons (Kalashnikov rifles, revolvers).  The report provides details of several such orders in different parts of Russia, all of them for pre-school children.  The largest order included police uniforms and chevrons for the traffic police or police and cost an incredible 6.2 million roubles.

As mentioned, Russia’s militarization of childhood did not begin in February 2022, and the report notes that there were at least 14 orders from kindergartens for military costumes in 2021.

According to Danil Ken, head of the St Petersburg branch of the Alliance of Teachers Union, they receive very many letters and complaints both from teachers and from parents regarding the military propaganda. “In kindergartens, this is most often cutting out the figure Z and pasting it on the window, or triangle letters ‘to the heroes of the special operation’.  Nobody has written to us specifically about the [military] toys, but the kindergarten ‘parades’ in tanks and planes for 9 May received widespread publicity”.

Whether or not, such activities have any impact at pre-school level, they are part of a major propaganda drive which, among older children is certainly aimed at glorifying war and encouraging children to want to join the military. 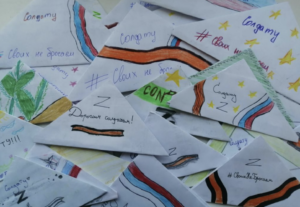 The situation in occupied Crimea is especially acute.  Since its invasion and annexation, Russia has spent vast amounts of money on efforts to turn children into so-called “new citizens” and “patriots of Crimea” who would be willing to fight and die “for Russia” (against Ukraine).  Both the fact that Russia actively encourages children to want to join Russia’s army and its imposition of conscription on occupied territory are in clear violation of the Fourth Geneva Convention.  This states clearly (in Article 51) that “The Occupying Power may not compel protected persons to serve in its armed or auxiliary forces. No pressure or propaganda which aims at securing voluntary enlistment is permitted”.

Russia is also pushing its ‘Yunarmia’ or ‘Youth Army’ which has, and not without reason, been compared to the Nazis’ Hitlerjugend.  Around 4,000 Crimean children were recruited into this militaristic body in 2021, with the overall number from occupied Crimea having reached 29 thousand.

Russia is actively trying to eradicate Ukrainian identity and replace this with so-called ‘Russian patriotism’ and the belief that the children should be willing to die for the country which first invaded their peninsula, and is now waging a genocidal war against all of Ukraine.