Russia persecutes Crimean Tatars, destroys their heritage because they expose the lies about its annexation of Crimea 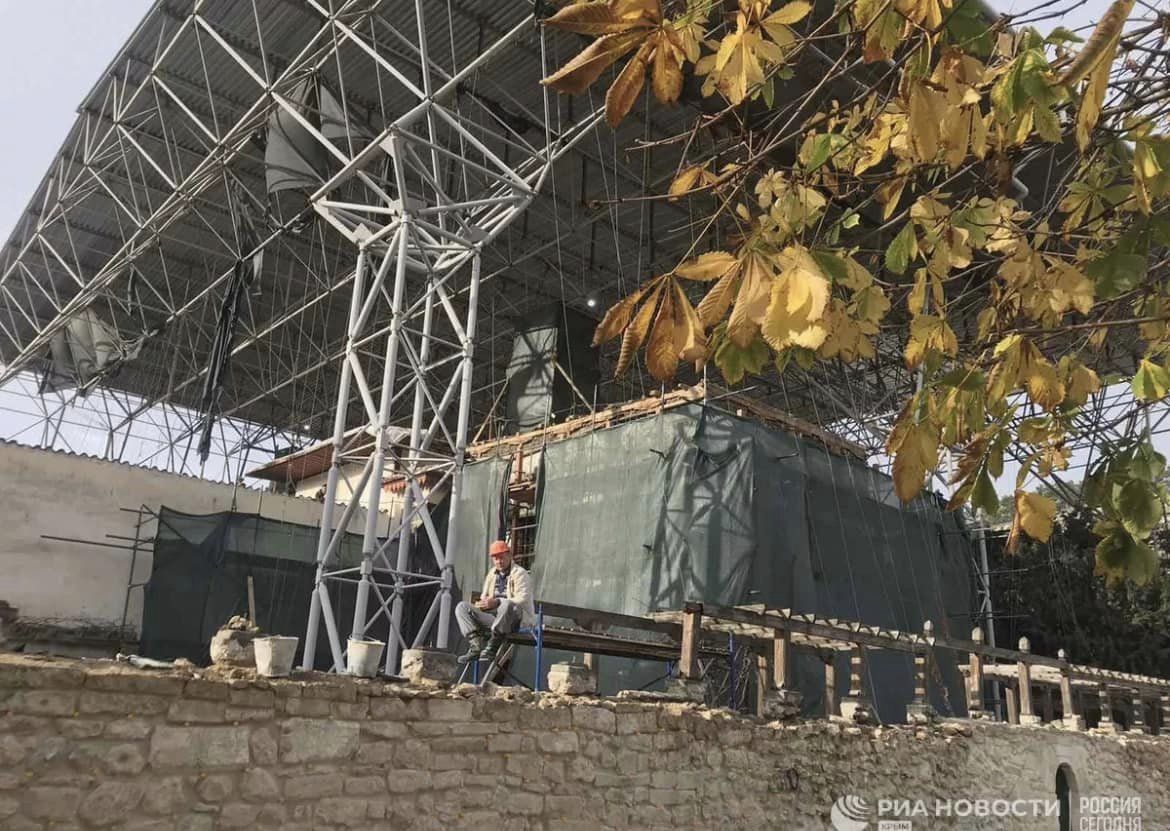 Russia’s destruction of the Khan’s Palace [or Hansaray] in Bakhchysarai has reached tragic proportions with a monument of huge historical and cultural significance for Crimean Tatars and for Ukraine being stripped of its authenticity and turned into a shoddily renovated ‘new-build’.  The former Director of the Bakhchysarai Historical Cultural Reserve, Elmira Ablyalimova is not alone in believing that Russia is deliberately destroying a crucial monument for Crimean Tatars, one that clashes with the ‘Russian world’ ideology that Russia is using to justify its invasion and ongoing occupation of Crimea.

In a recent Ukrinform interview, Ablyalimova spoke both of the disastrous damage that Russia is causing the Khan’s Palace in Bakhchysarai, under the guise of ‘restoration’ and of its claimed ‘evacuation’, in fact, plundering of museum collections

Russia, she explained, uses historical monuments, museums, etc. if they can be fitted into their ideological narrative, as political tools. They claim that Crimea was ‘always Russian’ and that ethnic Ukrainians are “the same people” as Russia in order to then try to appropriate such ancient monuments as Chersonese as ‘Russian’ [see Russia is destroying ancient Chersonese to distort history and legitimize its occupation of Crimea ).

Russia’s cultural imperialism, Ablyalimova says, has a problem with the Crimean Tatar people.  It therefore concentrates on them being different, “enemies whose history should be ignored or rewritten, doing everything to destroy evidence of the people’s existence, memory of their existence.”  This is not done openly, of course, but that is effectively what the supposed ‘restoration’ of Khan’s Palace is achieving.

The complex, whose earliest buildings date back to the 16th century, was originally built as the main residence of the monarchs of the Crimean Khanate - the state of the Crimean Tatar people – and was the political, religious and cultural centre of the Crimean Tatar community until Russia’s first annexation of Crimea and the collapse of the Khanate in 1783.  Indeed Ablyalimova notes how history is repeating itself since it was after that first annexation that the Russian empire first began ‘rebuilding’ the complex, with some of the buildings demolished, walls painted, etc. 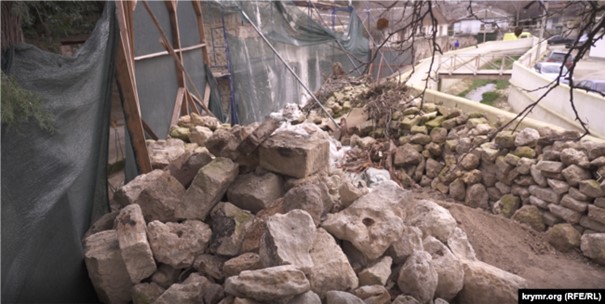 The fence around the Embassy Courtyard reduced to rubble Photo taken from Crimean Realities (Krym.org)

After Stalin’s Deportation of the entire Crimean Tatar people in 1944, most monuments and places of historical and cultural significance for Crimean Tatars were destroyed.  It took Russia, under the regime of Vladimir Putin, only two years following the invasion of Crimea to begin destroying the Khan’s Palace, albeit “with velvet gloves”, by calling it ‘restoration’.  The complex Bagçesaray Palace of the Crimean Khans was placed on UNESCO’s World Heritage Tentative List back in 2003, however Ukraine had not yet managed to finish the follow-up work before Russia’s invasion.  Russia has probably caused such irreparable damage to the site as to end any likelihood of World Heritage status.  While only part of the complex is even open to the public at present, the photos and video footage that have been smuggled out since 2017 show that Russia has destroyed authentic parts of the complex and may well have placed the very stability of certain structures in danger.

Comments made last year by Russian-installed Crimean ‘leader’ Sergei Aksyonov indirectly corroborate Ablyalimova’s conclusions. In mentioning what the UNESCO document describes as “the political, religious and cultural centre of the Crimean Tatar people in the time of the Crimean Khanate”, he did not once mention Crimean Tatars (or the Khanate).  Whether or not it is coincidence that Aksyonov even sounds like Putin, he is certainly echoing the Kremlin in doing everything to deny the indisputable fact that the Crimean Tatars are the main indigenous people of Crimea. Their identification as part of Ukraine is of critical importance and their monuments, history and culture form an integral part of Ukraine’s cultural and historical heritage (details of Russian hysterical denial of this here).

The appalling consequences of Russia’s supposed ‘restoration’ first became clear by the beginning of 2018.  Without any justification, the Russians had removed literally all of the original and very beautiful titles on the Palace roof and replaced them with factory-made ‘old-style’ Spanish tiles.  Each tile on such a building should have been made by hand, using original technology, and most were, in any case, not in need of replacement.   Crimean Realities produced an important video showing both the complex before Russia’s invasion, and the damage now being caused it.  At the time, Ablyalimova pointed out that parts of 16th century walls under the roof of a mosque had been broken off while authentic stones are left lying around as if rubble.

The following include both new aspects of the barbaric destruction of the complex and those already reported.   In the above-mentioned interview, Ablyalimova said that there has been irreparable damage and concludes that “we are losing this monument”.  So-called ‘restoration work was being carried out, she noted, even where this was not needed, with parts of the complex placed in jeopardy, and the work generally changing its appearance.   In December, for example, she reported that the roof of the famous Golden Cabinet of the Khan’s Palace had been dismantled, together with the stained glass windows.

There have been a huge number of contractors over the past 4-5 years, and corruption is doubtless playing some role.  Ablyalimova, however, suspects that the occupation ‘authorities’ are now themselves realizing the full scale of the devastation that has been wrought and are looking for scapegoats onto whom they can shift the blame.  Neither the corruption, however, nor the fact that contractors and ‘experts’ were brought in from Russia with either no experience of restoration at all, or none of conditions in Crimea, can change the barbaric nature of this attack on a symbol of Crimean Tatar statehood and identity.

One of the earlier decisions by contractors with no experience of restoration was to replace all of the oak beams on one of the roof coverings , as well as elsewhere, with glue composite planks put together using OSB {oriented strand board) technology (a solution rather like plywood!).  As with the replacement of all the original tiles, this was entirely unnecessary.  A study carried out by Ukrainian specialists before 2014, and confirmed even under Russian occupation, had found that of the 22 joints of the roof covering, one three needed to be replaced, and one restored.

The Russian contractors used heavy construction equipment, such as hydraulic drills, for dismantling work, with this causing vibration and leading to cracks in the walls and wall paintings and finishes being damaged or completely lost.  In February 2022, for example, it was learned that a large crack has appeared on the wall of Svitsky Corpus [Retinue Corps].  The damage to a building that had, in 1927 had survived a large earthquake, was so evident that even the occupation regime and Russian-controlled media did not try to conceal it.  They did, however, come up with preposterous claims and excuses for what was essentially inevitable given the fly-by-night firms that are hiring unqualified labourers and using totally inappropriate equipment and materials.

Contemporary restoration technology makes it possible to provide the required fastening of parts of a monument needing restoration without dismantling it and without causing any significant damage.  The Russians either didn’t know about this or didn’t care.  They replaced the original materials used for beam and girder system and roof of the Big Mosque with contemporary construction technology, including the same OSB technology to replace the authentic oak beams.

The tiles removed were carefully packed and doubtless ended up on the sumptuous villa of the Russian officials, propagandists, etc. making use of stolen land since Russia’s invasion.  In November 2022, Edem Dudakov, former head of the Crimean Committee on Inter-Ethnic Relations and Deported Peoples, reported that the beams barbarically removed from the roof of the Big Mosque and other buildings were now being sold as logs, presumably as firewood.

The scaffolding around the minarets of the Big  Mosque may be because they are planning to simply dismantle these, or to stabilize them because of the damage they have already caused.  They have effective reduced parts of the complex to ruin

Among the excuses Russia has tried on for its vandalism is the claim that the work begun in the winter of 2017 was needed because the Ukrainian authorities had let the complex fall into disrepair and that the roof of the Big Mosque was about to collapse.  In reporting the destruction to the Svitsky Corpus in February 2022, Dudakov provided video footage proving that this was quite untrue.

His imprisonment for telling the truth about Russia’s destruction of the Khan’s Palace in Bakhchysarai epitomizes Russia’s repression against the Crimean Tatar people and its attempt to destroy a monument of Crimean Tatar heritage.  The Khan’s Palace, like the Crimean Tatars as the indigenous people of Crimea and as Ukrainians, expose the lies behind all of Moscow’s ‘Russian world’ ideology, distortion of history and myths about Crimea.