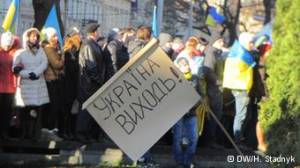 The placard reads: Ukraine, come out (in protest)!

Deutsche Welle reports that the most active speakers on the Lviv EuroMaidan began receiving summonses to the prosecutor on Monday, together with two Lviv City Council members – Taras Choliy and Andriy Shevtsiv.

Choliy says that he is being questioned over a speech on Dec 8 under Article 161 of the Criminal Code – inciting ethnic enmity.  He claims that he didn’t even touch on ethnic or religious issues, and spoke about general issues, saying that they were fighting  for social justice, against the regime, about corruption feeding a criminal system.

Head of the public council attached to the Lviv Regional Interior Ministry, Oleh Ilkiv advises opposition parties to ensure that their office papers are in order; to hire a lawyer; install video surveillance equipment; and even to make sure that all software is licensed.  “They can go for anything”/

Ilkiv points out that the Law on the Police categorically prohibits inflicting blows with rubber batons to the head, neck, collarbone, stomach or genitals. The video footage of Berkut riot police behaviour on Bankova St on Dec 1 shows that the police hit people around the head.  Any use of special means, including gas, needs to be preceded by a warning.  Since on almost every occasion where teargas or other has been used over the last three years, the police have denied using it until the proof made further denial impossible.  Under those circumstances it seems clear that no warning has been applied.