Open Statement to the International Democratic CommunityBorys Gudziak: Spread the story of their courage and fortitude!Maidan: "I came because I couldn’t not come"Hundreds Injured in Kiev as Riot Police Crack DownInternational Renaissance Foundation breaks off collaboration with Ukrainian authoritiesUHHRU calls for President’s Impeachment and Dismissal of GovernmentPolice action incompatible with democracyBerkut violently breaks up EuroMaidanUS warns of consequences if EuroMaidan dispersedThugs attack Channel 5 film crew near pro-government rallyHromadskie.tv journalists beaten up in centre of KyivNo will to investigate harassment of journalistsNew political season brings journalists increased threats and intimidationCases of censorship and obstruction tripleTitushko and fellow assailants receive suspended sentencesAssaulted journalists angered by whitewashing of passive police officersOutrage and police excuses over Berkut violence against journalistBerkut riot police disperse peaceful protest on Independence SquareMore Clashes with police and protesters’ versions differing radicallyVradiyivka: Rule of Force rather than Rule of Law
• Рубрики / Кримінально-виконавча система
•
•
• 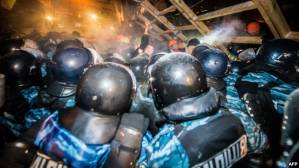 With Ukraine’s present economic difficulties, it is legitimate to ask who is paying for the pro-government demonstration and other preparations underway for this weekend – and why.  Not only are public sector workers and miners being transported to Kyiv in large numbers, but also police officers recruited for their brawn, boxing skills etc. There are disturbing indications that titushki, or hired thugs, are also arriving in force.

Demonstrations and counter-demonstrations are common enough and it should not be inconceivable that government supporters might also want their say.  In fact, however, the comfortable coaches being laid on and ruling Party of the Regions regalia handed out do make the event seem rather unconvincing.  The differences between the pro- and anti- demonstrations are certainly marked.  International correspondents have little difficulty in learning why participants in the EuroMaidan demonstration are there, with people eager to explain their reasons for supporting EU integration, for anger over violence against peaceful protesters, etc.  When a BBC correspondent tried to ask pro-government demonstrators similar questions, the latter moved away, obviously having nothing to say.

In most eastern regions public sector workers and miners, especially those in State-owned mines, are being coerced into travelling to Kyiv.  Nobody is putting a gun to their heads, but they know well that their jobs will be on the line if they don’t.  There have been enough complaints to human rights groups and the media to be certain that the practice is widespread.

A fair number of people are going because they have been offered money to do so.  The figure most often heard for “ordinary demonstrators” is 300 UAH, (around 30 EUR) which for many people, especially in the regions, is a significant enticement.

The contrast to the early hours of Dec 11 when interior ministry forces began ripping down the EuroMaidan barricades could not be more pronounced.  As well as the bells of St Michael’s Cathedral ringing as in the past to warn of danger, calls for help sped through all social networks, and people began mobilizing.  By early morning, some 25 thousand had gathered.

With most television channels now demonstrating much less willingness to simply present the government’s position, the propaganda value of such a staged pro-government rally at first glance seems limited.

Close scrutiny, however, gives a much more sinister picture.  The expenses thus far mentioned are already considerable, however nothing in comparison with the figures required for other costs.

The number of police officers being recruited is hard to estimate, since it depends very much on the size of the place, however the Kharkiv Human Rights Group is aware of 25 having been selected from Severodonetsk, with a population of 100 thousand.  Rubizhne which is a third the size is sending 7 men.  The Kharkiv Interior Ministry University is sending all its third and fourth year students, with coaches laid on.  As mentioned, the criteria are highly specific, with physical strength and fighting skills being premium.  The money offered is, by police standards, enormous: 800 to 1000 UAH per day, with people being taken on for 5 days – from Saturday to next Wednesday.

As reported, on Dec 1, during a pro-European integration demonstration attended by around half a million people, there was almost no police presence at all except around the president’s administration and the government buildings.  It was, incidentally, only those places with large police contingents which saw any significant trouble.  A week later there were at least twice as many demonstrators, still little police presence adn also scarcely any trouble.

It is therefore highly unlikely that burly police officers with boxing and other combat skills have been recruited to protect the public over the next five days.  All experience indicates that the titushki or hired thugs are also expected to perform an entirely different, much more violent, role, and a very large number are being brought in to Kyiv.

The last two weeks have not only demonstrated the authorities’ readiness to use excessive force against totally peaceful protesters.  A number of prominent Ukrainians have just issued a statement to the international community in which they warn of a crude attempt by the “Government and their local and Russian political technologists” to discredit EuroMaidan. They explain that over a dozen louts with swastikas daubed on helmets and steel reinforcement rods tried to push their way onto Maidan and then pick a fight with the police.  The aim was clearly to present the protesters as neo-Nazis and turn Ukrainians and the international community against them. That attempt was, thankfully, thwarted by the protesters.

At present, EuroMaidan demonstrators are steeling themselves, and instructing everybody on how to recognize provocateurs and prevent them from deliberately causing trouble.

The scale of the current movements, however, gives extremely serious grounds for concern.  It is unclear whether the aim is to stir up trouble and provoke a crackdown, enabling the imposition of a state of emergency, or simply to discredit the demonstration in support of European integration.  Some suggest that Putin stipulated pacification of EuroMaidan as a condition for the highly secretive agreement between the Russian and Ukrainian presidents.  Whatever the motives, in a situation where there will be crowds of people on the streets, the authorities are demonstrating a terrifying disregard for the conceivable human cost of irresponsible power games.