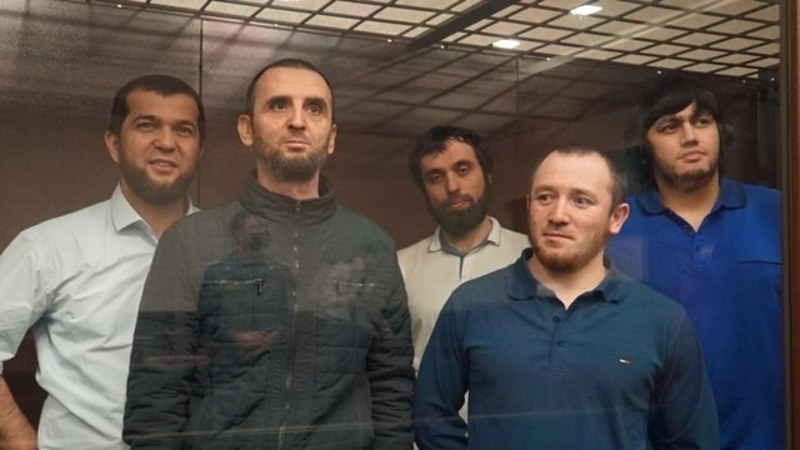 While intensively bombing and killing Ukrainians, Russia is still finding time for the repression it has inflicted on those parts of Ukraine seized after its first invasion eight years ago.

A Russian prosecutor has demanded 15 and 16-year sentences against five Crimean Tatar civic activists essentially accused of discussing ‘courage’, Russian persecution and religious questions back in 2016.  Russia has divided its worst attack on the Crimean Tatar human rights movement into five cloned ‘trials’, with the size of the first ten sentences thus far sought suggesting that the 25 civic journalists and activists could, altogether, be sentenced to well over 400 years’ imprisonment, without any recognizable crime.

During the hearing on 3 March at the notorious Southern District Military Court in Rostov (Russia), the Russian prosecutor claimed that the men’s ‘guilt’ had been proven and demanded the following sentences: Akim Bekirov – 15 years; Seitveli Seitabdiev – 15 years; Rustem Seitkhalilov – 15 years; Eskender Suleimanov – 16 years; Asan Yanikov – 15 years.  All of these sentences would be in harsh-regime Russian prison colonies, with the first three years in a prison, the very worst of Russian penitentiary institutions. In each case, a further 18 months’ ‘restriction of liberty’ was asked for after the main sentence.

Russia’s invasion of Ukraine led to a brief interruption in these conveyor belt ‘trials’, however it is likely that the first five sentences will be passed soon.  Crimean Tatar journalist Remzi Bekirov is facing a sentence of 18 years; human rights activist Riza Izetov – 18.5 years and three civic activists - Rayim Aivazov; Farkhod Bazarov and Shaban Umerov  18.3 years; 16 years and 18.5 years, respectively.

In a letter to Remzi Bekirov in Russian captivity, former US Ambassador to Ukraine William Taylor wrote the following:

“let me express my strong support for your struggle for freedom and my admiration for your dignity. Your work as a journalist in Crimea is the essence of courage and commitment – courage in the face of Russian oppression and commitment to the principles of freedom and independence. Ukrainians fought for those principles during the Orange Revolution and the Revolution of Dignity. You are fighting for them from an unjust prison.”

While Remzi and three other civic journalists: Osman Arifmemetov; Rustem Sheikhaliev and Ruslan Suleimanov are the most well-known, all 25 men were seized and are facing horrific sentences for their civic position.  Most were active in the vital human rights initiative Crimean Solidarity.

The mass operation on 27 March 2019, with armed searches and the arrests of 23 Crimean Tatar civic journalists and activists prompted international condemnation and demands for the men’s release, from, among others, the US State Department, Human Rights Watch, Freedom House and Civil Rights Defenders.  All were swiftly recognized by the Memorial Human Rights Centre as political prisoners.

Not only did Russia ignore such international outrage, but it made two other arrests, with one of the men, Rayim Aivazov, also savagely tortured.

It is likely that the international attention later prompted the decision to divide one ‘trial’ into five identical ‘clones’, with the same dodgy ‘secret witnesses’, FSB-loyal ‘experts’, and the identical conversations forming the basis for each ‘trial’.  Five clones made it much less likely that foreign diplomats and international rights and media NGOs would closely follow and, hopefully, attend the ‘trials.’

All of the men are charged only with ‘involvement’ in the Hizb ut-Tahrir movement, a peaceful transnational Muslim political and religious organization which is legal in Ukraine and which is not known to have carried out acts of terrorism anywhere in the world. Russia has never provided any grounds for its highly secretive 2003 Supreme Court ruling that declared Hizb ut-Tahrir ‘terrorist’, yet this inexplicable ruling is now being used as justification for huge sentences on supposed ‘terrorism charges’.  Not one of the men is accused of any actual crime, and the additional charge of ‘planning to violently overthrow the Russian state’ is not based on any evidence at all.  The first ‘five’ (Remzi Bekirov) and those with him are facing the more serious charge of ‘organizing a Hizb ut-Tahrir group’ under Article 205.5 § 1 of Russia’s criminal code, the others with involvement in such an alleged group (Article 205.5 § 2).  It usually seems very arbitrary and only a question of the length of sentence which charge a person faces.  This time, however, there are very strong grounds for believing that Rayim Aivazov was reclassified as an ‘organizer’ after he refused to be silent about the torture he was subjected to following his arrest during the night from 16-17 April 2019.

Although the sentences demanded in these cases are much higher than those normally passed by Russian courts for murder, the only ‘evidence’ sought is of ‘involvement’ in Hizb ut-Tahrir, and here too no real proof is required.

As mentioned, the charges were essentially based on illicitly taped conversations between the 25 men on religious, political and other, entirely innocuous, subjects back in 2016.  Transcripts of the scarcely audible conversations were sent to FSB-loyal ‘experts’ who essentially provided the assessments demanded of them. During one of the hearings, the defence established that nobody has seen the original tapes of the conversations.  The defence questioned two experts who carried out a phonoscopic examination and confirmed that there were signs of interference on the tape.

There are absolutely no good grounds for keeping any ‘witnesses’’ identity secret and there is very strong evidence that men are being tortured or threatened with imprisonment if they do not agree to ‘cooperate’ with the prosecution.  Such collaboration almost certainly includes acting as ‘secret witnesses’.

The letters tell them they are not forgotten and show Moscow that the ‘trial’ now underway is being followed.