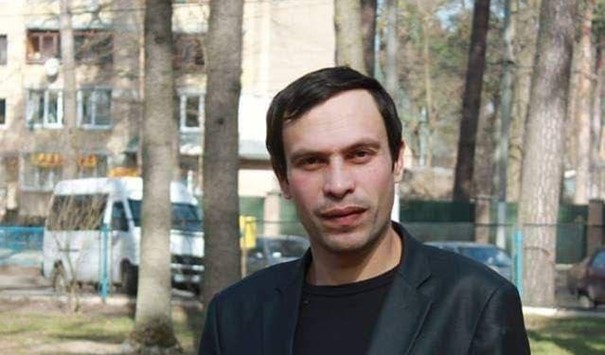 Zoreslav Zamoisky, a freelance journalist from near Irpin (Kyiv oblast) should have turned 44 on 12 April.  Instead, the Irpin City Council reported on that day that Zamoisky’s body had been found on the street in Bucha, almost certainly one of the hundreds of victims of the Russian invading forces.

Since Zamoisky’s last social media post, regarding the invasion, was on 4 March, he may have fallen victim to the invaders well over a month ago.  The National Union of Journalists cited Serhiy Melanchenko in reporting that Zamoisky’s body remains in the morgue, with a forensic examination having left no doubt as to the violent nature of his death.

Zamoisky was a freelance journalist, who covered the activities of the local authorities, with his reports published by Hromada Pryirpinnia and Information Portal.

Six other Ukrainian or foreign journalists have been killed since Russia began its invasion on 24 February: Ukrainian cameraman Yevhen Sakun; US documentary filmmaker Brent Renaud; Pierre Zakrzewski and a 24-year-old Ukrainian journalist Oleksandra Kuvshynova, who were both working for the US channel Fox News; a Russian independent journalist (working for Insider) Oksana Baulina and well-known photographer and documentalist Maks Levin.  All six were killed while carrying out their professional duties.

In Zamoisky’s case this is not clear if only because of the mounting evidence of indiscriminate killings and savagery by the Russian forces.   Mass graves are still being uncovered two weeks after the Russian army’s retreat from Kyiv oblast.   The bodies of well over 900 civilians have been found, including in mass graves, and with very many of them having been shot and killed at close range.  A large number of the bodies show signs of torture, and many have their hands tied behind their backs.  In at least one case, the Russians had tried to burn the naked bodies of four or five women whom they had repeatedly raped.

Russia has spent time and money on propaganda efforts, claiming that the images seen at Bucha and elsewhere in Kyiv oblast are ‘staged’ and that there were no civilian killings and other war crimes.  It is also heavily censoring all media and social media and prosecuting people merely for expressing opposition to Russia’s war against Ukraine, or for circulating photos from Mariupol, Bucha or other scenes of horror.  In contrast, Ukraine has invited international forensic experts to take part in investigations, and there have been numerous visits by international leaders who express outrage and revulsion at what they clearly believe to be international crimes against the civilian population.

There is also considerable evidence of the Russian soldiers having looted people’s homes and then either sent their ‘trophies’ back to Russia or tried to sell them in Belarus (see: Belarusians name Russian soldiers caught on camera sending goods plundered in Ukraine to Russia ).

The OSCE’s first report on the war, published on 13 April, also gives no credence to such Russian attempts at denial.  The OSCE has found, for example, “credible evidence suggesting that such violations, concerning even the most fundamental human rights (the right to life; prohibition of torture and other inhuman and degrading treatment and punishment) have been committed mostly in the areas under the effective control of Russia.”

In March, the first full month after Russia’s full-scale invasion, the Institute for Mass Information reported 155 crimes against the media and / or journalists which Russia committed in Ukraine.  These including the killing or wounding of journalists; threats, persecution and abduction of journalists; the destruction or seizure of television towers; blocking of access to Ukrainian broadcasting or media, etc.

As reported, two Kherson oblast journalists Oleh Baturin and Oleksandr Hunko were seized by the Russians, while a third journalist Kostiantyn Ryzhenko was forced into hiding after the Russians came looking for him.  Hunko was released after four days, Baturin after eight days of torture and threats against his family. The Russians also abducted two women journalists from the Zaporizhzhia oblast.  One was released fairly soon, however Iryna Dubchenko was seized on 26 March and taken to the Russian proxy ‘Donetsk people’s republic’ “for trial”.  She was finally released, probably in the reported exchange of prisoners on 10 April.