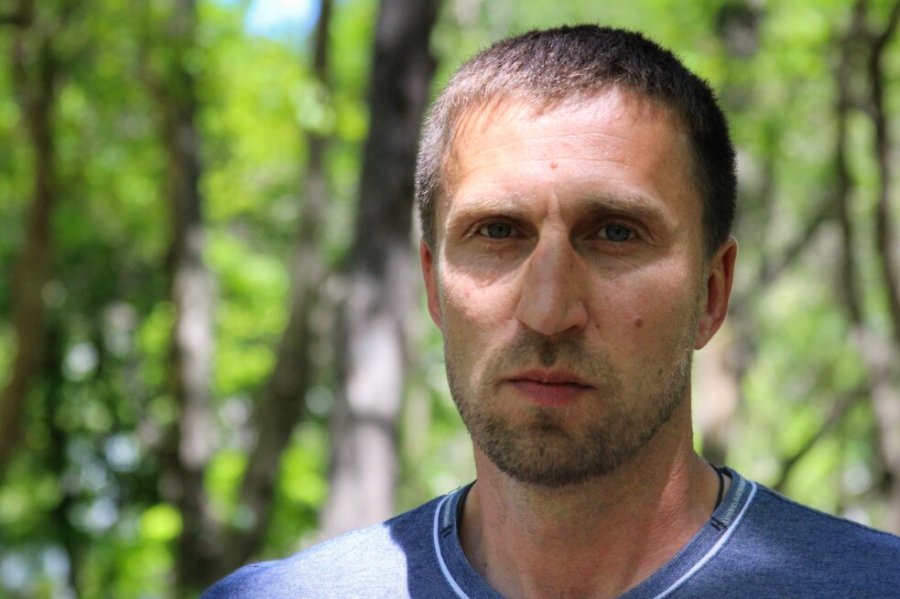 Rolan Osmanov was seized by masked men in plain clothes in the morning of 13 July, as he stood outside the ‘court’ in Russian-occupied Crimea where Crimean Tatar journalist and Mejlis leader Nariman Dzhelyal and two other political prisoners are on trial.  39-year-old Osmanov, a Crimean Tatar civic journalist and activist, was taken away, with nothing known of his whereabouts for some time..

It was only later learned that Osmanov had been detained by Ruslan Shambazov, the notorious head of Russia’s so-called ‘centre for countering extremism’ in occupied Crimea.  Shamazov has personally taken part in fabricating absurd charges against lawyers defending political prisoners; civic journalists and activists.

The pretext for Osmanov’s detention, and for the search by occupation police of his home, was a Facebook post which is claimed to ‘discredit the Russian armed forces’.  This is under Article 20.3.3 of Russia’s code of administrative offences, and is one of the arsenal of administrative and criminal charges brought into Russia law ten days after Russia’s full-scale invasion of Ukraine.  The administrative charges are used very widely in both occupied Crimea and Russia to punish for as little as a Ukrainian flag or the words ‘No to war!’.  In at least 68 cases, people have been imprisoned and face huge sentences under Article 207.3 (also supposedly ‘discrediting the army’ or ‘fakes’) for more actively criticizing the war or circulating truthful information and photos, for example, of the atrocities committed by the Russian army in Kyiv oblast.  One Russian, Alexei Gorinov, has already been sentenced to seven years for criticizing the war and talking about the children whom it has killed or orphaned.

Shamazov was recently involved in prosecuting well-known human rights lawyer Edem Semedlyaev on the same charge of having ‘discredited’ the army, with the pretext in his case something that Semedlyaev had merely been tagged on in Facebook and which he had immediately removed.  This was the second prosecution of Semedlyaev in six months, with Shamazov using the latter’s refusal to strip naked as excuse for getting him imprisoned for 12 days.  While Semedlyaev was ‘only’ fined on 26 May for the immediately deleted post that he had been tagged on, three other Crimean Tatar lawyers (Emine Avamileva, Aider Azamatov and Nazim Sheikhmambetov) were detained – Azamatov when he arrived to represent Semedlyaev, and the following day, Avamileva and Sheikhmambetov when they tried to represent Azamatov.  All three were jailed (Avamileva for five days, the men for eight) on absolutely absurd charges (of having contravened covid regulations by seeking to carry out their duty as lawyers).

It remains unclear which particular Facebook post is alleged to have ‘discredited the Russian armed forces’ in Osmanov’s case, with the ‘court hearing’ due on this charge on 14 July.  It is, however, clear from all of the events on 13 July, including the fact that Osmanov was seized while standing outside the political trial underway of Nariman Dzhelyal, that Osmanov’s administrative arrest was planned from the outset.  Shamazov claimed that Osmanov had refused to go with the (masked and unidentified) men to the ‘centre for countering resistance’, had videoed what was happening on his telephone and had shown resistance.   The latter was used to justify prosecution under Article 19.3 § 1 of Russia’s administrative code.  Shamazov even came up with two ‘witnesses’ who confirmed that the Centre officers “had acted legally” and that Osmanov had shown ‘resistance’.  Graty reports that these two supposed ‘witnesses’ were a guard for Russia’s Rosgvardia, Yury Borodin and a shop assistant, Maxim Kidenko, who appears (from social media photos) to have taken part first in Russia’s war against Georgia, and then in its invasion of Crimea and Donbas in 2014.  In fact, the ‘witnesses’ were probably only needed for the paperwork as Russian occupation ‘courts’ virtually never ask inconvenient questions and always provide the sentences demanded of them.  In this case, Osmanov was jailed by the occupation Zhelezhnodorozhny district court in Simferopol to three days’ administrative arrest.

Rolan Osmanov is one of the courageous Crimean Tatar civic journalists who attempt political trials and other forms of repression and stream information onto the Internet.  He has already faced one search in 2019, with the FSB then claiming, extremely implausibly, to be looking for drugs.  In late 2021, he was fined over the events on 4 September when he was detained while acting as a journalist  covering the events outside the FSB building.  On that day, over 50 men and women, including some quite elderly people, were detained, many very roughly, purely for gathering outside the FSB offices, trying to find out the whereabouts of Nariman Dzhelyal, Asan Akhtemov and his cousin, Aziz Akhtemov, and two other Crimean Tatars who had all disappeared after armed raids of their homes.

The reason why Russia’s ‘arrests’ are very often abductions, with men held incommunicado, is clearly demonstrated by all of the events around the revenge prosecution of Nariman Dzhelyal and the Akhtemov cousins.  See: