Russian show trial of Mariupol Azovstal defenders will likely be held on Ukraine’s Independence Day Russia invites Steven Seagal, while blocking the Red Cross from visiting Olenivka prison after killing of 53 Ukrainian prisoners of warRussian horrific castration of Ukrainian POW was about terror and preventing own soldiers from surrendering Horrific conditions and torture in Russian filtration camp ‘ghetto’ for Mariupol residents Hospital bombed by the Russians at Azovstal as more mass graves found near Mariupol Mass grave near Mariupol could contain up to nine thousand victims of the Russian invaders Russia plans total ‘filtration’ of Mariupol men and forced ‘mobilization’Russia destroys Mariupol and tries to get illegally deported residents to move to Siberia Russia accused of using mobile crematoria to hide its war crimes in Mariupol At least 50 Ukrainians were burned to death in Russia’s bombing of Mariupol hospitals Russian FSB produce ‘refugee’ propaganda video blaming Ukrainian soldiers for Russia"s war crimes in Mariupol Russia continues bombing Mariupol while producing propaganda videos about its ‘humanitarian aid’Russia responds to International Court order to stop bombing Ukraine by destroying Mariupol Theatre sheltering familiesRussian invaders take Mariupol intensive care hospital and its patients hostage Mass graves of the Ukrainian civilians Russia claims it is not killingTerror and abductions as Russia tries to break Ukrainian resistance in Kherson and other occupied citiesUkrainian journalist Oleh Baturin feared abducted by Russian invaders in Kherson oblast Mayor of Melitopol Ivan Fedorov abducted after refusing to collaborate with the Russian invaders Russian priest arrested and prosecuted for sermon opposing Russia’s war against Ukraine Russia effectively admits it deliberately bombed the maternity hospital in Mariupol that killed three patients, including a child
• Topics / War crimes 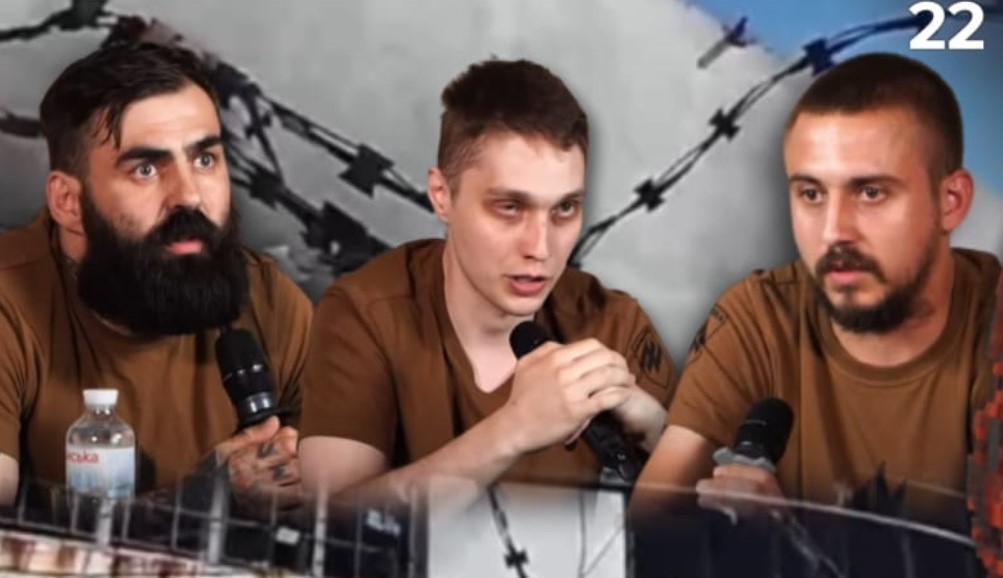 Long before the horrific explosion at Olenivka that killed 53 Ukrainian prisoners of war, Russia had used claims that the Ukrainian Armed Forces were bombing the prison as part of their psychological pressure on the POWs.  Russia is currently blocking independent investigators from examining the scene of what many believe was the deliberate killing of a huge number of the defenders of Mariupol who, as prisoners of war, should have been protected under international law.

Details of the methods Russia is using against Ukrainian prisoners of war, especially those from the Azov Regiment who played a key role in the defence of Mariupol, were given during a press conference on 22 August by three former POWs: Vladyslav Zhavoronok [nom de guerre ‘Wikipedia’]; Denys Chepurko [‘Mango’] and Dmytro Usychenko [‘Vyshnia’].  All three members of the Azov Regiment were seriously wounded and were eventually released as part of an exchange of prisoners.

Denys Chepurko spoke of how he had been ‘interrogated’ while held prisoner at the notorious Prison colony No. 120 at Olenivka.  This was, in fact, no questioning, but a banal attempt to force him into giving false testimony against his command and claim that it was the Ukrainian defenders who had bombed Mariupol.  The Russians used both beatings and threats of execution to try to force the men into signing such false documents saying either that they had bombed the city or that (as Dmytro Usychenko mentioned), they had killed civilians.

Russia began forcing Ukrainian civilians taken from Mariupol to Russia or occupied Donbas to produce videos or alleged ‘testimony’ claiming, against all internationally recognized facts, that it was Ukrainian soldiers who, for example, bombed the maternity hospital in Mariupol on 9 March or the Drama Theatre on 16 March.  They now appear to be also using prisoners of war, with such supposed ‘confessions’ presumably intended for the show ‘trial’ Russia is planning to stage in Mariupol.   As Vladyslav Zhavoronok said during the press conference, Russia is not looking for the truth.  It decides what it will call the truth and then adapts the facts to create ‘proof’.

Zhavoronok was gravely wounded and was moved from Azovstal on 16 May to a Russian-controlled hospital in occupied Donetsk.   He was still, in violation of international law, interrogated, with this an effective form of torture, since such ‘interrogation’ took place after the amputation of his leg, but before he had been given any antibiotics. It would be hard, he says, to call this medical care. He says that, in general, medication, or the lack of sufficient treatment, was used as a method of torture.  Even if the Russian or Russian-controlled militants lacked expertise or the means of treatment, they could have asked for them (from the International Committee of the Red Cross, for example), but instead left badly wounded soldiers without sufficient medication.  Zhavoronok says that in many cases real torture was applied – by poking around in a wound, for example.

The Russians also applied intense psychological pressure, constantly telling the POWs held in the Donetsk hospital that nobody needed them.  Zhavoronok says that he was told lies several times about supposed shelling by the Ukrainian Armed Forces of Prison No. 120 at Olenivka.  The men had no contact with their families, and no sources of independent information, and he is convinced that such false claims were aimed at persuading the POWs that they had been abandoned, and that the Ukrainian Armed Forces did not mind bombing their own soldiers.  Russia has been using identical tactics against Ukrainian political prisoners illegally held incommunicado since 2014.  Zhavoronok added that soon after he was released in an exchange, he learned that Russia was claiming that the Ukrainian Army had caused the horrific attack on Olenivka that killed 53 POWs and wounded up to 100 others. He is convinced that the attack was organized by the Russians to blame Ukraine.

The conditions were also appalling, with the POWs crowded into very small spaces.  Chepurko, for example, says he was one of ten prisoners held in a cell of one metre by one metre, with the men forced to sleep on the floor.  The water they received was scarcely drinkable and heavily rationed (around 600 ml in two days).

The treatment of prisoners of war is regulated by the Geneva Convention, but is, in the above-mentioned and more, being flagrantly violated by Russia.