Russia did not invade Crimea in new school textbooks edited by Putin adviser Crimean children taught that Russia didn’t invade Crimea and that Ukraine was an accidentChildren in occupied Crimea and Russia fed lies about the war in Donbas and anti-Ukrainian propagandaPreschool soldiers and children with rifles in occupied Crimea and RussiaRussia teaches Mariupol children to shoot and to hate Ukraine Conflicting values and conflicting narratives: the case of Russia’s war on UkraineSavage sentences in Russia’s religious persecution and plunder in occupied Crimea Invaders threaten to take children away if parents don’t send them to be indoctrinated ‘to love Russia’ Mock executions used to fabricate Russia"s revenge ‘trial’ of Crimean Tatar leader Nariman Dzhelyal “Do You Still Want This War?” Anti-War Activities in Russia, 3-9 July 2022Russia threatens deportation from Kherson & Zaporizhzhia oblasts for pro-Ukraine views and for ‘discrediting’ the invaders Russia removes last doctors after destroying Mariupol and causing humanitarian disaster Russia moves to eradicate Ukraine from schools in occupied Mariupol, Kherson and ZaporizhzhiaPatterns of Resistance are changing. A Digest of Protests in Russia (17-24 June 2022) “We’re not celebrating today” – digest of Russian protests (early June 2022)ECHR rules too late against Russia’s notorious ‘foreign agent’ law and hardly moves over violations in occupied Crimea Tortured body found of Ukrainian patriot seized by the Russian invaders of Kherson Young Crimean Tatar likely tortured into ‘confessing’ to anti-war protest Mariupol in danger of cholera outbreak, but Russian invaders concentrate on removing signs in Ukrainian Prohibited remembrance of Crimean Tatar genocide and mounting terror in Russian occupied Crimea
• Topics / War crimes 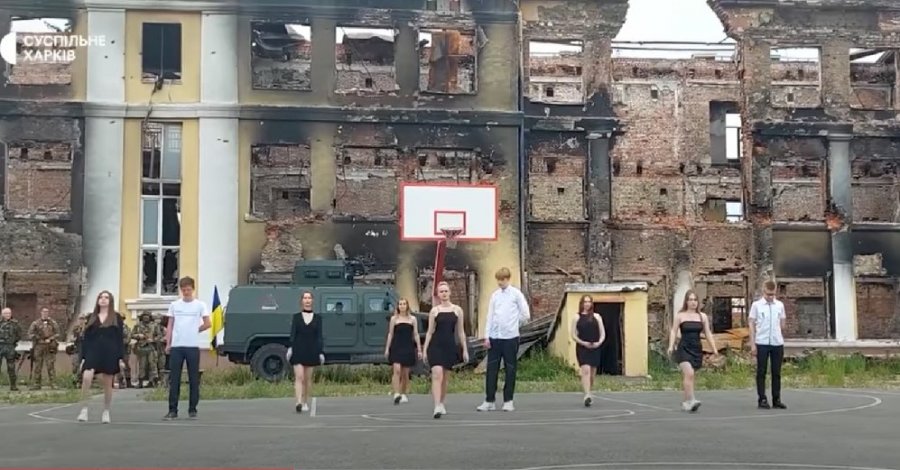 Kharkiv School No. 134 ’Graduation ball’ amid the ruins of the school following Russian bombing Suspilne video

Documents uncovered after the Ukrainian Armed Forces liberated Balakliya (Kharkiv oblast) show how the occupation regime swiftly took steps to remove the Ukrainian language and literature from schools. This is further confirmation that Russia’s war is not aimed, as Russian leader Vladimir Putin claimed, at “the demilitarization and denazification of Ukraine”.  As journalist Denis Kazansky points out, it is proof of Russia’s “policy of genocide”, its wish to eliminate all that represents Ukrainian identity.

Kazansky posted two documents from so-called ‘commissions’, made up of individuals willing to collaborate with the Russian invaders.  Both are entitled ‘On the removal of literature’, with one from 12 August, the other – 18 August.  Each indicates the number of textbooks from primary and secondary classes being removed, together with ‘Ukrainian symbols’; literature (works of fiction); posters, stands; signs (over the school, etc.) and school documentation. Kazansky believes that those named individuals who signed off this removal of Ukrainian literature and educational material, if they did not flee with the Russian forces, should face punishment of maximum severity.  They were not merely collaborating with the invaders, he stresses, but were complicit in actions that bear the hallmarks of ethnocide and genocide.

Russia began systematically eradicating the Ukrainian language and all elements of Ukrainian identity in occupied Crimea, and its proxy ‘Donetsk and Luhansk people’s republics’ from 2014.  In occupied Crimea, there are three official languages: Ukrainian, Crimean Tatar and Russian, however the first two are official in name alone.  Crimean Tatars who have faced particularly persecution under Russian occupation and who form the overwhelming majority of political prisoners have been removed from their own political ‘trials’ when they tried to address the court in their native language.  The Ukrainian language has all but been eliminated from schools, despite a UN’s International Court of Justice order in 2017 that Russia “ensure the availability in education of the Ukrainian language” in occupied Crimea. Russia opted instead for Soviet-style cosmetic ‘laws’ and doctored statistics.  In 2021, the Crimean Human Rights Group reported a catastrophic fall in the number of schoolchildren studying in Ukrainian.  The number of students was 36 times lower than in 2014, while the number of classes with teaching in Ukrainian had fallen by 31 times. A merely 0.09% of children were studying in Ukrainian.

Russia has hidden behind supposed ‘republics’ in Donbas and has therefore not bothered to conceal its policy of full russification.  By 2020, the Ukrainian language had been ‘officially’ removed from all schools in the so-called ‘Luhansk republic’, while the ‘Donetsk republic’ had removed Ukrainian as an official language.

With Russia’s full-scale invasion of Ukraine on 24 February 2022, Moscow dropped any pretence. By late March, Ukraine’s Military Intelligence was reporting that the Russian invaders were removing and destroying Ukrainian literature and history textbooks in newly seized parts of the Luhansk, Donetsk and Sumy oblasts.  After months of relentlessly bombing and shelling Mariupol, and causing a humanitarian crisis, the Russian invaders then proceeded to concentrate on changing road signs, etc. from the Ukrainian spelling of the city’s name to that in Russian.  It is small wonder that Ukrainians are demonstrating their resistance to Russia’s occupation of Kherson oblast and their plans for a pseudo-referendum by painting the Ukrainian letter ї on places seized by the occupiers and generally in public places.

Although Russia clearly hopes to eliminate Ukrainian language and identity, it does have another motive for removing textbooks.  The current regime in Russia is pushing a seriously distorted version of history and of current affairs in general.  Ukrainian textbooks of history, social studies, legal awareness, etc. must inevitably clash with this narrative which has, like in Soviet times, become the only permitted version of reality.  Petro Andriushchenko, Advisor to the Mayor of Mariupol, reported in May that the Russian invaders were destroying all textbooks on Ukrainian history and literature in Donetsk oblast, claiming this to be of ‘extremist content’.  ‘Inconvenient’ aspects of Ukrainian history would be muffled, and Vasyl Stus, the great Ukrainian poet and human rights defender who died in a Soviet political labour camp, is, under Russian occupation “once again an extremist”.