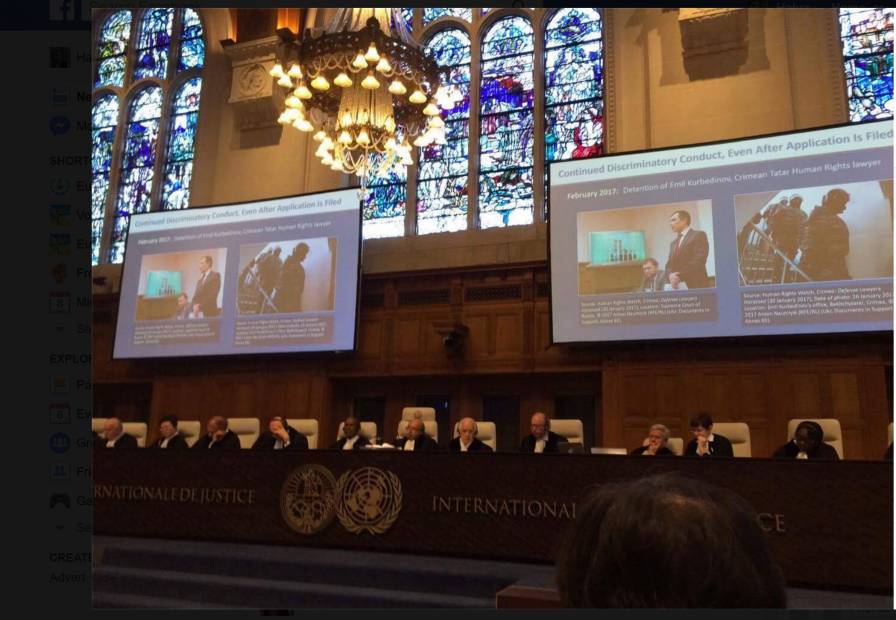 The International Court of Justice’s order  on April 19 concerning Ukraine’s suit against Russia may have rejected one request for provisional measures, but its intercession on behalf of Crimean Tatars and other Ukrainians facing persecution in occupied Crimea and its recognition of jurisdiction on both claims made this an important victory for Ukraine.  As one Ukrainian official put it, this was 3:1 in Ukraine’s favour.  Optimism is not high among victims of discrimination under Russian occupation regarding practical implementation of the provisional measures, but it is undoubtedly important that the Court recognized the repression and the urgent need for preventive measures now.

Russia had hoped to persuade the UN Court to throw the case out as being outside its jurisdiction.  Over both issues, however, the Court found prima facie jurisdiction.  The Court agreed to impose provisional measures over the banning in occupied Crimea of the Crimean Tatar Mejlis, or self-governing body, and restrictions on education in the Ukrainian language.  It rejected Ukraine’s request for provisional measures to stop Russia financing militants in Donbas, stating that Ukraine had not as yet provided sufficient proof. The Court instead stressed the importance of full implementation of the Minsk Accords. .

There has been no official response from Moscow, and the Russian state-controlled media are saying as little as possible.  Although Russian President Vladimir Putin’s press secretary stated during the preliminary hearings that Russia would abide by the Court’s rulings, this remains to be seen.  Crimean Tatar leader Mustafa Dzhemiliev has no illusions as to the likelihood that Russia will obey the ICJ’s order to remove its ban on the Mejlis and to ensure education in Ukrainian.  He does, however, stress the enormous moral significance of the Court’s acceptance of prima facie evidence of discrimination in Russian-occupied Crimea and decision to impose provisional measures.  This provides vital moral support for Crimean Tatars facing persecution, he says.

The First Deputy of the Mejlis in Crimea, Nariman Dzhelyal is also not particularly hopeful about the chances for the Court’s Order putting an end to persecution.   Even if Russia does obey the ruling and reinstates the Mejlis, state authorities will try to seize it and install people willing to do what they’re told. There has already been an attempt to make Remzi Ilyasov, a Crimean Tatar who is loyal to the Kremlin, Head of the Mejlis. It was after he was refused back in 2015, Dzhelyal says, that the persecution began.  The FSB has “a broad range of possibilities” for repressive measures, he says, from criminal proceedings to being prevented from entering Crimea.

Leonid Kuzmin, Head of the Ukrainian Cultural Centre is also sceptical.  The occupation regime is likely to come up with their typical excuse, that parents don’t want their children to study in Ukrainian, while pulling out the one Simferopol lyceum and other institutions for show to pretend that there is no problem.

Ukraine initially lodged its suit against Russia in January, with preliminary hearings held from March 6-9.  In order to fall within the Court’s jurisdiction, Ukraine needed to find violations of UN conventions binding on both countries.  In a 45-page document, Ukraine accused Russia of violating the International Convention for the Suppression of the Financing of Terrorism and the International Convention on the Elimination of All Forms of Racial Discrimination.

The first hurdle, as mentioned, was jurisdiction, and it was clear from the outset that Russia was hoping to persuade the Court, as it had in 2011 over the war between Georgia and Russia.  that it could not examine the case at all.   For the moment, it has failed in this.

Discrimination of minorities in Russian-occupied Crimea

This had seemed the stronger of the two claims since virtually every international body and human rights organization has acknowledged the grave violations of human rights since Russia’s annexation. It is no accident that human rights activists played a considerable part in compiling evidence for the court.

As reported, the Russian team at the Hague adopted a policy of denial and invention of ‘alternative facts’ about the situation in Crimea.  The lies were particularly scurrilous about the Crimean Tatar Mejlis, which is internationally recognized as the representative body of the main indigenous people of Crimea.  Russia falsely claimed ‘violent activities’ to try to justify its ban on the Mejlis and persecution of its leaders.

The Court was unconvinced.  By a majority of 13 votes to 3, it ordered Russia to “refrain from maintaining or imposing limitations on the ability of the Crimean Tatar community to conserve its representative institutions, including the Mejlis”.  The order to “ensure the availability of education in the Ukrainian language” was passed unanimously.

There were several reasons why Dmytro Kuleba, Ukraine’s Representative at the Council of Europe, was not alone in fearing that the Court would say it had no jurisdiction over the claim that Russia is financing terrorism through its arming, manning and funding of the militants in Donbas.  Kuleba had suspected that the Court might not want to open a Pandora’s Box.  In addition, while Russia’s claim that the weapons in Donbas had been ‘found’ in mines was manifestly absurd, proving the direct financing of the armed fighters and provision of weapons is more difficult.  There is also the issue of the definition of terrorism and financing of terrorism in the relevant Convention.  Ukraine needed to provide sufficient evidence of intention and knowledge, as well as the element of purpose (to kill or terrorize civilians).

The Court found that it had not yet done so, and refused to impose provisional measures, but did not reject the claim itself.

It is interesting here to read the separate opinion of ad hoc Judge Pocar.  He voted with the majority for provisional measures concerning the International Convention on the Elimination of All Forms of Racial Discrimination (CERD).

He supported, however, the imposition of “at least some of the provisional measures requested by Ukraine with respect to the International Convention for the Suppression of the Financing of Terrorism (ICSFT). In his view, it is plausible that the indiscriminate attacks alleged by Ukraine are intended to spread terror, and that the persons providing funds to those who conducted these attacks had knowledge that such funds were to be used for that purpose”.

He made another important point regarding why the shooting-down of Malaysian airliner MH17 was not examined in detail by the Court. “To avoid any misunderstanding, he considers that the Court could have made clear that it needs not, at this stage of the proceedings and due to lack of urgency — the airspace over eastern Ukraine being closed since July 2014 — examine the applicability of letter (a), and hence of the Montreal Convention, to the shooting-down of flight MH17.”

MH17 certainly formed part of Ukraine’s argumentation.  It has, after all, been established by the international investigation that the airliner was shot down over militant-held territory with a Russian Buk surface-to-air missile launcher which was then hurriedly taken back into Russia.

The arguments given by Samuel Worthsworth, a British lawyer representing Russia were noteworthy for the fact that Wordsworth avoided denying that the Buk had come from Russia.  He focused on the lack of evidence of intention to shoot down civilian aircraft.

If Judge Pocar is correct, then the Court has not necessarily accepted that Russia’s use of or provision to militants of highly sophisticated equipment that could down airliners flying overhead does not fall under the Convention.

Court hearings on the merits of this case could continue for a few years.  They will be taking place which is already something of a victory.  If Russia continues its ban on the Mejlis and persecution of its members, it will be in direct breach of the UN International Court of Justice whose jurisdiction it recognizes.