Russian invaders abduct Ukrainians in large numbers for grotesque ‘international terrorism trials’ Russian FSB attaches electric currents to genitals to force abducted Ukrainian to sign multiple ‘confessions’Russian invaders plan ‘trial’ of abducted Ukrainian volunteer on charge of ‘international terrorism’ Russian FSB uses total isolation to torture and try to break abducted Kherson woman Russia moves to legislate ‘impunity’ for all war crimes committed in occupied Ukraine ‘I believe the war will end soon, and everything will be fine’Russians threatened to kill abducted Crimean Tatar’s family if he didn’t sign fake ‘confession’ Four Russian invaders sentenced to 11 years for torturing hostages in Kharkiv oblast Brutal torment of young Mariupol woman imprisoned at Olenivka ‘concentration camp’ and in Russia Russian invaders abduct Melitopol lecturer in new wave of terror 90% of teachers in occupied Melitopol refuse to collaborate with Russian invaders Russians imprisoned 14-year-old boy and girls in Kherson and Mykolaiv oblasts Russia destroys the centre of Mariupol to conceal its war crimes while leaving residents to die of the cold‘At the plant in Volchansk, the Russians tortured even the priest with an electric shock’Evangelical deacon and his son found murdered near Nova Kakhovka after being abducted by the Russians Ukrainian poet and writer Volodymyr Vakulenko killed after being seized by Russian invaders Russian torture was particularly savage in Kherson oblast, with even teenagers imprisoned Russia left a trail of mined kindergartens and torture chambers in Kharkiv oblast ‘Яма’ і ‘пекло на землі’: у Херсоні виявляють російські катівні63 bodies of Ukrainians tortured by Russians already found in liberated Kherson oblast
• Topics / War crimes 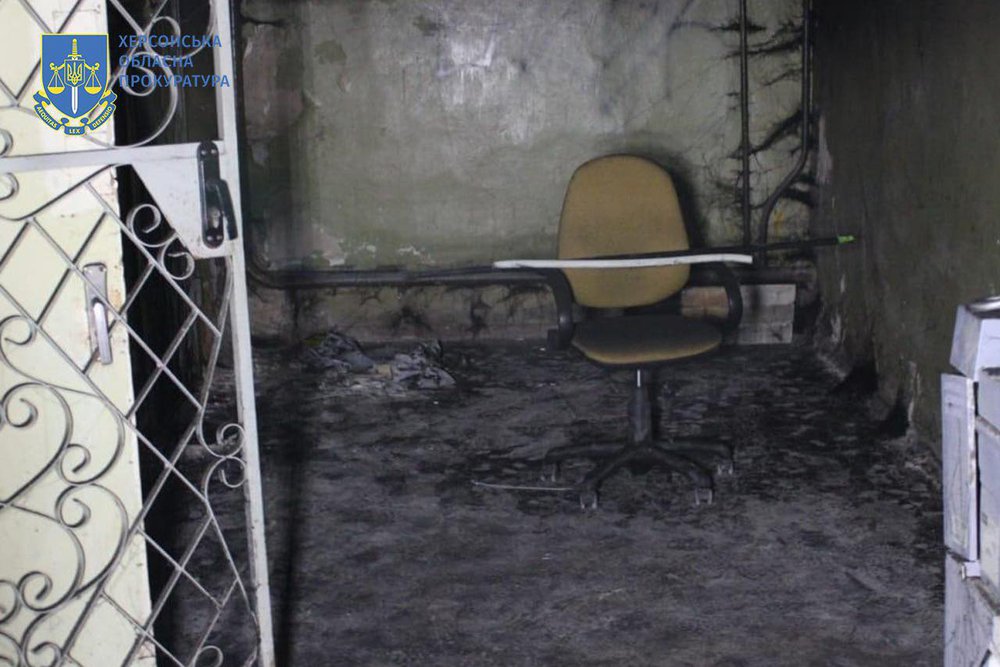 According to the Kherson Regional Prosecutor’s Office, as of 2 January 2023, at least 474 civilians were still held in Russian captivity, with the overall number of people abducted standing at over 1100.  Judging by the cases where the person was finally released, or where they have been able to communicate with lawyers, it seems likely that a very large percentage have been tortured, with some known to have been tortured to death.  Those held hostage by the invaders have included children as young as 14, with Ukraine’s Human Rights Ombudsperson reporting that some were tortured.

The Russians have begun immediately abducting civilians in any part of Ukraine that they seized, with gruesome discoveries of bodies showing clear signs of torture and of basements used as torture chambers whenever they are forced to retreat.  While some of their victims in Kherson oblast may have been seized for their known opposition and / or resistance to the invasion, in other cases there seems no clear reason.

14-year-old Vitalik (Vitaliy) Mukharsky was held hostage for ten days.  He was cold and hungry and must have been terrified both for himself and for his uncle who was seized at the same time, but held separately.  The Russians threatened to take the young lad to Russia ‘for trial’.

On 14 November, Ukraine’s Human Rights Ombudsperson Dmytro Liubinets reported that in one of the ten premises thus far found, where the Russians held and tortured civilians,, a room had been discovered that was used for holding children.  He said that the Russians themselves called it ‘the children’s room’.  The children were given water only every second day and received virtually nothing to eat.  Brutal psychological pressure was applied, with the children, for example, told that their parents had rejected them.

Torture for ‘confessions’ or simply for ‘pleasure

Viktor Maruniak, the village Head of Stara Zubrivka in Kherson oblast was abducted by the Russian invaders on 21 March, his 60th birthday.  He was held and tortured for three weeks, with the torture something that he later told Suspilne his captors appeared to derive ‘pleasure’ from.

The Russians are still holding many other public officials, who were almost certainly seized because they refused to collaborate with the occupiers.  It is unclear, even, where the Mayor of Kherson Ivan Kolykhaev, abducted on 28 June, is even held.  In the case of Oleksandr Babych, Mayor of Hola Prystan, he is believed to be imprisoned in occupied Crimea, however there is no information as to what illegal charges, if any, the Russians have brought against him.

Abducted and tortured to death / killed

In the middle of November 2022, Ukraine’s Interior Minister Denys Monastyrsky reported that 63 bodies had been uncovered in Kherson oblast, with these sent for exhumation.  That number is rising all the time, as new graves are found.

Denis Myronov and Vitaliy Lapchuk were probably tortured to death for trying to defend Kherson against the Russian invaders, and they were almost certainly not the only such victims.  It is less clear why the Russians abducted and then killed Anatoliy Prokopchuk, an evangelical deacon from Nova Kakhovka, and his son, Oleksandr, unless this too was ‘for pleasure’.

The human rights group Crimea SOS is also monitoring the situation and is aware of at least 575 victims of enforced disappearances.  They report that around 60 residents of the Kherson oblast are currently imprisoned in occupied Crimea.

It is surely no coincidence that, just like in occupied Crimea, Crimean Tatars living in Kherson oblast seem to have been particularly targeted.  At least eight men have been abducted, either from their homes in Kherson oblast, or from the administrative border with Crimea, and illegally handed over to Russia’s FSB.  The latter have then staged fast-track ‘trials’ on charges of involvement, while in mainland Ukraine, in the Noman Çelebicihan Battalion, a perfectly legal formation which, despite its name, was never armed.  The Battalion has long since ceased to exist, however Russia is using it as a pretext for new conveyor belt kangaroo court ‘trials’ and sentences of up to 10 or 15 years.

Several of the men seized in this way have described the torture used to try to extract ‘confessions’.  25-year-old Rustem Osmanov was seized from his home in Kherson oblast, subjected to beatings, asphyxiation, torture through electric currents being passed through his body, and told that his family would be killed if he did not admit to the insane charges.

Oleksiy Kiselyov, former commander of the Ukrainian Navy’s Slavutych Command Ship, is facing a combination of these charges, fabricated after the Russian invaders abducted him from his home in occupied Henichesk (Kherson oblast). The torture the 58-year-old Ukrainian endured from his captors originally is now being compounded by the failure of the occupation SIZO [remand prison] authorities in occupied Simferopol to provide medical care for injuries, including broken ribs.

Russia is also illegally holding Iryna Horobtsova, a 37-year-old Kherson resident, at SIZO No. 2 in occupied Crimea.  Her lawyer Emil Kurbedinov suspects that the Russian FSB are concealing even the fact that he is trying to see her, and are trying to break her through brutal isolation.  She too is not believed to have been charged with any supposed offence even though it is almost eight months since she was seized from her home in Kherson.

It has been learned that the FSB are now planning to charge Ukrainian writer, journalist and civic activist Serhiy Tsyhipa with ‘spying’.  This deranged change is being laid by the Russian invaders of Ukraine against a Ukrainian abducted from Nova Kakhovka, held hostage and then taken illegally to occupied Crimea.  It is near certain that the video which the Russians showed of Tsyhipa was obtained through torture.

Russia’s FSB in occupied Crimea are also known to be fabricating truly cynical charges of ‘international terrorism’ against a number of Ukrainian civilians abducted from the Kherson and Zaporizhzhia oblasts.   They include 32-year-old Yaroslav Zhuk from Melitopol (Zaporizhzhia oblast) and Pavlo Zaporozhets (also 32), a veteran of the first military action against Russian aggression from Kherson.  Zhuk was seized by the Russians in June and held for some time in a Melitopol basement, before being taken to occupied Crimea and ‘officially detained’.  Zaporozhets was seized on 9 May and held prisoner for three months before any official acknowledgement of his detention in occupied Crimea. Russia appears to be charging him, under Article 361 of its criminal code, with so-called ‘international terrorism’.  Zhuk has described the torture he endured in detail, and Aleksei Ladin, the lawyer representing the two men has confirmed that both were subjected to torture, with this how the Russians extracted Zaporozhets’ supposed ‘confession to planning a terrorist attack’ and how they forced Zhuk to sign ‘multiple confessions’.