‘My brother and weakened mother were left in the middle of the street’ — stories from Izium‘In Sloviansk, we watched out of the window as people held up the train tracks with crowbars so we could pass through’ She was about to turn 53. A citizen of Trostianets speaks about his wife’s detention and murder‘Five people were killed there, including a pregnant woman’‘Grandfather was thrown a hundred meters away by the blast wave’‘There was nothing left of the neighbor, only shoes...’‘My husband and son were injured during an airstrike’‘I believe the war will end soon, and everything will be fine’She said goodbye to life when the airstrikes made the houses collapse like a house of cardsHis mother was shot, and the place of work was destroyed — Russian occupation harshly affected the life of Trostianets resident Serhii Pentin‘War on four paws’ — personal battle of Serhii Neboha‘For all the evil they have done, they will be held accountable before God!’
• Voices of war

We met with Halina Khoroshchak in her apartment in Borodyanka, which was destroyed by air strikes. With tears in her eyes, the woman spoke about how the Russians dropped bombs on residential buildings, shot civilians, and looted. We recorded the interview in the summer.

— What was the first day of the full-scale invasion like for you?

— On the first day, my daughter came running and said: “Mom, war!” Explosions were heard; the Russian beasts were coming, and they had already occupied Ivankov. Hundreds of tanks drove along the beltway. Then they started shooting, and we hid in the cellar.

On the night on 1 March, they dropped a bomb on the house next to us, the shock wave badly damaged our home, and now it needs to be demolished. In addition, it smashed the cars near the houses and garages. It was tough! We tried hard to do everything to feel like people and to let the children live. My grandson is three years old, and now he says to me: “Grandma, bang! Grandma, bang!” I tell him: “Zhenechka, my baby, there are no bangs!” He went to kindergarten, which was also destroyed. There is no more kindergarten.

There was a music school — it was destroyed. The first school was destroyed, but now it’s being repaired. The employment center and administration were wrecked; the village council, the ATB store, and the fire department were damaged; the notary's office was burned down with all documents. Also, the post office was destroyed. They dropped bombs on nine-story residential buildings. They did it on purpose.

On 2 March, I went into the apartment to see what was happening. At that moment, something terrible flew above me. They fired from a helicopter or an airplane. I fell to the ground, face down into the glass, and covered my head with my hands. Nearby lay a man covered with debris.

One guy and his grandmother from our building disappeared after the bombing. Further down the street, a bomb was also dropped on a five-story building. These are barbarians! Are they people? They are worse than Genghis Khan, worse than the fascists.

— How many people were injured/killed in your and neighboring houses?

— In our house, all thirty apartments were damaged. The man, Artem, from the 29th apartment, has not yet been found. Everyone else seems alive because they were not in the house at the time of the explosion. We were hiding in basements. However, the mother and son, who recently bought an apartment in a neighboring building, died. The son was found without a head, but the mother was not found. A family from another house disappeared as well.

There were three girls, the eldest was sixteen, and the youngest went to kindergarten. Nobody knows where they are. Some say they climbed out of hiding a few minutes before the explosion and went into their apartment.

— Has your attitude towards Russians changed a lot?

— I hate them! I would shoot them! If they gave me a machine gun… Why did Russians come to us?! Why did they do this to my apartment?! So that my children are now left without a home ...? For what?! I have a Russian neighbor who lives here; his wife is Ukrainian. He said no one has ever offended him here and has not forbidden him to speak Russian. He has relatives in Russia, and I asked: “Why are they silent? Why don't they protest?”  And he said they couldn’t because they would be arrested.

— What property of yours was damaged? 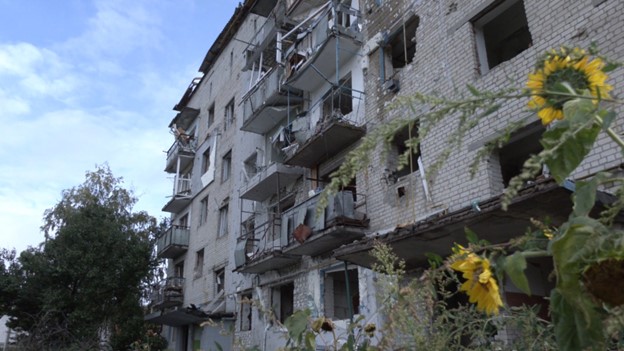 Photo: House in Borodianka, damaged by an airstrike

— What happened in Borodyanka during the occupation?

The Russians shot people, and the graves were found. There was also so many dead in the nine-story buildings. People were in the basements, and the Russians did not allow them to be rescued. People screamed and begged for help, but none was saved. We managed to get the corpses out of the basements only after the liberation. So many people are missing today, but it is not known where they are, and the bodies have not yet been identified.

My in-law was almost shot; he was under occupation here. He helped his neighbors save dogs and pigs, and did not allow the Russians to steal pigs, so their drunken commander came out and ordered them to shoot. However, the soldier refused. He was a Buryat.

They lived in our houses and apartments. They fouled places where they lived. They went into the cellar where my acquaintances hid and shot everyone there. Are they people?

— Does the state help you?

— When we were in the evacuation, we received Internally Displaced Persons (IDPs) assistance, but nothing else. So now we registered with Red Cross.

— What do you plan to do next?

— Well, I don't know what we're going to do. We hope there will be some kind of philanthropist, or maybe this house will be dismantled, and a new one will be built in its place. Everyone wants to live here; my children grew up here, and my grandchildren ... 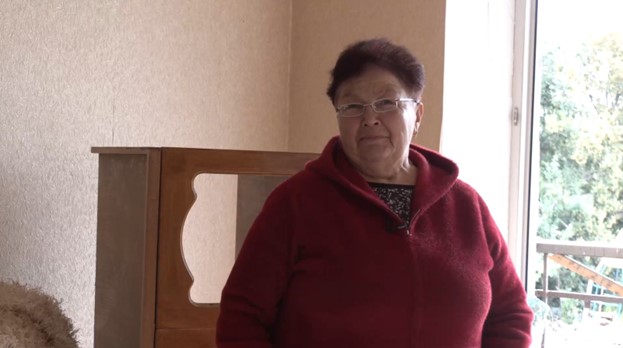 Halina Khoroshchak, Borodianka
The article was prepared by the Kharkiv Human Rights Protection Group with the support of the Prague Civil Society Centre
Share this
x