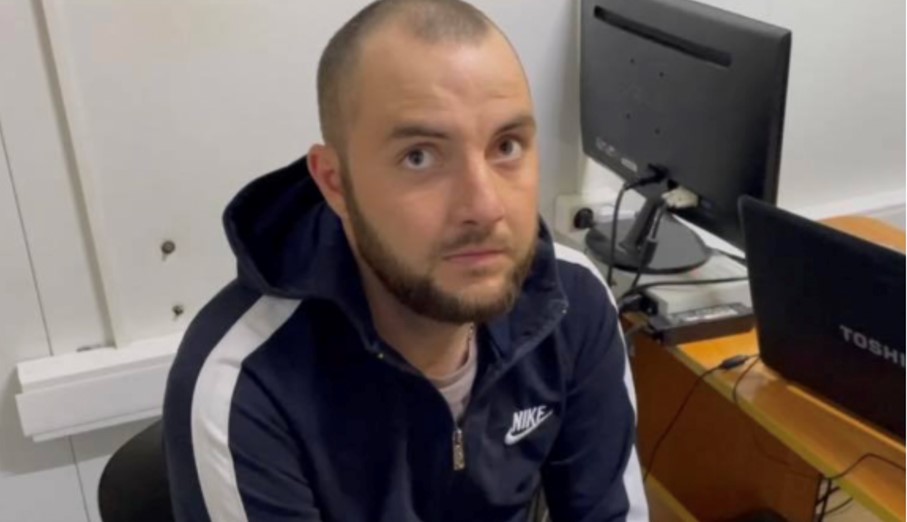 Rustem Osmanov Photo posted by the Crimean Human Rights Group
Rustem Osmanov was abducted by the Russian invaders from his home in Kherson oblast in April this year and illegally taken to occupied Crimea where a kangaroo ‘court’ sentenced him to six years on absurd charges.  The 25-year-old has now provided an account of the torture that he was subjected to, and of the threats his captors made to kill his family.

In a letter made public by the Crimean Human Rights Group, Osmanov explains that 12 men in Russian military uniform and brandishing machine guns burst into his home in Kalanchak (Kherson oblast) on 15 April 2022.  They hit him and forced him to the ground.  After putting a bag over his head, and handcuffing him, they forced him into a freight vehicle where they continued to beat him.  They then took him to the administrative border with occupied Crimea.  It was there, in a carriage, that the Russians threatened him and tried to force him into giving false testimony.  He refused, but they then threatened to kill not only him, but members of his family, if he didn’t write what they told him.

“I was beaten there, and they used electric currents, taking advantage of my helplessness. On threat of death, they forced me to sign the testimony they needed, after which they sent me to the special bloc in SIZO [remand prison] No. 1.  Through fear that they would kill my family and myself, I was forced to concealed truthful information. Please take measures to help return me to my homeland, to Ukraine and also provide assistance to my relatives.”

Rustem Osmanov is one of many Crimean Tatars and other Ukrainians abducted from mainland Ukraine, in particular the Kherson oblast, and then taken to occupied Crimea.  In essentially all cases where a person has been able to contact human rights defenders and / or an independent lawyer, they have spoken of the horrific torture they suffered.  The FSB use ‘confessions’ tortured out of their victims and often videoed for propaganda purposes, and to enable fast-track sentences in these political ‘trials’.

In April, the FSB reported that Osmanov had been ‘arrested’, but claimed, falsely, that this had been as he tried to enter occupied Crimea.  They asserted that Osmanov had “in 2016, while on Ukrainian territory, voluntarily joined the [Noman Çelebicihan] Battalion where he provided food, other items, for the Battalion’s activities, and also took part in its militarized defence.”

There was no ‘militarized defence’, whatever this means, only the peaceful Noman Çelebicihan Battalion which, despite its name, was not an armed formation, and is legal in Ukraine.  The Battalion was founded by Crimean Tatar activist and businessman Lenur Islyamov on 1 January 2016, with the first members people who had taken part in the civic blockade of occupied Crimea.  This blockade was initiated by Crimean Tatar leaders Mustafa Dzhemilev and Refat Chubarov, together with Islyamov, on 20 September 2015.  The blockade demanded an end to all trade, and supplies of electricity to Crimea while it remained under Russian occupation.  There were initially very specific human rights demands, including an end to the political repression and restrictions on the media which Russia had brought to Crimea, and much more. Such a total blockade should have been imposed back in April 2014 when Ukraine rightly stopped providing water to occupied Crimea.

While the Battalion and its members undoubtedly saw their ultimate objective as the end to Russia’s illegal occupation of Crimea, its members simply promoted the goods and energy blockade and provided backup for Ukrainian border guards in areas near the administrative border with occupied Crimea. The Battalion has not really existed for such time, but this is not stopping Russia from using charges of involvement in it to fabricate politically motivated ‘trials’, including against people abducted from mainland Ukraine.

Rustem Osmanov was charged, as have been others since early 2018, under Article 208 § 2 of Russia’s criminal code with “taking part in the activities of an illegal armed formation, acting on the territory of a foreign state for purposes which are against the interests of the Russian Federation”.   Although claims are generally made that those arrested were trained in using weapons, these are only ever backed by anonymous ‘witnesses’ who may well have never known the person on trial.

In June this year, Russia’s Supreme Court declared the Noman Çelebicihan Battalion  to be a ‘terrorist’ organization and banned it on the territory of Russia or occupied Crimea.  Although the number of men arrested since the beginning of Russia’s full-scale invention has risen dramatically, it is telling that neither the charge, nor the sentences have risen significantly. That could, however, change at any time, with Russia using an equally flawed Supreme Court ruling about Hizb ut-Tahrir to sentence civic journalists and activists to up to 20 years without any crime.  At present, the ‘terrorism’ label which did, in fact, post-date the actual existence and activities of the Battalion, is largely used for propaganda purposes by the Russian state media.

Osmanov was thus illegally abducted from mainland Ukraine and charged with ‘involvement’ in a formation which is legal in Ukraine.  Despite such flagrant illegality, the occupation ‘Bilohirsk district court’ sentenced him on 19 August 2022 to six years’ imprisonment.  The ‘prosecutor’ in this shameful case was Petro Popov, the ‘judge’ – Igor Sokolovksy.

The Crimean Human Rights Group understands that Rustem Osmanov has been taken to a Russian prison colony in Ulyanovsk.