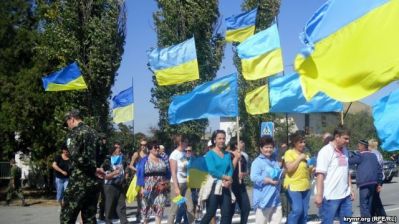 At midday on Sunday, Sept 20 Crimean Tatars and various Ukrainian civic organizations, including Right Sector, began an indefinite blockade of the ‘border’ between mainland Ukraine and Crimea.   All three crossings into Crimea (Chonhar, Chaplinka and Kalanchak) were blocked to trucks, though cars and individuals on foot were allowed through.  Mustafa Dzhemiliev, Crimean Tatar leader and the President’s Representative on Crimean Tatar Affairs, was present and stressed that the situation is unheard of where a country whose territory has been occupied by an aggressor state continues to provide the occupied territory with food, electricity, etc., There is no excuse for trade, he says, which enables both the occupation regime and Ukrainian oligarchs to act as though nothing had happened.  .

Various reports focused attention on the involvement of members of the far-right movement Right Sector.  According to well-known journalist Ayder Muzdabayev, there were activists from Automaidan, Maidan Self-Defence and other Ukrainian civic organizations present, with many having come from different parts of Ukraine.  Journalists from Novoye Vremya visited all three areas which are blocked and say that, although Crimean Tatars initiated the blockade, they are in the minority, with many members of volunteer battalions also taking part. .

There were at least four Ukrainian MPs present - two of the initiators - Mustafa Dzhemiliev and Refat Chubarov, Head of the Mejlis or Crimean Tatar representative assembly, Ihor Lutsenko and Volodymyr Parasyuk

An important detail is the role of the police.  Ilya Kiva, Deputy Head of the Kherson Regional Police was present throughout the day.  He explained that more than 100 police officers are deployed. “We’re ready for everything, including for provocation and direct offensive by the enemy. Therefore the Interior Ministry Battalion ‘Kherson’ is fully ready for action, has moved to its posts and is currently setting up base so that it will be able to react to any situation”.   It is he and his men who can be seen going up to a driver in the video here, explaining that he is in charge of law and order, and that all actions must be coordinated with the organizing committee.

It was probably Kiva and his subordinates who prompted the report from Oliver Carroll that Right Sector paramilitaries were present.  Certainly Kiva himself is quite adamant that only the Kherson Battalion have the right to bear weapons..

It should be stressed that Mustafa Dzhemiliev has always championed strictly non-violent resistance.

No to business as usual

Muzhdabayev writes that “Judging by the number of trucks with commercial loads on the roads into Crimea today (and this when the blockade had been announced in advance, and many didn’t set out), there is no annexation.  There’s mutually advantageous collaboration.

The claims by Aksyonov and Konstantinov [Russian-occupied Crimea’s de facto leaders] that Crimea is in no way connected with Ukraine are, to put it mildly, exaggerated. You could feed the entire peninsula with so many trucks. “

Chubarov told journalists that there need to be food markets on the Ukrainian side of the administrative border with Crimea so that Crimeans can buy goods at reasonable prices.  He calls on Ukrainian businessmen to “not feed the bandits in Crimea via illicit arrangements.”

According to Chubarov, over the first 5 months of this year, the turnover in goods passing between Crimea and mainland Ukraine came to 475 million USD. And that, he says, is only the part that they can see.  “Money is thus passing hands between oligarchs here and Aksyonov and his bandits there which is used to pay for the searches and offensives against Crimean Tatars’ homes ».

No trade without rights

As reported, very specific demands have been presented.

2       Remove all restrictions on Crimean Tatar and Ukrainian media in Crimea ;

4       Stop all unwarranted administrative and criminal prosecutions of Crimean Tatars and other Ukrainian nationals in Crimea ;

5       Remove the ban from their homeland on Refat Chubarov; Mustafa Dzhemiliev ; Sinaver Kadyrov and Ismet Yuksel;

The demands, as can be seen, are hardly illegitimate and the blockade organizers insist that they will not leave until they are met.

There was predictable criticism, as well as defamatory remarks, from the occupation regime’s de facto leaders.

There was also however concern about the presence of Right Sector.  Even if there were many other groups present, it was Right Sector Press Secretary Artyom Skoropadsky who addressed the activists, together with Chubarov and the owner of the Crimean Tatar TV channel ATR, Lenur Islyamov.

In an opinion piece on the Radio Svoboda Crimean Service entitled ‘Crimea. Blockade of Despair’, Ivan Serhiyenko subjects the blockade to strong criticism.  From the human point of view, he says, you can understand the position of Crimean Tatar leaders who have had the right to their homeland, which they fought for most of their life, taken away from them.  He points out that the Ukrainian government didn’t even try to defend them in Spring 2014, and is still not trying to change the situation 18 months later.

“However, if we put one simple question: will such measures help to improve the human rights situation in Crimea, then the answer is no. More, the position of Crimean Tatars could even worsen. »

The blockade will not cause any major economic damage, and from a legal point of view the obstruction is unlawful.  He argues that they must not behave like Russia where political expediency always takes precedence over the letter of the law.  Crimea will not be returned to Ukraine through such measures, but only through returning to the realm of law.

He also argues that the human rights situation will categorically not improve.  On the contrary, Russia will only increase repressive measures, while support for the Mejlis from the point of view of ordinary Crimean Tatars will fall.

Such measures, he asserts, could have worked in early 2014, but are useless now.  He says that most goods now come from Russia and the main advantage of Ukrainian goods is that they are cheaper.  Rising prices will also increase resentment against the Mejllis.

If the blockade were part of a Ukrainian strategy, that would be different, however there is no such strategy nor any sign that there will be, and for him, therefore, the Crimean Tatar blockade is « a cry of despair » which is doomed to failure.

He may, or may not, be right.  The occupation regime is reacting in an aggressive manner which suggests that they are worried by the blockade.

The other factor which Serhiyenko does not focus on is the possible pressure on Ukraine’s government which has all too long confined itself to verbal support for Crimean Tatars and other Ukrainians in Crimea.  Ukraine’s legislators even produced the Law on making Crimea a free economic zone which was slammed by civic and human rights groups as effectively recognizing the Crimea as Russian territory and allowing Ukrainian oligarchs and enterprises to continue trading as though nothing had happened.  The blockade is, in this respect, belated, but does highlight all that Kyiv could and should be doing.