‘I fell face down into the glass and covered my head with my hands’‘My brother and weakened mother were left in the middle of the street’ — stories from Izium‘In Sloviansk, we watched out of the window as people held up the train tracks with crowbars so we could pass through’ She was about to turn 53. A citizen of Trostianets speaks about his wife’s detention and murder‘Five people were killed there, including a pregnant woman’‘Grandfather was thrown a hundred meters away by the blast wave’‘There was nothing left of the neighbor, only shoes...’‘I believe the war will end soon, and everything will be fine’She said goodbye to life when the airstrikes made the houses collapse like a house of cardsHis mother was shot, and the place of work was destroyed — Russian occupation harshly affected the life of Trostianets resident Serhii Pentin‘War on four paws’ — personal battle of Serhii Neboha‘For all the evil they have done, they will be held accountable before God!’
• Voices of war

‘My husband and son were injured during an airstrike’ 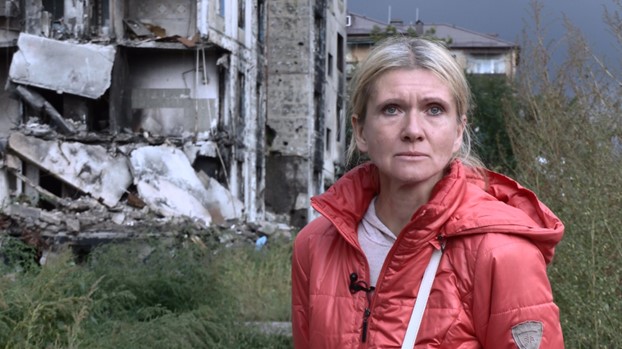 My name is Oliinyk Yryna Petrovna, I am 49 years old. I am a resident of the village of Borodianka in the Kyiv region. Before the war, I was on maternity leave, and now my child is two and a half years old.

— What was the first day of the full-scale invasion like for you?

— I didn't know right away. I did not turn on the TV because I was busy with my child, so I did not watch the news. Later, my mother told me the war had begun, but I didn't think it was full-scale. For some reason, there was no fear. On the third day of the war, when Russian tanks appeared in Borodianka, I also had no fear, although I saw them from my balcony. But then, I didn’t know the real worry about a child. The absolute horror began on 1 March.

— What happened on 1 March?

— The day before, Russian tanks were moving all night. We had nowhere to go. They rode and fired, deliberately fired at houses, aimed at the windows. I arranged with a friend who lives on the other side of Borodianka to shelter us. But we did not dare to leave the house under shelling. We were too frightened. I thought, perhaps there will be less shelling in the morning, and then we will go. But it wasn’t, and they continued bombardment. In the afternoon, on 1 March, when I was walking with my son, helicopters and planes were flying. Many houses near us have already been damaged. Our other friend offered to stay with him, but we refused.

In the evening, we went to the apartment and ate; I put my son, Ehor, to bed. At 6 pm, we went down to the basement. We waited for the tanks to pass, then we heard silence. No planes, no tanks. My mother went to cook food. Twenty or thirty minutes later, there was a powerful explosion, another explosion, and another. My son and husband were seriously injured. A man from Terroborna [Territorial Defence Force] came running and took us to the hospital. I remember that at 10 pm we were examined by a doctor.

— What kind of injuries did your husband and child sustain?

— My son had a traumatic brain injury, and I found him unconscious; on the way to the hospital, he constantly lost consciousness. He felt sick for the next three months while we were in the evacuation. The sight of food disgusted him. However, when we returned to Borodianka, his appetite returned. My husband had four broken ribs and punctured lungs.

— How did your husband and son get injured?

— We had just left the basement and were at the entrance when the explosions started. Those who remained in the basement were not injured. We left because I thought that there would be no more shelling. If we went out the door, we would no longer be alive. Two or three steps more,  and that's it... I heard ten people died in the neighboring house. When I went out, I saw that half of the neighboring house was gone. I found out later that there were victims. 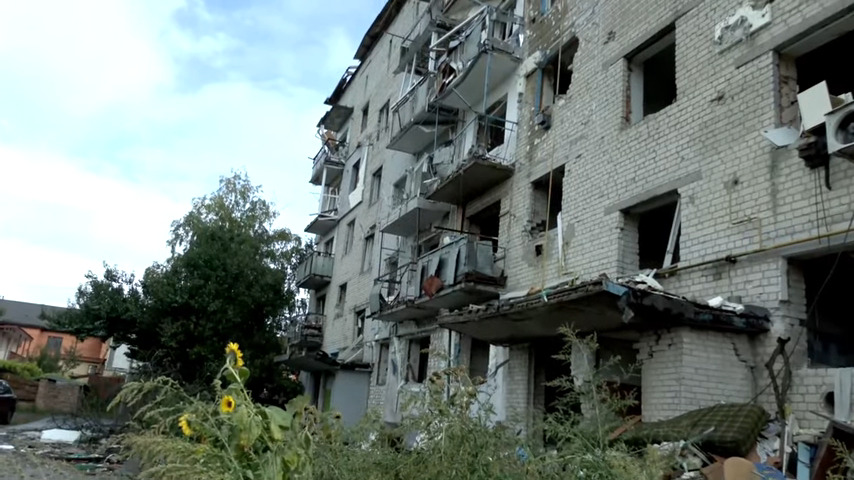 — How did you get to the hospital after your husband and son were injured?

— We walked through the back alleys. We were given medical care in a hospital and spent the night in the hospital basement. Then, on 2 March, the evacuation began, and we were almost the last to evacuate.

— How exactly did you evacuate?

— In the morning, we left the hospital basement, and there were buses on the street. We didn’t have anything with us, and we went in what we wore when we rushed to the hospital. The minibus driver said to get in quickly because there would be no evacuation in the evening. We were brought to the village of Zahaltsy in the Borodianka region. We were fed and clothed there because our son's clothes were torn to shreds. Then we were taken to the village of Pyskovka, which is in the Bucha district. We were there for two days and spent the night at school. Then we went to Horodnitsa, in the Zhytomyr region.

— How are your husband and child doing now?

— The husband feels pain in his chest when he takes a deep breath. I had to take my child to a neurologist. They said that it was necessary to observe him and that we needed to contact the doctors if there was nausea.

— Before 24 February, did you think that a war could begin?

— No! If I had foreseen it, I would have left immediately on the 24th. Some people anticipated that a war would break out. They evacuated on the first day. But, unfortunately, I didn't have that feeling.

— Why didn't you evacuate at the beginning of the Russian invasion?

— We were afraid. On the Internet, I read that the Russians shot cars. We didn't know where to go or where their troops were, and planes flew around. We were scared. I didn’t leave my house and was afraid to walk the streets of Borodianka.

— Do you know about the crimes committed against the civilian population by the Russian military?

— When we lived in Horodnitsa, I heard terrible crimes were committed in Borodianka. Russians raped girls, hanged them, and shot them. But when I returned home, no one talked about this.

— All furniture had been destroyed. Everything was broken. Only the washing machine in the bathroom survived, but we don't know if it works. So everything has to be bought from scratch. My husband and I used to go to Poland to earn money. We invested so much money in an apartment, all in vain ... 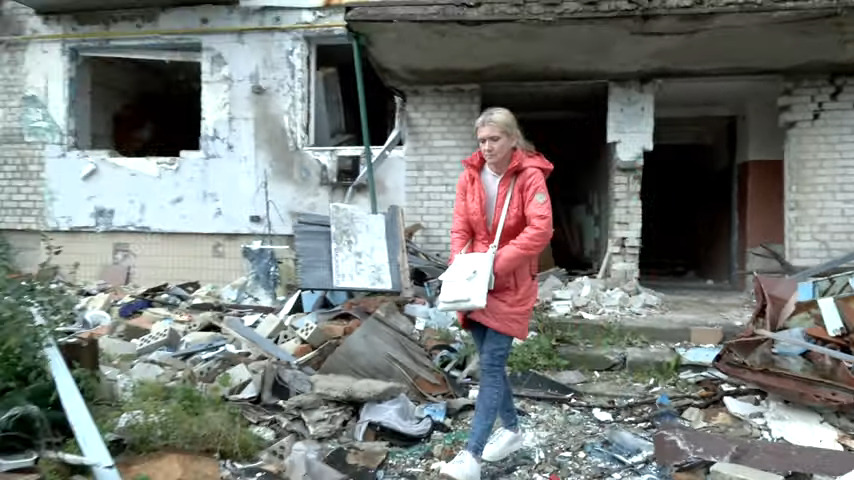 Borodianka resident Yryna Oliinyk on the threshold of a destroyed house

— Where do you live now?

— Now in Borodianka, in a modular house. The kitchen has hot water and some amenities: eight burners for 22 rooms. Our room is small, six meters, with bunk beds. There is not enough space for us and a child. It is very hard, and it doesn’t feel like home. When I drive past our house, I want to cry. I want to go home!

— Is the state helping you now?

— As for housing, we were told to enter a queue and wait. Perhaps there will be some apartments in new buildings in the Kyiv region. But I want to live here, in Borodianka, or at least the same distance from Kyiv. When the war ends, I want to leave Ukraine. At least for a while to earn a living. I don't want my child to grow up homeless. He is a late child and such a fate ...

— Yes! It became more negative. I have relatives in Russia. Now we don't talk to them. They don't even care how we are here, and they are close relatives. I don't even want to watch Russian films. I used to turn on their cartoons for my son, but now I don’t want to turn them on.

— What do you plan to do next?

— I do not know. I'm waiting for the victory!