Grave of more tortured victims of Russian invaders found in Kyiv oblast Raped, shot and thrown in a mass grave by the Russian invaders who turned Bucha into hell Russian invaders mine children’s playgrounds leaving trail of horrific war crimes Mass graves of the Ukrainian civilians Russia claims it is not killingTerror and abductions as Russia tries to break Ukrainian resistance in Kherson and other occupied citiesUkrainian journalist Oleh Baturin feared abducted by Russian invaders in Kherson oblast Mayor of Melitopol Ivan Fedorov abducted after refusing to collaborate with the Russian invaders Russian priest arrested and prosecuted for sermon opposing Russia’s war against Ukraine Russia effectively admits it deliberately bombed the maternity hospital in Mariupol that killed three patients, including a childRussia brings grotesque propaganda to Berdiansk after Ukrainian journalists refuse to collaborate Russian invaders murder Ukrainian volunteers Impassioned appeal from Ukrainian Muslim leader in face of Russia’s war to destroy Ukraine Russia is forcing Ukrainians from occupied Crimea and Donbas to fight in its invasion of Ukraine Children among the dead after Russian invaders opened fire on fleeing civilians Russia installs its propaganda TV after seizing Kherson and imposes 15-year sentences for reporting its invasion of UkraineUkrainian survivors of the Holocaust demand Putin and Russia get out of Ukraine Russia continues its carnage, flouting binding order from ECHR to stop bombing civilians in UkraineBabyn Yar bombed by Russia, 80 years after Nazi Massacre of Ukrainian Jews Russia proposes 15-year sentences and threatens "treason charges" for telling the truth about its war crimes in UkraineRussian schoolchildren told that Russia is bombing and killing Ukrainian children in ‘self-defence’
• Topics / War crimes 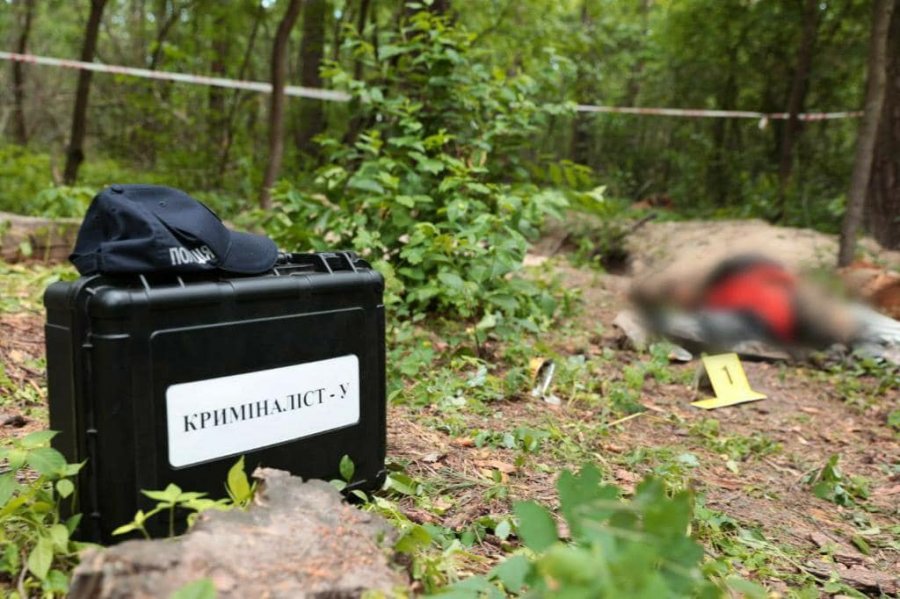 Another grave has been uncovered near Myrotske, Kyiv oblast, where the Russian military were positioned while advancing on Kyiv.  Andriy Niebytov, Head of the Kyiv Regional Police, reported on 13 June that the mass grave contained the bodies of seven civilians, all of them shot in the head.  Many had their hands tied and had gunshots to the knees.  Attempts are now underway to identify the victims.  This has often proven very difficult and in late April, the Bucha City Council announced that free DNA tests were to be available for the relatives of those killed (or missing) from Bucha and the Bucha raion. 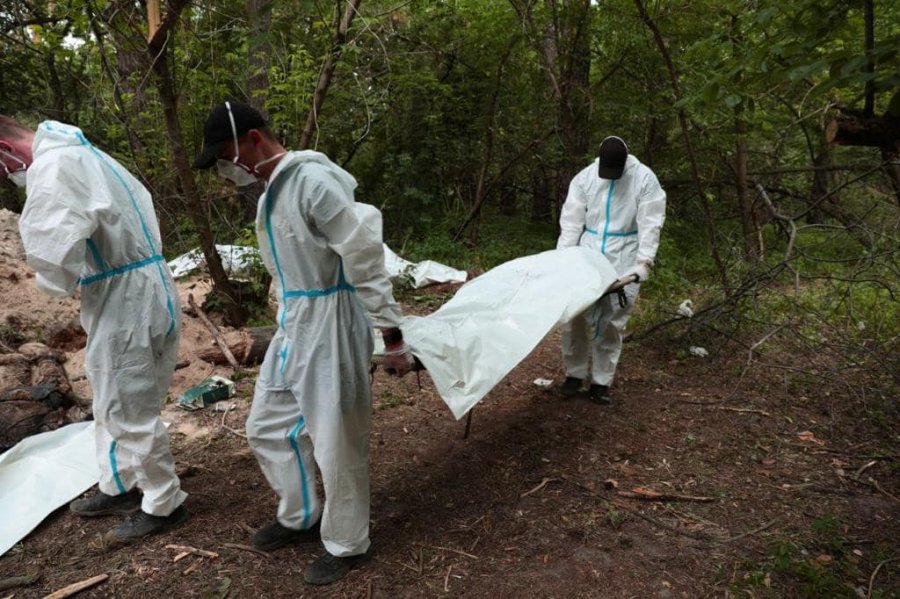 The discovery on 13 June is not the first near Myrotske.  The forest area in question is in the Bucha raion where the grave was found on 29 April of three other victims, whom the Russians had also clearly tortured, before murdering.  Niebytov reported then that the victims had had their hands tied and had been blindfolded, with one also having a gag in his mouth.  They too had been shot in the limbs, before being shot dead with bullets to the ear.  Their bodies were too disfigured to be identified, except by DNA.

On 16 May, Niebytov reported that another makeshift grave had been found near Makarov in the Bucha raion, where the Russians had been positioned.  The grave contained the bodies of three civilians believed to have been shot by the Russians, with these including a 49-year-old Czech national who had previously worked as a long-distance driver, but who offered his services to Ukraine as a volunteer after Russia began its total invasion.  The bodies of the other two men, both in civilian clothing, had not been identified.

The police also found the body of another local resident who had been shot near the village of Rakivka.  The man was a retired police officer whom the Russians forced to undress before killing him.

On 5 June, the body was found of a 41-year-old Ukrainian killed by a bullet to the back of the head.  The man, originally from Volynia in western Ukraine had come to work in Kyiv oblast last year and had disappeared during the Russian forces’ occupation. His body was found in forest near Vyshehrad which was also near where the Russian army had been positioned.  Six days earlier, on 29 May, the Kyiv Regional Police reported that, in the same forest area near Vyshehrad, they had exhumed the body of a man who appeared to have been beaten to death.  Documents found in the makeshift grave were those of 38-year-old Serhiy Kyslytsky who had also come to Kyiv oblast from Volynia. On 15 May,  the body was found of a 28-year-old man who had lived with his parents in Kolonshchyna, near Vyshehrad.  The young man had been shot in the back.  Another victim’s body was found near Vyshehrad on 5 May. He had also been tortured.

Those victims are only some of the huge number of civilians killed since Russia began its full-scale invasion of Ukraine on 24 February.

According to Ihor Klymenko, Head of Ukraine’s National Police, criminal investigations have been initiated over the death of 12 thousand Ukrainians, including very many whose bodies were found in mass graves. Of these, 1,200 bodies, have not yet been identified.

Klymenko explained in an interview to Interfax Ukraine that over 1500 civilians had been killed in Kyiv oblast alone.  Many of the bodies of the Russians’ victims, killed in Bucha; Irpin; Hostomel and Borodyanka lay on the roads where they had been gunned down from tanks or armoured vehicles. They had been killed, Klymenko said, even though they were wearing the white armbands that the invaders had forced people to wear.

A large number of victims have also been found in their own homes, with most having been killed by mortar shells.

As far as mass graves are concerned, Klymenko did not want to give any figures, and pointed out that they were finding new graves all the time.  In one mass grave in Bucha, they found the bodies of 116 civilians, while others may have five to seven victims or even less.  He notes that residents would try to collect the bodies of the death and bury them in parks, or courtyards.

Around 75% of the victims have been men, approximately 2% - children, and the remaining 23% - women. “These were civilians, the people did not have any relation to either the military or law enforcement structures”.

Worth stressing that the figures above are likely to be very much lower than the total number of civilian casualties.  The most modest estimate for the number of civilians killed in Mariupol since Russia began its savage bombing, shelling and siege of the city stands at 22 thousand, with satellite images over the past two months showing  what appears to be rapidly expanding areas serving as mass graves.  The Mariupol city authorities have also reported several mobile crematoria which may well be used for the Russians to hide evidence that proved so damning after the Russian army retreated from Kyiv oblast in late March.

This is without the additional and very real danger of a cholera outbreak in Mariupol, following the destruction of about 90% of the city’s infrastructure, including running water and sewage.