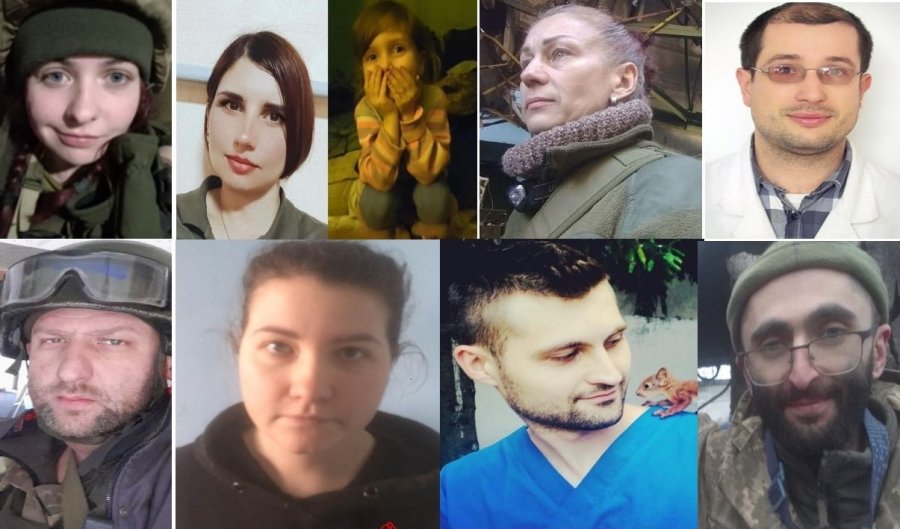 Russia finally released renowned paramedic Yulia Paevska as part of an exchange of prisoners on 17 June.  Russia’s FSB appeared to be treating the courageous medic and well-known sportswoman like a ‘trophy’, so it was vital to get her freed.  There remain, however, very many other medics and paramedics who were taken prisoner while trying to save lives during Russia’s bloody siege of Mariupol and who are illegally being held in Russian captivity.

Many of the imprisoned doctors were originally from Military Hospital No. 555 in Mariupol.  This continued working in the city until it was bombed and effectively destroyed by the Russians on 15 March.  According to Andriy Kryvtsov, whose sister, Olena Kryvtsova, worked at the hospital and is now in Russian captivity, the number of wounded patients had already become overwhelming, yet he knows of cases where the medical staff went out under cover of dark to rescue those injured.

After the bombing of Hospital No. 555, the medical personnel (and, presumably, the patients) were divided between the Illich Factory (the Illich Iron and Steel Works) and the Azovstal Steel Works.

Olena Kryvtsova was among those who were transferred to the Illich Factory.  There were, obviously, no proper operating theatres at the Factory so initially they used those in Mariupol Municipal Hospital No. 1 which was quite close.

Unlike Azovstal which had an extensive underground bunker system, the Illich Factory had no real places for holding out against the invaders, and the medical personnel and wounded were taken prisoner by the Russians on 12 April.

Andriy cannot give any definite figure as to how many medics are imprisoned, but has seen a list of around 25 doctors from the  Illich Factory, with maybe the same number from Azovstal.  He stresses, however, that this is only those from Hospital No. 555, so the real number could be much higher. Kostiantyn Klochykhin, for example, was seized by the Russians while serving as a doctor in Ukraine’s National Guard. Before Russia’s full invasion, Serhiy Doroshenko worked as a paediatrician,  however on 25 February, he joined the Territorial Defence as a doctor.  For some time, his wife and children were trapped in the besieged city, but have now been able to get to safety, unlike Serhiy.  Among the prisoners are also known to be doctors from the 36th medical brigade.

Kryvtsov believes that the medics were initially divided into two groups, with some sent to Donetsk, others (seemingly less) to the Taganrog SIZO or remand prison (in Russia).

Virtually none of the medics’ families heard anything for well over two months, however in early June a video was posted on a Telegram channel from Olenivka in occupied Donetsk oblast. On this, two of the captured medics - Volodymyr Shapkov and Yurik Mkrtchian can be seen working with the wounded.  Some have since been able to make a single short call to their families.

Volodymyr Shapkov and his wife, Olha, are both military doctors, however they have an infant son, and only Volodymyr was working in Mariupol, as a surgeon at Hospital 555.  Olha had last spoken with him on an extremely bad line, back on 5 March, and did not even know with any certainty that he was alive until she saw him on the video. He was then able to phone briefly on 8 June and passed on a plea to Ukraine’s President and to the media to publicize information about their situation.  They are held in appalling conditions, he said, and there is no talk at all of any exchange of prisoners.  He is continuing to carry out his duties as a doctor, but his wife says that it is clear from the video that there are many who have serious wounds and that there is no medication or proper facilities for treating people.

Russia is in grave breach of international law in failing to provide prisoners of war with proper medical care, and in holding medical staff prisoner at all.  It is possible that the medics at Olenivka would refuse to leave their patients, however there is nothing to indicate that they have been asked, and some are held captive in SIZO prisoners in occupied Donbas or Russia.

The Mariupol authorities have reported that the Russian invaders essentially took all of those who survived their bombing, whether prisoners of war or civilians, to Olenivka.  Petro Andriushchenko, Advisor to the Mayor of Mariupol, has called the Russians’ prison at Olenivka “a real concentration camp”, where the prisoners are tortured and live in horrific conditions.

Olha Shapkova says that their former fellow students, who were at Azovstal, are also imprisoned and can’t bear even thinking about the treatment that they are receiving.

“I know one thing, that our country needs doctors and their place is in medical facilities, in hospitals and clinics., not in SIZO.”

Although also a military doctor, Mkrtchian was working in a Dnipro clinic of anaesthesiology, resuscitation, intensive therapy and detoxification when Russia began its full-scale invasion.  He volunteered to transfer to Mariupol, together with some other doctors, even though the city was already under Russian siege and all of the doctors knew that their lives would be in danger.

As well as the video in which he can be seen trying to care for the wounded, Mkrtchian was also able to get a letter to his family and to ring his wife once.  He stressed the urgent need to secure the return to government-controlled Ukraine of the wounded.  He spoke of 300 wounded, of whom 50 are in serious condition, and also pleaded for publicity within Ukraine and beyond.

The publicity is especially vital as the families of these doctors and paramedics have to this day not received any official document confirming that their relatives are in captivity.  As Andriy Kryvtsov puts it, neither his sister, nor the others, have any legal status.  They are not POWs, nor registered as missing without trace and risk otherwise remaining ‘invisible’.

They don’t have any legal status  - are not POWs, not Missing without a trace.  Just ‘invisible’

Other doctors and paramedics whom the Russians are holding prisoner in Russia or in occupied Donbas.

Viktoria Obidina, a medic who was at Azovstal together with her four-year-old daughter, Alisa.  The Russians separated mother and daughter, sending Obidina to a camp in occupied Donbas.  Alisa is now being looked after by relatives.

Tetiana Vasylchenko from Khmelnytsky was working as a paramedic for the Hospitallers civic initiative, at Azovstal.  She left the territory of the factory together with Azov defenders on 17 May and has been imprisoned ever since at Olenivka, in occupied Donbas.  She has only once been able to contact her family, and her sister and adult daughter are also desperately trying to ensure that Tetiana’s plight and that of others imprisoned for trying to save the lives of those defending Ukraine is known.

21-year-old Kateryna (‘Ptashka’, or ‘Little Bird’) is an actress by profession, who began active volunteer work and took medical courses to help as a paramedic.  She joined the Hospitallers in November 2021, and worked as a volunteer in the (unoccupied part of) Donetsk oblast.

In the first days after Russia’s full-scale invasion, she began serving as a paramedic at a Mariupol hospital.  When that was bombed, she and the other paramedics were moved to Azovstal.  It is Ptashka’s voice that is (mainly) heard singing in one of the poignant videos from the terrible weeks when Russia continued its savage attempts to seize the steel works,

Others whose names are known, though the list is much longer