Russia threatens deportation from Kherson & Zaporizhzhia oblasts for pro-Ukraine views and for ‘discrediting’ the invaders Russia instals FSB man, other Russians to ‘govern’ occupied Kherson where the population hates themMayor of Kherson abducted after refusing to collaborate with Russian invaders Russian invaders torture abducted Kherson patriot into ‘confessing’ to surreal ‘abduction plot’ Tortured to death by Russia's FSB for helping to defend Ukraine from the invadersTeachers in occupied Kherson refuse to collaborate with Russian occupiers Russia uses terror and abduction in attempt to force schools to collaborate in occupied Melitopol Mayor of Melitopol Ivan Fedorov abducted after refusing to collaborate with the Russian invaders Russian priest arrested and prosecuted for sermon opposing Russia’s war against Ukraine Russia effectively admits it deliberately bombed the maternity hospital in Mariupol that killed three patients, including a childRussia brings grotesque propaganda to Berdiansk after Ukrainian journalists refuse to collaborate Russian invaders murder Ukrainian volunteers Impassioned appeal from Ukrainian Muslim leader in face of Russia’s war to destroy Ukraine Russia is forcing Ukrainians from occupied Crimea and Donbas to fight in its invasion of Ukraine Children among the dead after Russian invaders opened fire on fleeing civilians Russia installs its propaganda TV after seizing Kherson and imposes 15-year sentences for reporting its invasion of UkraineUkrainian survivors of the Holocaust demand Putin and Russia get out of Ukraine Russia continues its carnage, flouting binding order from ECHR to stop bombing civilians in UkraineBabyn Yar bombed by Russia, 80 years after Nazi Massacre of Ukrainian Jews Russia proposes 15-year sentences and threatens 'treason charges' for telling the truth about its war crimes in Ukraine
• Topics / War crimes 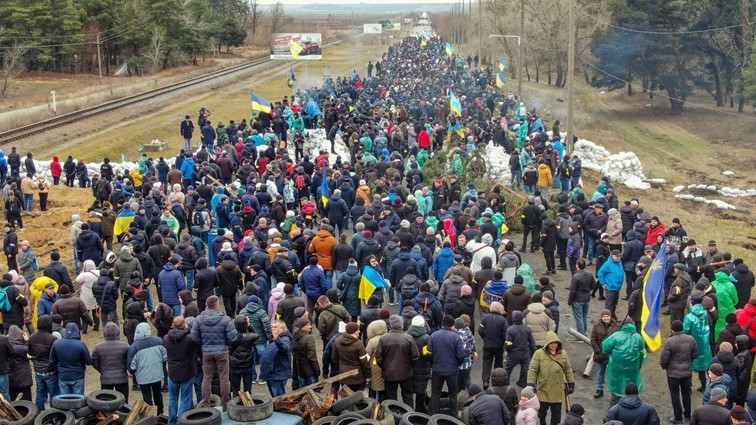 Russia is ploughing ahead with grotesque plans to stage pseudo ‘referendums’ in the parts of the Zaporizhzhia and Kherson oblasts currently under the control of the Russian military.  The aim is clearly to rubberstamp Russia’s plan to annex the territory, which foreign minister Sergei Lavrov is no longer even pretending to conceal.  In an interview to Russian state media on 20 July, Lavrov asserted that Russia’s geographical ‘tasks’ had broadened, admitting that these now included the Zaporizhzhia and Kherson oblasts.  He claimed that this was due to the West providing Ukraine with long-range weapons, although Russia seized parts of these oblasts at the very beginning of its full-scale invasion, and it has been clear since then that it had no intention of leaving voluntarily. It has, in fact, been clear since April, if not earlier, that Russia was planning fake referendums, with the only real question mark being on what the alleged result was intended to rubberstamp – the creation of further Russian proxy ‘republics’ or brazen annexation. 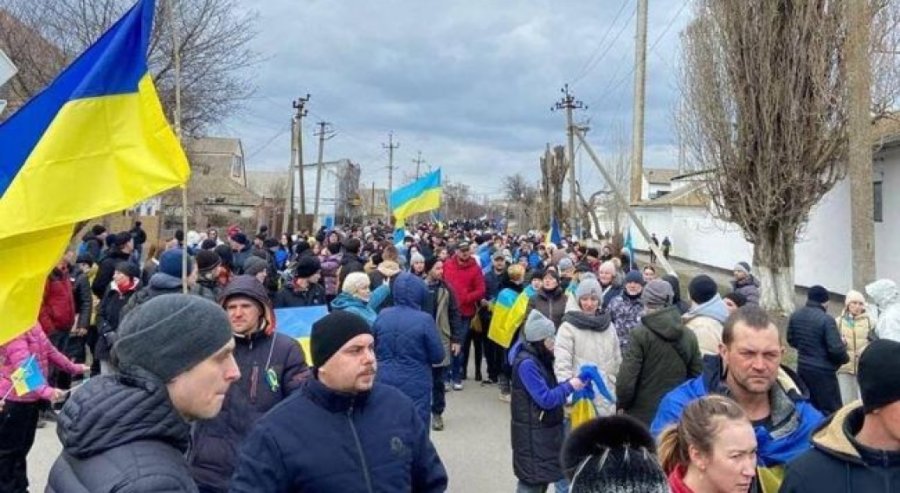 Melitopol residents protesting against the Russian invaders’ abduction of their Mayor, Ivan Fedorov Screenshot from a video posted of the protest

RIA Melitopol reported on 23 July that Edward Balitsky, the Russian-designated ‘head’ of occupied parts of the Zaporizhzhia oblast, had come up with yet another of his so-called ‘decrees’, this time ‘on forming electoral commissions’ for a pseudo-referendum.  RIA Melitopol notes that Balitsky is trying to present this electoral stunt as being “exclusively at the initiative of the people”, though says himself that his ‘decree’ has abolished all the official electoral commissions responsible for democratic elections in Zaporizhzhia oblast.  Balitsky asserts that what he calls a new, open structure, will be formed “from representatives of civic organizations, local gatherings of residents according to their place of residence, work or service, - from the most active and concerned residents of the region.”

RIA Melitopol  adds drily that Balitsky seems to have become muddled with his own lies, since he made this public statement after the so-called ‘commissions’ had been formed.  By the “most active residents of the region” is clearly meant those willing to collaborate with the Russian occupation regime.

On 21 July, Ivan Fedorov, Mayor of Melitopol, which has been under Russian control since early March, noted that the Russians were persisting with their plans for a fake ‘referendum’, but that the population were, however, refusing to take part in the stunt.  Russia was, in turn, resorting to threats and continuing mass abductions of the local population.  He added that over the past week and a half, not one hostage had been released, and over ten people had been taken prisoner.  One of the new victims was a 70-year-old farmer who had refused to answer so-called ‘census’ questions and had rebelled against attempts to buy his grain for virtually nothing.

How, in any case, Fedorov asks, could you call this a referendum if over 60% of the population of Melitopol  have left the city?

Fedorov commented on Telegram after Balitsky’s ‘decree’, warning that people can face real imprisonment for collaborating with the occupation regime if they take part in this pseudo referendum.

The same applies to similar activities in the Kherson oblast which are clearly also planned.

In fact, participation is probably not especially required.  Fedorov reported earlier that the occupiers are carrying out a so-called ‘census’, almost certainly aimed at obtaining personal data that can later be used to rig the supposed ‘results’ of this fake.  The invaders are basically going from home to home.  Where they come upon people whose relatives are either defending Ukraine now, or who were earlier involved in defending Donbas, they carry out ‘searches’ of the homes.

Former Ukrainian soldiers and members of current defenders’ families are among those whom the invaders have been abducting over the last five months.  On 19 July, Oleksandr Starukh, Head of the Zaporizhzhia Regional Administration, reported that the Russians are now holding over 400 Ukrainian civilians hostage.  That figure includes public officials, volunteers and staff of the Zaporizhzhia nuclear power plant, currently and very dangerously under Russian occupation.

Russia staged a pseudo-referendum on annexing Crimea on 16 March 2014, with even the Russian Human Rights Council under President Vladimir Putin refuting the supposed overwhelming support for ‘joining Russia’.

The attempt to repeat this stunt in occupied Donbas, on 11 May 2014, met with stronger response from the West and Russia did stop short of ‘recognizing’ the results of a farcical event, in which people were seen to be ‘voting’ multiple times or without documents.

Any such local ‘referendums’ are in violation of Ukraine’s Constitution and would certainly be just as rigged as those in 2014.  The primary reason , however, for rejecting them is that the Russians have driven huge numbers of people from their homes; have abducted or killed others; and are holding machine guns to the heads of those remaining in cities under their occupation.