Local authorities implicated in fatal attack on Roma residents in Kharkiv oblastTerrifying Precedent Set by Authorities’ Response to Violent Anti-Roma PogromProsecutor refuses to investigate key suspect in murder of Roma leader in Kharkiv oblast Alibi confirmed of man whose arrest for a child’s murder triggered appalling anti-Roma riots‘More doubts than evidence’ in child murder case that triggered shocking Loshchynivka anti-Roma riotAppallingly racist attempt to evict Ukrainian Roma community from village in Kharkiv oblastFatal attack on the Vilshany Roma community reaches the court, but not as a hate crimeCriminal investigation initiated after Mayor of Ivano-Frankivsk orders forced eviction of RomaUkrainian journalist savagely beaten during Euromaidan faced with dubious Maidan “murder” chargesMore deaths needed for Euromaidan investigation to be resumed? Maidan lawyer & 7 others on hunger strikeLoshchynivka child murder – mounting evidence that case against Roma man was falsifiedUkrainian court orders TV Hromadske to retract correct description of C14 as ‘neo-Nazi’Head of Zelensky Administration linked to negotiations with Russia that prompted EuromaidanChilling death threats against Ukrainian human rights activistCrucial victory as Ukrainian court orders compensation for Roma families driven out of LoshchynivkaLviv teenagers on trial for fatal attack on Roma settlementRussia rewards Berkut officers who tried to crush Euromaidan, while revenging itself on Maidan political prisoner KolomiyetsThe arrest for a child’s murder that sparked anti-Roma riots in Ukraine may be based on faked DNA evidenceShocking riots against Roma in Odesa oblast sparked by arrest of a man with an alibiTortured and jailed for 10 years as Kremlin’s revenge for Euromaidan in Ukraine
• Topics / Interethnic relations
• Topics / Law enforcement agencies 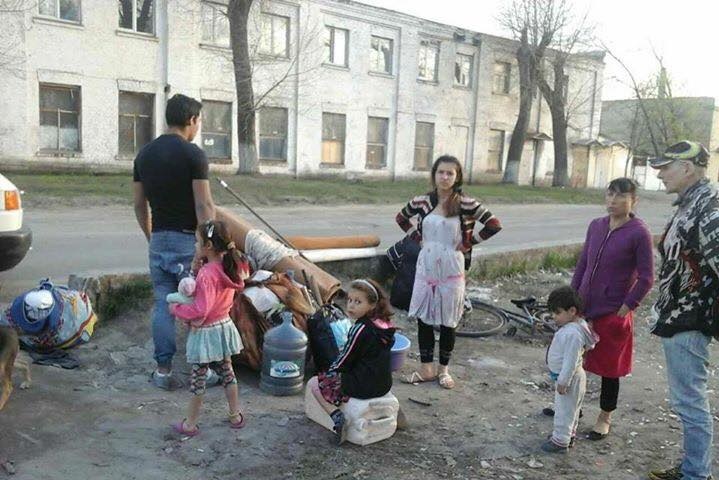 A family who recently spoke out publicly about disturbing measures to drive out Romani residents of Kyiv has been subjected, together with others, to another attack.  The new harassment is especially disturbing as it appears to have been carried out by a group of former soldiers whose civic organization was organized under the patronage of an adviser to Ukraine’s Interior Minister.

A group of around 30 Roma, ethnic Hungarians and other Ukrainians were at the southern part of Kyiv Railway Station at around 23.00 on May 23, waiting for a train to the Zakarpattya oblast.  According to Petro Grigorichenko, Head of the Congress of Ukrainian Romani, they were approached by men in military gear, who demanded to see their documents, searched them and took their money.  Among those beaten, he says, was a pregnant woman.

Grigorichenko first called the police at 23.25, but was forced to make several later calls with the police taking so long to arrive.  The victims of the attack made formal statements to the police when the latter finally appeared.  Grigorichenko also reports having spoken by telephone with one of the assailants.  The person was unwilling to give his name but did confirm that he is a member of a civic organization called ‘Bezpeka zhyttya’ [‘Living safely’].  This is made up of former soldiers who previously fought in Donbas, and is under the direct patronage of Ilya Kiva, a person whose work within the Interior Ministry has constantly elicited controversy.

In the video here, Kiva claims that these soldiers who have defended their country at the front can be trusted to never get into any dishonest dealings, and that their role is to protect “our mothers, sisters, children” from the pickpockets, etc. at the station.  He constantly stresses their civic position, although earlier in the video it is made clear that this initiative is also a way for former soldiers to earn a living.

Viacheslav Likhachev, Head of the National Minority Rights Monitoring Group, confirms the details above, and says that the people were in fact hounded around the station for several hours.  Whatever claims Kiva may make, the people in this case had tickets for their destination, and were simply waiting for the train.

Among the Roma who were targeted were Rita Pastrama and her family who had spoken two days earlier at a press conference on the arson attack just prior to Eurovision on their former home in the Darnytsya district of Kyiv.

Those events at the end of March - beginning of April were criticized by human rights groups who spoke of elements of ethnic cleansing.  On March 31 in one settlement, and on April 5 in another, unidentified individuals turned up and ‘warned’ the residents of likely arson attacks and offered to move them.  At the press conference on May 21, Rita Pastrama explained that a few people had appeared several times, never providing any identification, but talking about how, if they didn’t leave, some ‘Nazis’ would appear and show them no mercy.  She says that they were offered help in leaving, though that in most cases never appeared.  She was bought a ticket to the Zarkapattya oblast only to get her to leave.  All were forced to abandon their homes and possessions.

The threats proved real, with the settlements shortly afterwards burned down.  It seems likely that this was motivated by a wish to remove ‘unsightly settlements’ in the city prior to the Eurovision competition.  A similar action had taken place before the Euro-2012 Soccer Championship.

In 2017, there was seemingly less direct evidence of the authorities being involved, however there is little to suggest that they tried to prevent the forced eviction of people from their homes.  The police had reportedly heard of the threats while quite illegally visiting the settlement to try to take fingerprints of people.

After the press conference, the Pastrama family, with their three small children, headed off to the Ukrainian Helsinki Human Rights Union, whose lawyers are representing the victims of the arson attack.  After leaving the offices, with bags containing humanitarian aid from UHHRU, they got stopped by police and taken to the local police station “to check that they hadn’t stolen anything”.

They had not.  The only people who did steal others’ possessions in this tale were the railway vigilantes, whose post outside the railway station and behaviour, together with the support given them by an advisor to Interior Minister Arsen Avakov, surely warrant investigation.