So what will “New SBU” be?What is wrong with the bill on SBU?Fake ‘Ukrainian fascist’ arrested and charged with working for Russia and its proxy Luhansk ‘republic’ Zelensky gives top post to official involved in storming of Maidan 2020: There was no worse year in the realm of human rights after the Revolution of DignityA brief description of the KHPG strategic litigations in July–December 2020Lukashenko plotted to kill Sheremet yet Ukraine has charged people with no motive for his murder 80-year-old Ukrainian charged with trying to overturn the government via a Facebook repostRussia launches dangerous new ‘foreign agent’ offensive against independent NGOsOver 10 thousand Ukrainians demand that Zelensky dissolves corruption-tainted Kyiv courtKey suspect testifies that Kherson regional head commissioned savage killing of Katya HandziukKyiv court upholds ex-Yanukovych aide’s attack on anti-corruption investigative journalistsA brief description of the KHPG strategic litigations in January – June 2020High-level sabotage of judicial corruption probe into Ukrainian judges boasting of ‘political prostitution’Kyrgyzstan: Human Rights Defender Azimjon Askarov Dies in PrisonDangerous arson attack on prominent Ukrainian anti-corruption activist“Crimea is our land. We did not give it to Russia, nor did we sell it” Powerful final court address by Crimean Tatar human rights defenderUkraine taken to European Court over Sheremet murder trial by press conferenceKherson regional head remanded in custody over murder of civic activist Katya HandziukOdesa activist and target of three savage attacks charged with murdering his armed assailant
• Topics / Law enforcement agencies 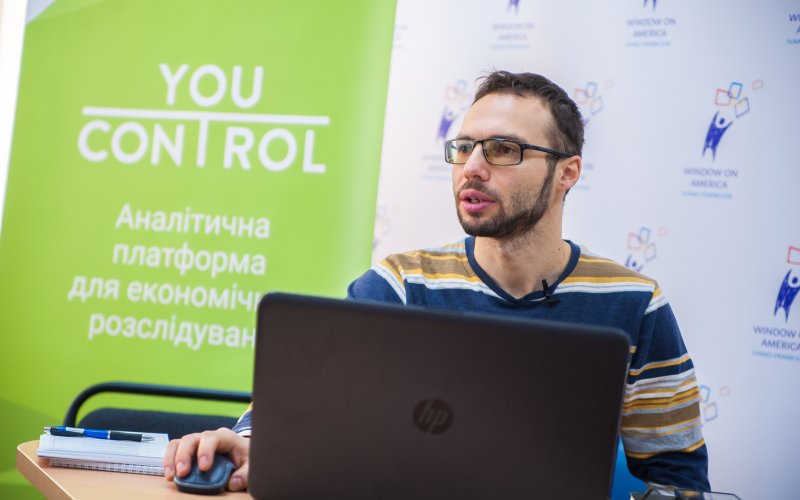 A number of Ukrainian anti-corruption NGOs, including Transparency International in Ukraine, have expressed concern over the criminal proceedings against YouControl and its founder Serhiy Milman which they view as pressure on an open access firm providing invaluable assistance to anti-corruption campaigners and journalists.

YouControl is a Kyiv-based firm which offers “full dossiers on each company in Ukraine”.  Its site presents the information it offers as helping companies to avoid making losses through dealings with risky clients or partners.  As the authors of an open appeal over the prosecution wrote, YouControl “provides free access to consolidated state registers which has helped journalists carry out hundreds of investigations”.

On March 23, 2017, Ukraine’s SBU [Security Service] carried out searches of the homes of YouControl’s founder and General Director Serhiy Milman, Commercial Director Olena Lapa, one of their managers, and their parents, as well as of the homes of two directors of technical subcontracting firms, and of the YouControl central office.

An official announcement from the SBU that day stated that the company was accused of “unlawful gathering and sale of information on restricted access and which is State property”.  YouControl was alleged to have unlawfully interfered with the operations of the automated system and computer networks of the Justice Ministry, the Fiscal Service and the State Judicial Administration.  It was claimed that they had “sold access to this illegally created base claiming it to be gathered from open sources”. Criminal proceedings had been initiated under Article 359 § 2 of the Criminal Code (Unlawful use of special technical means of illicitly obtaining information).

In reporting the deployment of at least 100 officials for all the searches, Milman noted that the operation had coincided with the killing in the centre of Kyiv of former Russian State Duma deputy Denis Voronenkov, who had vital information for Ukraine on the invasion of Crimea.  “The SBU knows best, of course, whom it should defend against whom”, he added sarcastically.

Milman also informed that the court search warrant said that YouControl was accused of cooperation with special and intelligence bodies of the Russian Federation.  This he dismissed as “absurd”, while the charge of unauthorized access to open data he called “simply in breach of the law”.

On January 2, 2018, with a court hearing due on the SBU’s attempt to have Milman remanded in custody, 14 media and anti-corruption NGOs issued “an open letter regarding the pressure on the YouControl company”.

They began by pointing to the slowing down of anti-corruption reform seen in 2017, and the attempts “by pro-government elites to put direct pressure on members of civil society, using all available methods”.  They suggest that Ukraine’s political elite have used the SBU against a company that has helped civil society to uncover numerous corrupt dealings at all levels.

Having analysed the application for the freezing of assets, as well as the evidence provided by the SBU during the nine months following the initiating of the proceedings, the NGOs can see no serious proof against Milman and his subordinates.

There had been seven court rulings ordering the return of seized assets, they note, yet this has still not happened.  In fact, on 27 December 2017, Milman was summoned to the SBU, purportedly to have the money returned.  He got there only to be formally told that he was under suspicion.

The NGOs called on the SBU management “to stop lawlessness regarding the use of various methods of pressure on people involved in business” and on the judges examining the case to do so openly and without bias.

The call for openness is particularly important since a number of court hearings on freezing assets have been held behind closed doors.

The court on January 2 released Milman on bail of over 50 thousand UAH, and also ordered that he hand over his passport.  He is accused of “unauthorized interference in the work of computer networks”.

YouControl’s position that the SBU claims are aimed at putting pressure on the company has now also been reiterated by Transparency International in Ukraine.  In a statement dated 23 January, they also point to the vital role that YouControl has played in enabling investigative journalists to uncover cases involving corruption, as well as abuse of power or public officials’ conflict of interests.  It would be quite unacceptable, they insist, to hold court hearings on this case behind closed doors.  They consider that the approach demonstrated recently by the SBU suggests motives for this prosecution that are not linked with the wish to prevent crime.