Russia’s Lie Machine Fans Flames of Odesa ‘Massacre’Antonenko released from custody with Ukraine’s Sheremet murder trial arousing ever more doubts«Justice being taken away, then, what are kingdoms but great robberies?»There are signs of usurpation of power: a statement by human rights organizations regarding sanctions against Ukrainian citizensUnique Foros Park destroyed in Russian-occupied Crimea Russia to answer to Strasbourg for imprisonment of historian of Stalin’s Terror, Yury Dmitriev Record prison sentence for Christian faith in Russian-occupied CrimeaUkraine’s most malicious miscarriages of justiceShevchenko and Russia’s first Ukrainian political prisoner in occupied Crimea Ukraine imposes sanctions on pro-Russian MP Medvedchuk & his wife. What about criminal proceedings?Russia reverts to worst Soviet times in reprisal sentence against historian of the Terror Yury DmitrievWhat is wrong with the bill on SBU?Russia forced to ‘change the status’ of occupied Crimea because of sanctions Ukraine’s President Zelensky blocks three pro-Russian channels linked with MedvedchukRussia threatens criminal prosecution over calls to impose sanctions PACE finalizes capitulation to Russia, while listing all reasons why this is appeasement Not just Navalny. EU sanctions needed over 18-year sentences against Crimean political prisoners New Russian offensive to deprive imprisoned Russian Historian of the Terror Yury Dmitriev of his lawyer Application practice of Article 109 of the Criminal Code of UkraineApplication practice of Article 110 of the Criminal Code of Ukraine
• Topics / Politics and human rights 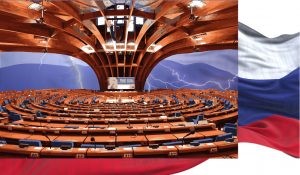 After the 2014 annexation of Crimea, PACE ruled to apply sanctions against Russia and suspended the voting rights of the Russia delegation to PACE.[1] PACE considered that Russia’s actions on the territory of Ukraine constituted “beyond any doubt, a grave violation of international law” and that they were in clear contradiction to the commitments Russia had undertaken upon accession to the CoE as “by violating the sovereignty and territorial integrity of Ukraine, Russia has created a threat to stability and peace in Europe.”

In subsequent resolutions PACE called on Russia to reverse the illegal annexation of Crimea; investigate deaths, disappearances and human rights violations committed by police and (para) military forces in the region; disband paramilitary forces; cease harassing Crimean Tatar institutions and organizations; and cease pressure on independent media.  The European Union[2]and the United States[3]also imposed sanctions/restrictive measures against Russia/Russian citizens. In an act of retaliation, Russia suspended its annual 33 million Euro contributions to the CoE in 2017.

We believe that sanctions constitute an essential tool for de-legitimising Russia’s illegal actions against Ukraine and for preventing the further spread of the conflict.

Furthermore, normalising the forceful annexation of a territory of a sovereign state, accompanied by flagrant violations of international humanitarian law and human rights will create a serious security threat not only for Ukraine but for the entire region.

For the above reasons we call on PACE and the Committee of Ministers to demonstrate unity in upholding the values and principles on which the Council of Europe is based and fully keep sanctions in place until Russia meets the conditions for which these sanctions were imposed.

Also check out our position paper on this topic here.

[1]Resolution 1990 (2014), Reconsideration on substantive grounds of the previously rarified credentials of the Russian delegation