Documenting war crimes in Ukraine.
The Tribunal for Putin (T4P) global initiative was set up in response to the all-out war launched by Russia against Ukraine in February 2022.
• Topics / Dissidents and their time
• Topics / We remember 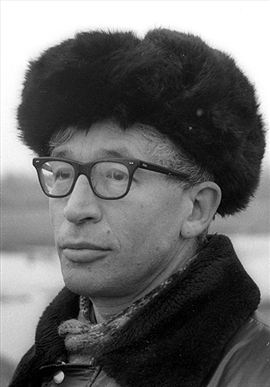 Human rights defender and former political prisoner, Yury Alexandrovich Shkhanovich has died in Moscow at the age of 79.  By profession a mathematician and educationalist, Yury Shikhanovich was involved in the dissident movement from the 1960s.

In 1968 he was dismissed from Moscow State University for signing a collective letter in support of Alexander Yesenin-Volpin. He was for many years one of the editors of the Chronicle of Current Events (a samizdat publication) and a friend of Andrei Sakharov.  Sergei Kovalev recalls:

“Yury Alexandrovich Shkhanovich was a very important figure in the hold moral and legal resistance to the Soviet regime of that time. He did a huge amount for Chronicle of Current Events. We prepared the first and second issues together before his first arrest.  While he was imprisoned, I prepared the Chronicle; then I was imprisoned, he took part in preparing it.”

Kovalev goes on to say that Yury Shikhanovich was one of the people who determined the Chronicle’s style – absolute accuracy with all information scrupulously checked.

Yury Shikhanovich was arrested in September 1972, found mentally unfit and incarcerated in a psychiatric “hospital”. After being released in mid 1974 he again took part in the human rights movement.

Dissident Sergei Grigoryan met Yury Shikhanovich in 1980 on his release from a five year sentence under a political article of the Criminal Code.

“Yury Shikhanovich arrived on the second or third day after my release. It turned out that it was he who had taken care of my family from the Solzhenitsyn Fund. It was he who all those 5 years had helped my wife and children. What is more this was a special form of help, linked with his particular personality. He did not just pass on what was due Tamara and the children from the Solzhenitsyn Fund, doing that in an extraordinarily scrupulous manner, He also tried to give moral support, at least somehow improve their life. He’d get them out from time to time to the cinema, to some particular showing, to some exhibition or other. He always sought to help the people he was concerned about really live at least a bit better and more cheerfully in this gloomy world and very gloomy circumstances.”

When Grigoryan, finding out that Yury Shikhanovich was also one of the editors of the Chronicle of Current Events, immediately said that he wanted to be involved, that he had raged during those 5 years not just at the KGB, but because he was doing nothing, Shikhanovich smiled and told him to enjoy his freedom just a couple of months.

Yury Shikhanovich was arrested over the Chronicle of Current Events for a second time in November 1983 and sentenced to 7 years. He was released at the height of perestroika in February 1987.

When political repression began again during the Putin years, Yury Shikhanovich began attending most  court hearings into such politically-motivated cases in order to show moral support.