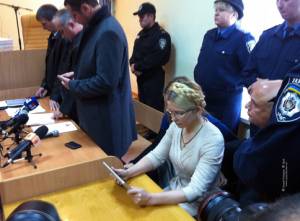 The verdict against Yulia Tymoshenko was announced on 11 October. Ukraine finds itself in a situation where its future depends on the will and the fate of two people: Yanukovych’s will and Tymoshenko’s fate.

What did the conviction of Yulia Tymoshenko demonstrate?

On the other hand, any unbiased observer will have realized that the Head of State has taken a firm grip not only of bodies of executive power, the law enforcement agencies and Verkhovna Rada, but also the entire judicial system.

The period of transformation of Ukraine’s political system from a state of unconsolidated democracy to an authoritarian regime is complete.

Congratulations, folks – an authoritarian regime is set up in Ukraine.

We will return to whether Viktor Yanukovych  will feel comfortable in these conditions a little later.

Secondly, the events of 11 October will undoubtedly spur the opposition to unite.

It is not out of the question that during the next parliamentary elections, the opposition will have a united list of candidates or will boycott them altogether. However one needs to understand that a boycott of the elections is extremely dangerous – after all that could throw the opposition forces onto the outskirts of political life and marginalize their activities.

Thirdly, the public have received yet another confirmation that the case against Yulia Tymoshenko is nothing but political repression.

There is another consequence of the harsh sentence and that is increased negativity towards the authorities, to Viktor Yanukovych himself and disillusionment in Ukraine’s judicial system. After all any ordinary Ukrainian will “measure” Yulia Tymoshenko’s sentence against himself: if they can do it to her, they’ll do it to me.

And lastly, there are the consequences for foreign policy. As of today Viktor Yanukovych has got himself into a kind of trap where neither Russia, nor united Europe, nor the USA, for various reasons are “delighted” over the sentence.

Clearly neither Dmitry Medvedev nor Vladimir Putin can be positive about it since the sentence against Yulia Tymoshenko is one of the stones in the foundations for delegitimizing the gas accords between Russia and Ukraine in 2009.

On the other hand, after such a sentence, even if the EU-Ukraine Association Agreement and the Free Trade Zone Agreement are concluded, they most certainly will not be ratified in the near future.

It remains to be hoped that Viktor Yanukovych will nonetheless carry out the option of decriminalizing the article under which Yulia Tymoshenko has been convicted.

That will require the relevant amendments to the President’s draft bill on decriminalization of economic crimes which was recently submitted for the Verkhovna Rada’s consideration and his signature on it.

If the Head of State does that, it will soften the consequences of what is negative today. However it cannot remove it altogether.

Yulia Tymoshenko will undoubtedly appeal against the court ruling. It is extremely important for her to go through all the Ukrainian court stages as soon as possible in order to be able to lodge an application with the European Court of Human Rights.

If in that Court’s judgement Yulia Tymoshenko is found innocent, the results of all this saga for Viktor Yanukovych could be catastrophic.