Yet more witnesses testify in Yury Lutsenko’s favourFormer German Ambassador: Ukrainians must not be held hostage by one leaderDanish Helsinki Committee issues damning legal assessment of the Tymoshenko caseUkraine parliament rejects Tymoshenko releaseChanges in judge corps in the court where Tymoshenko appeal to be heardJose Manuel Pintu Teisheira: Yanukovych understands what needs to be doneGerman Minister: Release of political prisoners in Ukraine would be a signal to the EUTymoshenko presented with new charges in SIZO cellThe number of criminal investigations against Tymoshenko is growingPACE Co-Rapporteurs: Serious measures cannot be excludedPACE Co-Rapporteurs not allowed to visit Yulia TymoshenkoBritish Foreign Minister: The fate of the EU-Ukraine Association Agreement is up to KyivLutsenko Trial: Witnesses questioned after the InvestigationYet another witness confirms Lutsenko’s predecessors could also be prosecutedHard-hitting Resolution on Ukraine also likely from US CongressUkraine’s Apathy TestPolitical Motives behind Failure to treat Yury Lutsenko?European Parliament Resolution: Tymoshenko trial could jeopardise EU-Ukraine association agreementHuman rights organizations speak out on the sentencing of Yulia TymoshenkoProsecutor General reopens criminal investigation against Yulia Tymoshenko
• Activity / Political persecution in modern Ukraine
• Topics / Politics and human rights
• Topics / The right to a fair trial

Lutsenko trial: Court allows witness testimony to be read in his absence 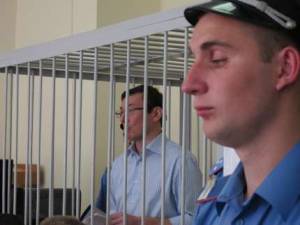 In view of the number of prosecution witnesses who have so far changed their testimony in court or accused the investigators of having twisted their words, the decision on Tuesday to use a witness’s testimony while he is in hospital must be of concern.

Vasyl Sheludko, 47th witness, was in charge of the housing section of the MIA Economic Department.  He did not appear in court on Monday and the panel of judges decided to have him brought to the court by force. However on Tuesday presiding Judge Serhiy Vovk announced that a medical certificate had been provided, that Mr Sheludko is undergoing chemotherapy and will be for a month, and asks the court to continue without him.

The Prosecutor spoke in favour of continuing the hearing in Mr Sheludko’s absence, but reading his testimony during the pre-trial investigation.

Yury Lutsenko’s lawyers objected, saying that his testimony could not be read out since Mr Sheludko had already begun testifying in court, and his testimony had differed significantly from that at pre-trial investigation stage.

After consulting in the courtroom, the judges decided to ignore the defence’s arguments and have Mr Sheludko’s previous testimony read out.

Yury Lutsenko himself then read out the judgement from the European Court of Human Rights in the case of Oleg Kolesnyk v. Ukraine (application No. 17551/02) from 19 February 2010 where the applicant had asserted that his right to a fair trial had been violated because he had been questioned without a lawyer and had not been given the chance to question prosecution witnesses.  The Court found in the applicant’s favour.

From the report of proceedings on Yury Lutsenko’s party’s website  http://nso.org.ua/ua/news/9511