Foreign Ministry: Ukraine has no plans to sign CIS Archive AgreementHistorians fear Moscow wants to control all post-Soviet archivesSBU to question another 16 people in Ukraine’s “historian case”SBU: 5 Hour interrogation of historian Ruslan ZabilySBU continues misleading the public over historian Ruslan ZabilyClassifying Zabily’s case as secret restricts his right to defenceAbsurdity and RealityWho’s Afraid of Ukrainian History?Museum Prison Tyurma na Lonskoho to be passed to Institute for National RemembranceUkrainian academics demand an end to State intrusion and persecution of historiansSecurity Service picketed by opponents of a return to 1937Petition by historians in response to detention of their colleague Ruslan ZabilySBU continues destroying the Museum-Prison “Tyurma na Lonskoho”Protest Action: “SBU! Your duty is national security, not persecuting historians”Stop the Persecution of Historians!Ukraine’s Case of the HistoriansSBU claims that historian wanted to pass on State secretsDirector of the National Museum – Prison “Tyurma na Lonskoho” detained by the Security ServiceThe Security Service has no interest in democracy ...SBU and democratic values
• Topics / Access to information 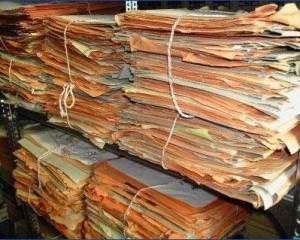 The Verkhovna Rada last Tuesday voted on a draft bill on amendments to the Law on the National Archive Fund and Archival Institutions”. The bill was passed in its first reading, with 261 votes out of the 389 registered.

The bill proposes introducing a norm which would ban removal from the archives of confidential documents or material containing secret information for political or ideological reasons, as well as any documents created before 1946.

Director of the National Memorial Museum of Victims of the Occupation Regimes “Tyurma na Lonskoho” in Lviv, Ruslan Zabily explains that at present there are several laws which can be freely used by archive staff. These are the Laws on Information; on Access to Public Information; and the Law on the National Archive Fund and Archival Institutions. He says that their authority needs to be clearly delineated in order to exclude mutually exclusive or contradictory treatment.  For example, you have the apparently ban on restricting access to information which is of public significance, while on the other you need special permits to see archival criminal files held in the enforcement bodies’ archives which were not and are not considered secret. Why have such bureaucratic obstacles?  There are a lot of such issues which need to be resolved, and real changes, not merely cosmetic, are needed,  Mr Zabily says. He adds that it is useless to expect that the present government will show any interest in improving access to the archives.

He also fails to understand what the significance of 1946 is, and says that the draft law would mean that documents created after this arbitrary date could be in threat.

He is concerned about access to archives. “I’ve seen how archives in neighbouring countries work and must note that the level of access to information in them is much better both for researchers and for members of the public. It would therefore be good to bring the legislative base and work of the archives up to European standards, and not think up new norms which make the work of researchers and other interested individuals more difficult”.

Ukrainsky Tyzhden also mentions that the draft law proposes to restrict access to personal files up to 75 years.