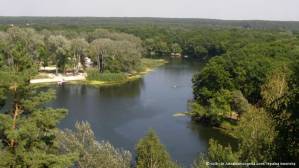 The national nature park Homilshanski Forests has been without a director for some time and there are grounds for believing that Ivan Severin will be appointed to this point. Environmentalists are up in arms since in 2010 Severin initiated a petition to get the park removed from the nature reserve fund.

Homilshanski Forests cover almost 14 and a half hectares of unique territory with forest and a huge number of rare species of plants and animals entered in Ukraine’s Red Book, or the Red Book for Europe. Oleh Bytin from the environmental NGO Pechenyhy explains that Homilshanski Forests are virtually unique in Ukraine since the number of species under threat of extinction has led to a total ban of tree felling or tourist events.

The State Forest Reserve Agency did not extend the previous director’s contract this year, and now needs to appoint a new one. In accordance with legislation, the reserve staff put forward their candidate.  One of the staff told Deutsche Welle that they sent their proposal to the regional department of the Agency, but these did not reach the central office of the State Forest Reserve Agency in Kyiv.

The candidate proposed by the local district administration is one of the local deputies, Ivan Severin. The latter’s attempts to get the park dissolved as a reserve failed after public hearings where scientists demonstrated that the supposed littering, illicit tree-felling and seizures of land by businessmen which the deputy was using as grounds for the petition were outside the territory of the national park.

The Homilshanski Forests nature park is a few dozen kilometers from Kharkiv and businesspeople have on a number of occasions proposed building cottages or elite recreational complexes on the land.

The park’s staff and environmental NGOs have appealed to President Yanukovych warning of the danger to one of the most beautiful national parks in Ukraine. The park’s staff have yet again sent their proposal for new Director.  The State Agency says that a meeting has been held on the subject of the park but that a new director has not yet been appointed.

From a report at the Deutsche Welle Ukrainian Service