Criminal investigation against victims of surveillance

In yet another development which is at once worrying and grotesquely silly, the Chernivtsi Regional Police have announced that they have begun criminal proceedings over interference in police work against Arseny Yatsenyuk and Hennady Moskal.  This follows formal allegations by the latter that Yatsenyuk, leader of the Batkivshchyna faction in parliament, had been under surveillance while taking part in the “Rise Ukraine!” rally in Chernivtsi.

On 30 March Batkivshchyna reported that after making the discovery, Yatsenyuk called Moskal and asked him to check the number plate of the car involved.  Moskal found that the number was not registered, and the police were called.  They came, and found among other things other number plates which were not registered.

The photos and video of this can b e found here

On 31 March the Chernivtsi Regional Police Press Service announced that a complaint had been received on 30 March from MP Arseny Yatsenyuk alleging that during a meeting with voters in Chernivtsi, he had been subjected to surveillance. It says that the complaint had been received and an investigative team sent out to investigate.  This team supposedly found that “measures had indeed been carried out by Chernivtsi Regional Police staff on a work vehicle.  These measures were not linked with the activities of the national deputies”.

The report asserts that police officers in a work vehicle had their car blocked by two other cars whose drivers then called Yatsenyuk and Moskal.  The MPs examined the car and also carried out a personal search of the police officers. 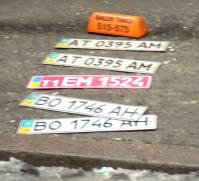