Head of Transparency International in Ukraine fined for peaceful protest 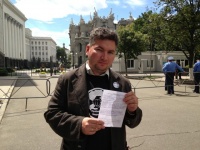 Administrative charges have been brought against Oleksiy Khmara, Executive Director of Transparency International in Ukraine in connection with a protest on 24 July outside the President’s Administration in Kyiv.  The entirely peaceful action was intended as a performance entitled “Break down the wall of bureaucracy” and was organized by Transparency International in Ukraine, together with the Anti-corruption Council of Ukraine. The aim was to vividly demonstrate the bureaucratic hurdles which civic activists have to face when putting their proposals to officials.  The protest was designed to coincide with the presentation of TI in Ukraine and other organizations’ monitoring of the State anti-corruption programme and to try to present it to the President.