• Topics / The right to health care 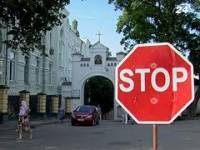 The eviction began on Friday of patients from the HIV/AIDS and Viral Hepatitis Clinic until now situated on the territory of the Kyiv Pecherska Lavra.  The patients are supposedly to be relocated in a new block of the Hromashevsky Institute of Epidemiology and Infectious Diseases, however journalists who have been shown the block report that it is very far from being ready.

In the meantime, patients who are gravely ill with highly contagious diseases are apparently being placed in different clinics around Kyiv.  Or nowhere.

The website Fraza reports that the city Sanitary and Epidemiology Service carried out an unscheduled check on the basis of which the necessary orders were issued.

This pretext was needed since as recently as the beginning of July the Head of the Kyiv Pecherska Lavra, Father Pavel had asserted that the hospital and the patients would be there as long as necessary.