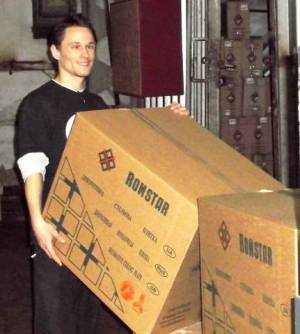 The words in the title reflect the bitter reality as seen by 26-year-old Vladimir Melnkikov, raised from earliest childhood in a Ukrainian orphanage.   Willing to work hard and make his own way in life, he needs just one thing – an affordable roof over his head.  Little to ask given the number of laws which supposedly protect the rights of orphans, and yet even that has been denied him.  Attempts are underway now to uphold his rights through the courts.

Vladimir remembers lots of good and bad things about the orphanage which became his only home from when he was two months old.  Many of his memories would be common to all children: giving the teachers a hard time, clowning around with friends.  Some, however, are very specific to Ukrainian orphanage children.  He remembers never having enough to eat.  He and the other kids would look for work, picking fruit or washing dishes to be able to buy some more food.

He remembers the staff of the Kotov school-orphanage well, and says that he still keeps in contact with some of them.  He was then sent to a technical-vocational college [PTU] where he trained as a painter and plasterer.

From then on the problems began. He was sent to work at a place where hostel accommodation was provided, but the conditions and pay were terrible, and he resigned.  Without any money or a home, he set off for Odessa, hoping to find some work there and rent a flat. He spent the summer sleeping on the beach, eating almost nothing. “I watched how rich people lived it up and told myself that I wouldn’t end up in the dregs, that I’d pull myself up by the teeth,   to have a decent life.  After all it couldn’t be true that nobody needs a  person, a citizen of his own country… I was naïve then… Perhaps …  Nobody needs us”.

Vladimir explains that he found work, somewhere to live.  Registered in Odessa and applied to the authorities to join the housing queue as an orphan.  He was told that he needed to have been registered in Odessa for five years.  They did not tell him, however, that since he would be over 23 then, he would not be able to join the special queue for orphans.

And how could he know?  Nobody had ever told him, neither in the orphanage, nor at his vocational college.  On finishing it they sent him to a workplace which provided hostel accommodation, but only of course while he remained there.

Since then Vladimir has tried all avenues, written to the President, Prime Minister, others.  He receives only fob-off letters.  The Odessa Regional Administration sent him to a local Social Service Centre for the Family, Children and Young People.  They in turn messed him about for some time, then finally said that they couldn’t help him.   The same happened in numerous other public offices.

He was then introduced to Igor Khmelevsky, also an orphan, who created a civic organization for defending the rights of people like Vladimir.   Vladimir speaks of Igor with respect and warmth.

Igor Khmelevsky was murdered in February 2013.  He was 26.  The circumstances of his death, and that of one of three people arrested on suspicion of murder, are of great concern and deserve scrutiny.  Calls for an investigation have thus far fallen on deaf ears.

Igor Rebenchuk asks Vladimir what next.  “I hope you’re not giving up, and won’t stop?”

“Of course not, orphans have an acute sense of justice and when a person’s rights are violated, somebody is treated badly, we can’t stand back.  We’ll give the shirt off our back for somebody in need.

Are things really so bad in our country that people like me, orphans, are forced to cope themselves without any support from officials who are paid for by taxpayers, including me.  That orphans are left to cope alone with their problems and survive how they can, quite often turning to crime simply to survive. As it is we grew up without parents, learned all the delights of orphanage life. We didn’t have anyone to give us a start in life, just to give us psychological support.  And now the state’s turning its back on us, leaving us to fend for ourselves. The laws unfortunately work only for high-ranking officials, and people like us who have been defenceless since birth, and are still so now.

I don’t want palaces or castles. I just need basic accommodation as I’m entitled to by law. Otherwise I don’t see any future at all. Most of my salary goes on paying for accommodation.  I’ll never be able to buy myself a flat, or even a room.”

Vladimir has made another application which he expects will lead nowhere, like all previous ones.

Thought hopefully not nowhere, since he plans, if he receives another refusal to help, to approach the court to reinstate his rights.  If need be he will turn to the European Court of Human Rights.

“I see no other legal ways of not ending up a homeless down-and-out in this country.”

From an article by Ihor Rebenchuk