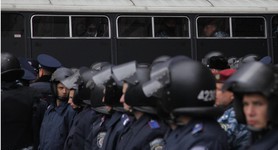 The bill thus blocked would schedule the elections for 60 days after the adoption of the Resolution.

There has been no Mayor in Kyiv for well-over a year, and the present City Council’s term in office ended at the beginning of June.  It is widely believed that the Party of the Regions is blocking the elections because the results would not be favourable to the ruling party in the run-up to the presidential elections in 2015.

In September the Committee of Voters of Ukraine [CVU] published a public opinion survey which made it clear that a majority of Kyiv residents want the elections to be held. The survey carried out for CVU by the Kyiv International Institute of Sociology showed that 70% of Kyiv residents knew that the Kyiv city authorities’ term of office had ended on 2 June. Over 60% believed that the elections should be held without delay, in 2013.

In more moves which it is hoped the EU was observing, the leaders of the three opposition parties were prevented from entering the Kyiv Council buildings where a meeting  of a Council viewed by many as now lacking any mandate was in session.

Throughout the day a large contingent of Berkut riot police prevented peaceful protesters from getting near the Council building.