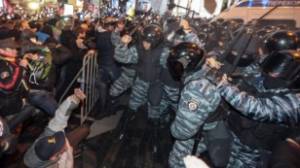 The National Union of Journalists and other media organizations have announced that they are leaving the inter-departmental working group under the president.  This is in protest at the violence by police against members of the peaceful protest and journalists.

The statement says that the National Union of Journalists, Telekritika, the Institute for Mass Information and the Ukrainian Periodic Press Publishers Association are leaving the working group on analyzing observance of legislation on freedom of speech and journalists’ rights.

They express their strong outrage over numerous cases of police violence against journalists, young people, students and other peaceful protesters.

Over the last four days over 40 Ukrainian and foreign journalists have been brutally beaten, most of them by Berkut riot police.

The journalists express their dissatisfaction with the working group which had basically turned into a means of PR for those in power.

“Throughout Yanukovych’s term in offence the situation with freedom of speech has continued to deteriorate and there are deliberate attempts to clear the media of any independent information.

The regime has clearly demonstrated that it is an enemy of civil society. From now on we consider not only that it is senseless to engage in dialogue, but also amoral and unacceptable”.

They will resume dialogue only when those guilty of crimes against journalists are punished, and the regime in practice proves its commitment to European values and human rights.