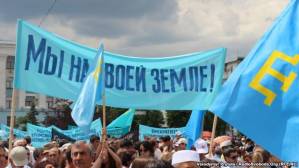 The banner reads: We are on our land!

In a highly provocative move, Sergei Aksenov, head of the puppet government in the Crimea, has banned mass gatherings up till June 6.   The decree was signed on May 16, the first day of remembrance ceremonies and events marking the seventieth anniversary of the Deportation of the entire Crimean Tatar People in May 1944.

Aksenov’s decree claims that the ban is due to events in the South-East of Ukraine and states that “in order to prevent possible provocation by extremists able to get into the Crimea, to avoid disruption to the tourist season in the Crimea, mass events are banned on the territory of the republic of the Crimea until June 6, 2014”.

The Crimean Parliament’s press secretary Yekateryna Polonchuk stated that since the gathering marking Remembrance Day for the Victims of the Deportation planned for May 18 is a mass event, it falls under this decree.

Whether this decree by the Kremlin-backed self-proclaimed head of the Crimea was agreed with Moscow is not clear.  Recent events, including the searches carried out of Mustafa Dzhemiliev’s home in his enforced absence and of other Crimean Tatars, give no grounds for optimism.

Two months after Russia’s annexation of the Crimea, its indigenous people – the Crimean Tatars are already facing serious harassment and threats to dissolve their representative body as ‘extremist’.  The Mejilis is holding an emergency meeting on Friday to decide their reaction.  Huge remembrance gatherings have been held every year in Simferopol on May 18 and it is inconceivable that on this seventieth anniversary it should not take place.  On the other hand, enforcement of the ban if the meeting takes place could result in bloodshed.

A terrible crime was committed seventy years ago, a crime which claimed the lives of up to one hundred thousand Crimean Tatars and forced them as a people to spend almost 50 years in exile. 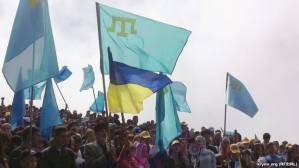 From a previous year’s remembrance gathering