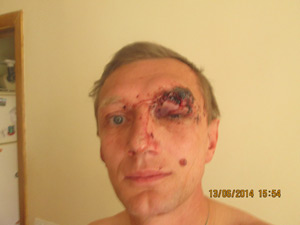 During the last month two attacks have been carried out on our colleague Andriy Didenko.  KHPG Director Yevhen Zakharov believes the attacks to be linked with his work.

Andriy has worked for the Kharkiv Human Rights Group since May 2010, and frequently publishes articles on problems of the penitentiary system such as torture and ill-treatment of detainees and prisoners; the poor conditions; arbitrary rule and abuses by prison administration; corruption within the system, etc.

The first attack took place on June 6 at around 23.30 when Andriy was on his way home. Near the apartment block where he lives with his wife and five children he was set upon by three hefty assailants. One blocked him from behind, the second took his rucksack which had a laptop in it, and the third pulled his mobile telephone, flat keys and KHPG bulletin correspondent ID out of his pockets. Having carefully studied the document, he put this and the keys back.   On that occasion, there was no physical violence.

At the same time on June 12, walking home through the park, Andriy was set upon by two assailants. One hit him on the face with something hard, causing him to lose consciousness. When he came to, he discovered that his other mobile telephone was gone, together with a bank card and 1500 UAH [around 100 EUR], as well as the KHPG ID

Reports have been lodged with the police.

From the report by Yevhen Zakharov