Abducted Crimean Tatar sentenced to five years in Russian-occupied Crimea on insane charges Russia extends terror and abductions from occupied Crimea and Donbas to all of Ukraine Russian soldiers shoot at Kherson protesters demanding that Russia get out of Ukraine Russian Rule of Lawlessness in Occupied Crimea and DonbasCrucial law adopted to help Russia’s Ukrainian political prisoners and hostagesEU sanctions ‘judges’ and others involved in the repression Russia brought to occupied Crimea Russia called a disused aerodrome a state secret to sentence Ukrainian to 12 years Germany’s Nord Stream 2 collaboration comes as Russia holds a record number of Ukrainian political prisoners Ukrainians tortured and imprisoned in Donbas for supporting Ukraine, with Russia blocking their release A brief description of the KHPG strategic litigations in the first half of 2021Kremlin's Ukrainian political prisoner issues impassioned plea to US State Secretary BlinkenJudge who persecuted Maidan activists could get millions in ‘compensation’ following Supreme Court rulingFormer Kremlin hostages put release of all Ukrainian political prisoners on the agenda Crimean Resistance to Russian Aggression and Moscow’s Savage Revenge MPs challenged to fight Russian repression by adopting a Ukrainian political prisonerTotal impunity for Ukrainian politician suspected of involvement in killing of journalist SerhiyenkoUkrainian prosecutor hurries to acquit judge who persecuted Maidan activistsOpinion on the political motives of criminal persecution and violation of human rights in the case of Sergiy PashinskyBelarus threatens to use lethal force against protesters as pensioners march for freedomFrom lawyer for pro-Russia Medvedchuk party to running Maidan cases. Disturbing new top appointment in Ukraine
• Topics / Freedom of expression

Maidan no longer a safe place for journalists? 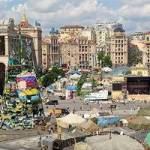 On July 2 a Channel 5 film crew came under attack on Maidan Nezalezhnosti [Independence Square], with a cameraman injured.  The film crew explain that they were taking footage in order to ascertain whether the barricades at present on Horodetsky St are safe.  The aggressive behaviour was explained as being because the people on Maidan did not want their faces shown, and because they didn’t trust the work of the press.  Four young men in camouflage gear demanded that the footage be wiped, and when the cameraman refused, used force against him. Channel 5 also reported that an STB film crew had been threated.

The police report states that at around 13.00 on Tuesday the film crew arrived on Maidan Nezalezhnosti.  While working they were approached by the men in camouflage and told to stop filming and to delete the footage already filmed. When the cameraman refused, he was punched in the stomach by one of the men.  The four then fled, the police say.

Telekritika reports that this is not the first aggression against journalists trying to film on Maidan and near European Square since the EuroMaidan protests ended.

On June 20 members of the ‘self-defence’ unit whose headquarters is in Ukraine House were rough in throwing out an ICTV film crew and removed the footage they had filmed. The Shevchenkivsk District Prosecutor and police have launched an investigation over suspected obstruction of journalists carrying out their work.

On May 31 journalists were driven away from Maidan when they came to cover the work on removing the barricades. One man tried to block the camera of a streamer, while others were verbally aggressive.