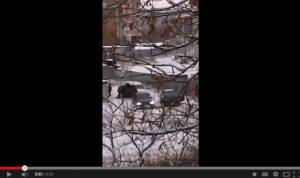 Please join Amnesty International’s urgent action for the release of a married couple abducted by armed men on 30 November in the eastern Ukrainian city of Donetsk. Their whereabouts are unknown, and their lives are in danger.

Anna Sergienko and her husband Victor Gorbenko were driving home from work on 30 November in the city of Donetsk at around 4pm when two black cars and a white minibus started to follow them. On Tereshkovoy Street, only a few minutes from their house, one of the black cars overtook and blocked their way, forcing them to stop.

Armed men in uniform got out, broke the windows of the couple’s car to get in and dragged the couple into the white minibus. Then the gunmen drove off with all four vehicles. These events are shown in video recorded by an eyewitness which Amnesty International has seen.

In a recording send to Amnesty International, eyewitnesses said that there were 10 to 15 armed men wearing dark green uniforms, darker round the pockets and slightly lighter everywhere else. Friends, colleagues and relatives suspect that those behind the abduction were Cossack armed groups fighting against pro-Kyiv forces alongside other Russian-backed separatist armed groups

A relative of one of the couple said that they own a shop in an area that has been controlled by an armed Cossack group since October and that there “had been trouble” before the abduction. Another source reported that the couple had previously received threats from that Cossack group.

A relative told Amnesty International on 19 December that he had very strong evidence that the couple were being held by the local Cossack group, but that it was “not very clear what the group wants and how to negotiate with them”.

A relative filed a complaint with the de facto local authorities, the so-called Donetsk People’s Republic (Donetskaya Narodnaya Respublika – DNR), but it appears that little if anything has been done by them to find out what happened and establish the couple’s whereabouts.

Please write immediately in Ukrainian, Russian, English or your own language:

Calling on the armed groups in de facto control of Donetsk region to establish and disclose the whereabouts of Anna Sergienko and her husband Victor Gorbenko immediately, and ensure their safety;

Calling on them to ensure the immediate release of Anna Sergienko and her husband Victor Gorbenko.

Head of the DNR

Please check with your section office if sending appeals after the above date.

The armed conflict in eastern Ukraine started after pro-Russian separatist armed groups occupied local administration buildings in various towns across Donetsk and Luhansk Regions in April and May 2014, after the Crimean peninsula was annexed by the Russian Federation, and announced the creation of so-called Donetsk People’s Republic (DNR) and Luhansk People’s Republic (LNR).

In response, the Ukrainian authorities embarked on a “counter-terrorist operation”, sending its own forces to try and re-establish control over the territory, which has led to an armed conflict that is still ongoing. Despite a ceasefire declared in September, fighting has continued, albeit less intensively.