Pre-election Game over Deputy ImmunityConstitutional Court: President and judges remain untouchableConstitutional Court restricts deputy immunity but prohibits abusing the PresidentLegislative flurry in Ukraine leaves MPs’ immunity ‘cancelled’ yet still intactUkraine’s High Council of Justice fights back against measures to combat judicial corruptionImmunity has a Human FaceProsecutor seeks to remove deputy immunity from two opposition members of parliamentConstitutional Court: Deputies can be arrested without parliament’s consentPromises are to be keptPACE concerned about merging of business and political interests in UkraineRestrict deputy immunity, but after the electionsYet again the question is raised whether there should be deputy immunityCriminal proceedings against local council deputies in the Chernihiv regionLocal self-government bodies are turning into pardoning machines for dodgy deputies (Notes and reflections on a press conference in the prosecutor’s office)IllusionsMore than 500 appeals to have criminal charges brought against deputies of local councilsDeputy immunity yet again …The first distortions of Deputy "immunity" emerge, with no criminal charges against the Head of the Ternopil regional administrationA Cold shower for “servants of the people”On deputies’ immunity again
• Topics / Politics and human rights 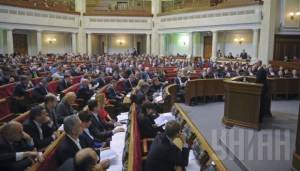 Assurances that this or that political party will abolish deputy immunity have been made since at least 2006.  They normally come during election campaigns and have yet to result in real support for actual legislative measures.

This time, it is leader of the Petro Poroshenko Faction Yury Lutsenko who has promised that the Verkhovna Rada will cancel deputy immunity through staggered amendments to the Constitution in 2015.

According to Dzerkalo Tyzhnya (there does not appear to be a website for the Bloc), Lutsenko acknowledges that the process will be difficult.  He says that those who try to torpedo amendments to the Constitution will inevitably mention the need to add deputy and presidential immunity. He says that this has been a no-fail technique for killing any vote and for that reason he is suggesting that reforms must be voted on in stages.

Lutsenko says that the public are 100% ready for this, but that at least one third of MPs are against removal of immunity.  Any constitutional amendments require a two-thirds majority

He expresses scepticism at the arguments used by, among others, newly-elected MP Ihor Lutsenko that MPs must be protected because without that Maidan [the EuroMaidan protests] would not have been possible.  Yury Lutsenko, like Yulia Tymoshenko, were not MPs back in 2010/2011 when they became victims of politically motivated prosecutions and imprisonment.  However, Lutsenko points out that deputy immunity did not prevent his wife, Iryna Lutsenko (elected to parliament in Oct 2012) and other women MPs being subjected to police violence while trying to save injured protesters on Feb 18 in Maryinsky Park.  He believes that deputy immunity had long become fiction for the enforcement bodies, but it was a source of public anger and destroyed trust in parliament.

In September 2012 the Constitutional Court, by then widely believed to be subservient to Yanukovych, issued a judgement agreeing that the point in the Constitution guaranteeing deputy immunity could be removed.  The move, together with a draft bill tabled by MPs from the then ruling Party of the Regions, came less than two months before the parliamentary elections.  At the time, Ihor Koliushko, Head of the Centre for Political and Legal Reform, called the bill pre-election PR and predicted that it would not get through with both the ruling majority and the opposition playing a game to ensure that immunity was not removed. “The present opposition will repeat what the Party of the Regions did when they were the opposition. They will call for the simultaneous removal of immunity from both the deputies and President”.

He pointed out that the two forms of immunity should not be linked and in fact agreed with the position taken by the Constitutional Court which found the removal of immunity from the President unconstitutional since procedure for impeachment is already envisaged.

It should be acknowledged that although Koliushko and Kostyantin Dikan from the Razumkov Centre proved correct, their prediction did not require great political acumen.  Whether by simply going silent, or through the addition of elements like presidential immunity to ensure a bill’s rejection, all parliamentary factions with any chance of influencing a vote in favour of removing MPs’ immunity have shown no will to do so.

Yury Lutsenko’s words have yet to be tested, but the promises should certainly be remembered.