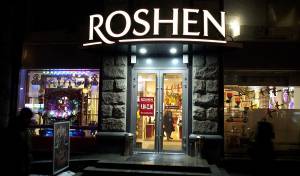 Just over a month after a far-right organization apparently claimed responsibility for the killing in Kyiv of journalist Oles Buzina and politician Oleh Kalashnikov, another group calling itself ‘far-right’ has said that they planted an explosive device in a Kyiv Roshen sweet shop and have threatened more bombs.  The group’s ‘admission’  comes in a rather curious video released on May 29, which Vyacheslav Likhachev, researcher on xenophobia and anti-Semitism in Ukraine, has subjected to close scrutiny.

The explosion occurred just after 23.00 on May 28.  Nobody was hurt, and even damage to the shop itself (a hole in one wall, goods strewn about) was limited.  Oleksandr Tereshchuk, head of the Kyiv Police, said less than an hour after the event that his preliminary assessment was that this was not a terrorist act, but one of hooliganism, with what appeared to be a homemade device using powder.

The video https://youtube.com/watch?v=cr21uc17sbg&feature=youtu.be  appeared the following day, which is just one of the problems, since the person claims responsibility for the explosion “today, May 29”.

Likhachev points to other oddities in the video which says that it is from the group  ‘Kiev Diviϟion’.  During it a man with a baseball bat stands with his back to the camera against the background of the Ukrainian flag and states the following:

“Today, May 29 fighters from our group NS/WP Kiev Division planted a caseless explosive device in the Roshen shop belonging to the Jewish [lit. Judaic] dictator Poroshenko.”  He goes on to claim that since his coming to power, all areas of industry have plummeted, and the population is dying out, while Poroshenko’s business interests have increased 18-fold.  “We call on all far-right radical activists to inflict mass strikes on the business of the legitimately elected occupier, destroying our country.  We await new explosions, comrades”.

The young man is not only speaking Russian, but is also doing so without any trace of a Ukrainian accent.  Likhachev suggests that the man is reeling off a text he had memorized or occasionally glancing at a piece of paper.  Either would probably explain why he calls Poroshenko “legitimately elected” whereas, from the context, “illegitimately” would have been expected, as well as another syntactic irregularity.

Likhachev, however, points to other unusual elements in this very brief video.  One is that far-right radical activists very seldom refer to themselves or their ‘comrades’ in such terms.  There is also the use of ‘caseless’ which sounds as if it has come from a police protocol.  This is in marked contrast to the police chief’s description of a clearly amateur explosive device.

Likhachev deciphers the title of the group, with NS clearly ‘national-socialist’, WP used as the letters for ‘white supremacy’ and the name itself uses the sieg rune «ϟ», .

The web page of the group has Nazi and neo-Nazi placards, as well as material glorifying the Russian racist murderer Dmitry Borovikov, implicated in murderous attacks on people of non-Slavonic appearance in Russia.  Borovikov was killed when the police came to his home to arrest him in 2006.

The page also mentions actions together with the far-right gangs Nazhdak and Modny Prigovor.  The latter has been reported here, as has the notorious “Okkupai-pedofilyai” gang it is a copy of, with this organized by Russian neo-Nazi former skinhead Maxim Martsinkevich [‘Tesak’, or ‘Hatchet’] (more details here).

There have been a couple of other attacks this year on Roshen shops (one, admittedly, with cakes being hurled at it!), with the radical group Revanche believed to be responsible.  Revanche, a far-right group, gained a degree of notoriety during disturbances outside parliament on Oct 14, 2014.  The attacks on Roshen were presented (by Vesti, a newspaper with highly suspect funding) as being because Ukrainian soldiers are dying while Poroshenko is making money through his chocolate factory in Russia (which has now, in fact, been taken away).  Those reports did not mention any anti-Semitic labelling of Poroshenko.   It seems that Revanche may also have claimed responsibility for the attack on May 28.

If the ‘Kyiv Division’s’ claim that they were behind it is true, then their threats of other attacks, presumably with a similarly anti-Semitic flavour should be taken seriously.  On the other hand, those who carried out the attack surely know when the device was detonated, unlike the young man in this video with his ostentatious Ukrainian flag, Russian speech without an accent, and reference to Poroshenko as an ‘occupier’.