Mass burial site at Izium, imprisoned teenagers and other Russian war crimes in Kharkiv oblast Vovchansk Engineering Works: Dungeons on the Chechen ModelFirst tortured victims exhumed after Ukraine drives Russian invaders out of Kharkiv oblast village ‘In a panic, people abandoned their bed-ridden relatives.’ А resident of Mariupol story about how people were coerced to leave for RussiaRussia sends forcibly mobilized Ukrainians from occupied Donbas to die as ‘live bait’ at the frontlineRussian horrific castration of Ukrainian POW was about terror and preventing own soldiers from surrendering “Do You Still Want This War?” Anti-War Activities in Russia, 3-9 July 2022Crimean Tatar journalist detained on charges of ‘discrediting Russian army’ and jailed for "showing resistance"Russian proxy ‘Donetsk republic’ threatens foreign defenders of Ukraine will be executed, with families not told whenCovert mobilization and Ukrainian conscripts from occupied Crimea sent to die in Russia’s war against Ukraine Missing and Detained Individuals in the Kharkiv Region: An analytical review (24 February to 23 June 2022)What ‘denazification? Russian neo-Nazis used to fight Moscow’s war to destroy Ukraine Disappearances in the Zaporizhzhia Region (24 February to 18 June 2022)Russian legislative changes would mean school leavers can officially be sent to fight in Ukraine Desperate plea from the wives of Donbas men seized and sent to fight Russia’s war against Ukraine"Death sentences’ of British & Moroccan POWs in occupied Donbas show clearly why Russia must be driven out of all of Ukraine Mariupol in danger of cholera outbreak, but Russian invaders concentrate on removing signs in Ukrainian ‘I was afraid that I won’t be killed at once but will be maimed’ – a resident of RubizhneUkrainian "refugees" in Russia forced to give "testimony" blaming Ukraine for Russian war crimes International experts issue stark warning of Russian genocide against Ukraine
• Topics / The right to life 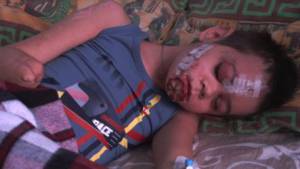 KYIV/MARIUPOL -- On the grass outside an old Soviet-era military hospital, tucked on a side street in the capital, Kyiv, Ukrainian soldiers in camo-patterned jackets and fur hats puff on cigarettes and share laughs.

Their banter reflects the current lull in the fight against Russian-backed separatists hundreds of kilometers to the east, where a shaky cease-fire is holding despite occasional flare-ups and no sign of a lasting solution.

But just a few steps away, in a medical building surrounded by the nearly leafless trees of autumn, lies a tragic example of one of the legacies of war that could haunt Ukraine well into its future.

Eleven-year-old Mykola Nyzhnyakovskyy -- Kolya to his mom and friends -- is straining to scratch the itching wounds from shrapnel embedded in what’s left of his legs. He is using his left hand, the one that remains.

His mother, 38-year-old Alla Nyzhnyakovska, caresses his head and tries to put a brave face on his situation since the day two months ago when an unexploded munition shattered three of Kolya’s limbs and killed his 4-year-old brother, Danylo, instantly.

"I’m showing him pictures of soldiers who’ve lost their limbs but manage to live normal lives now, " she says as she flashes a photo of a man with two prosthetic legs holding a baby. "I want him to know that he still has a life ahead of him, that there is hope to start a family and live a normal life."

It is just one facet of the 20-month-old conflict paralyzing the country since a separatism-fueled war erupted in eastern Ukraine. But unlike the shooting, it threatens to keep killing well beyond the end of the fighting.

Two months ago, Kolya was your average, healthy, 11-year-old boy. While he didn’t care much for school, he did love the challenge of 3-D puzzles. But perhaps the only thing he enjoyed more than patiently assembling puzzles, his mother says, was time spent venturing outside to play with Danylo.

But on August 25, both boys joined three other boys sweeping through their village of Volodarske, about 10 kilometers northwest of the Azov coastal city of Mariupol, investigating the world around them.

Inspecting a drainage pipe, one of the boys noticed something. It was green and looked enough like a toy that he dragged it out. Curiosity overcame the boys, and they surrounded each other to get a better look. Before long, in their excitement, one boy pushed another, who fell into the boy holding the object, sending him tripping over a rock. As the boy tumbled, he released the object, which authorities would later determine to be an unexploded rocket-propelled grenade. It dropped to the ground, detonated, and sent thousands of razor-sharp slices of shrapnel hurtling in every direction.

The UN children’s agency UNICEF reported earlier this year that at least 42 children had been killed and 109 more injured by land mines and unexploded ordnance in eastern Ukraine in the first year of the war -- figures that have climbed by double digits in the subsequent six months, judging by reports of individual incidents.

The battle between Russian-backed gunmen and pro-Kyiv forces for control of towns and territory was especially fluid early on. One of the results was the laying of land mines despite a prohibition under the 1997 international Mine Ban Treaty to which Ukraine (but not Russia) is a signatory. In some cases, with territory passing back and forth, land mines were unwittingly planted in fields already scattered with mines.

It is unclear who planted the land mines. The Ukrainian government insisted last year that it had never deployed such weapons, and Kyiv placed the blame specifically on regular Russian troops that it claimed were directly involved in the conflict in support of separatist leaders in places like Donetsk and Luhansk.

For its part, Human Rights Watch has said "it is not possible at this time to concretely determine the responsibility of any party."

Edward Crowther, of the Danish Demining Group, a unit active in Ukraine of the Danish Refugee Council, a nonprofit that works worldwide to help people affected by conflict, says open-source compilation suggests 569 Ukrainian troops had been killed in action by land mines by September. The exact number of civilian deaths was unclear.

"That in itself is extremely sizable, " Crowther says.

"At present one of the key difficulties is there’s no real publicly or openly available information about the number of casualties or the scale of the mine problem, " Crowther says. "Everyone is pretty much relying on pieces of information from open-source data, and of course stories from the field, but no one has any real hard data or facts at the moment."

The Ukrainian military says it has been attempting to clear what it can.

On one recent mission, just outside the eastern Ukrainian city of Mariupol, sappers inspected a vast field to begin their clearance work. They were called in by Metinvest, a local corporation that owns the electrical towers that crisscross the expanse. It is close enough to the city that smokestacks from a major factory are in full view.

The sappers strap on basic armor and head out with simple sticks, to tap their way around the field.

"We can’t trust our metal detector here because of the interference from the electrical towers, so all we can use are these sticks, " says 45-year-old team leader Oleksandr Pozamtal.

After nearly stumbling onto an 82-millimeter mortar shell, one of the servicemen, 22-year-old Oleksiy, suggests that "this is the second stage of the war now."

"It’s winding down, but the most dangerous things are these mines -- and snipers, " Oleksiy says.

He says his wife back home in western Ukraine worries about the work he does, but he claims to have become numb to the risks.

"It’s our job, and we understand what we face in these fields, " Oleksiy says. "I was terrified, of course, when I first started, but you just become used to it like any other job."

The sappers don’t always unearth everything. In August, 65-year-old farmer Heorhiy Voyevoda called the military in to inspect his plot of land outside Mariupol, where he’d been warned about mines. After they’d done their work and declared it safe, Voyevoda was confident enough to begin harvesting.

But as he drove down to the perimeter of his property, a powerful explosion ripped through his tractor.

"I felt nothing and remember nothing, " he says, but adds that his tractor’s wheels were blown clear in opposite directions.

The blast left Voyevoda in intensive care for two weeks, and in the hospital for another two months, recovering from third-degree burns, broken bones, shrapnel wounds, and a concussion.

Outside groups like the DDG have yet to begin demining work in Ukraine, partly because of bureaucratic hurdles to importing the sophisticated equipment needed to demine.

The so-called Normandy Quartet of Ukraine, Russia, France, and Germany, formed to try to ease the conflict, has expressed confidence that it can hammer out an agreement on demining in eastern Ukraine by the end of this month.

One OSCE observer says he is optimistic that intensive demining will begin before the first snowfall, and suggests that as a symbol of a return to normality, work might be heavily focused on Shyrokyne, a village east of Mariupol where a major standoff played out in the first half of 2015 but which is now the focus of a possible demilitarization plan.

It can’t come soon enough, says Crowther, because "unfortunately it’s likely that as the conflict slips into a frozen phase" -- meaning the kind of protracted dispute that many believe Moscow is seeking in eastern Ukraine -- "and people attempt to return to their homes to assess the damage and resume their lives, there will be a spike in casualties."

Days after his accident in late August, Kolya awoke in a military hospital in Zaporizhyia, nearly 200 kilometers from home. He had been airlifted there after the blast, with three limbs gone and serious injuries to his head and torso. Both legs had to be amputated below the knee and his right arm ends in a stump below the elbow.

Kolya’s devastated mother was nowhere to be seen. In fact, it would be weeks before she came to see him. She had gone into such shock after receiving the news that she didn’t make the trip to the Zaporizhyia hospital. Instead, she says, she spent weeks at home, drinking and psychologically detaching herself from Kolya in preparation for what she assumed was the inevitable announcement that her only remaining son would also succumb to his injuries.

But Kolya survived -- the first step on a long road ahead.

Now, in his hospital room in Kyiv, his mother sits patiently at his bedside and shows in her palm bits of rocket-propelled grenade retrieved from inside his devastated body. She shares a photo of him from before the accident, astride a bike, dressed in motocross leathers.

He is barely able to speak through bandages from the latest operation to repair damage to his face and head.

Alla Nyzhnyakovska holds out hope for the best, but there is something that she has not had the courage to tell Kolya.

When he asks, as he does frequently, Kolya’s mother tells him that Danylo is being treated at another hospital.

The pain of learning that his beloved little brother and playmate died instantly on that summer day, stolen by a blast from the litter of war, will have to wait.