Putin signs decree to let Ukrainian traitors and fugitives from justice hold public office in RussiaRussia did not invade Crimea in new school textbooks edited by Putin adviser Ukrainians resoundingly dismiss Putin’s claims of ’‘historical unity’ Every second Russian supports a monument to Soviet dictator Stalin Russian libraries purge books telling ‘the wrong history’ about the USSR in WWII Ukraine passes crucial law that Putin compared to a weapon of mass destruction Russians name Stalin as the most ‘outstanding’ figure of all times Hysteria from Russia confirms it has reason to fear Ukraine’s bill on indigenous peoples Abducted journalist’s life is in danger in Belarus. Not only his while Lukashenko and Putin get away with terrorismRussian militant who brought war to Ukraine may become MP for Putin’s United Russia partyRussia blocks military archives in further effort to distort the truth about World War IICrimean Tatar sentenced to 6 years for involvement in legal Ukrainian organization A brief description of the KHPG strategic litigations in July–December 2020Ukrainians forced to take Russian citizenship, or lose their homes in occupied Crimea Putin threatens to increase Russia’s ‘support’ for occupied DonbasCrimean Solidarity journalist on ‘trial’ for not denouncing a social media contact to Russia’s FSBRussia ‘sells’ plundered Crimean Massandra winery to Putin oligarch cronyPutin signs ‘law’ imposing 10-year sentence for ending Russia’s occupation of CrimeaModel concentration camp deployed in Russia for Putin regime’s rewriting of historyRussian ‘pride’ over invasion and annexation of Crimea is fading fast
• Topics / News from the CIS countries

Parsing Putin: Russia Sends Signals To The West In Statement On Jet Attack 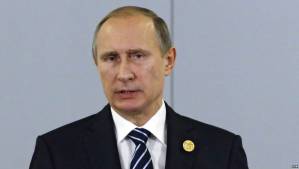 A few hours after French President Francois Hollande called for Moscow and the West to fight Islamic State (IS) militants together in the wake of deadly attacks in Paris, Russia abruptly announced it was now certain a terrorist bomb blew a passenger jet to pieces over Egypt on October 31.

The timing of the announcement was clearly no coincidence. When the Federal Security Service chief reported on national television that the Sinai crash that killed 224 people was a terrorist act, President Vladimir Putin was ready with a solemn moment of silence, a stern vow to punish the culprits, and an order to step up Moscow’s military campaign in Syria.

Putin’s tough but tightly scripted talk was meant to warn militants worldwide and reassure Russians that they are being protected, but his statement also contained several messages to the West -- some coded, some clear as a bell. The main message: Fight terror together, on our terms, or step aside.

Here are some of Putin’s key remarks in the statement, recorded late on November 16 and televised the next morning, and what they meant in terms of signals aimed at the United States and Europe:

Putin: "It is not the first time that Russia has faced barbaric terrorist crimes, most often without any visible reason, external or internal."

What he means: Russia is no less a target and victim of Islamist militancy than Western countries, and nothing in the state’s conduct at home or abroad can justify attacks. The West must drop what Putin has frequently called double standards and join Moscow in an unequivocal battle against terrorism.

Putin: "We will seek them out everywhere, no matter where they are hiding. Will find them any place on the planet and punish them."

What he means: The West should be aware that Russia reserves the right to conduct antiterrorist operations anywhere in the world, and may not limit such actions to Syria.

Putin: "[Russian air strikes in Syria] must be strengthened in such a way that the criminals understand that retribution is inescapable. I ask the Defense Ministry and the General Staff to submit corresponding proposals."

What he means: Russia will step up its military operations in Syria, but will remain vague for now on the details. The degree to which Russian strikes target IS militants may depend on the willingness of Western states to accept Moscow as an ally in the battle against terrorism.

Putin: "I ask the Foreign Ministry...to appeal to all of our partners. We are counting on all of our friends during this work, including in searching for and punishing the criminals."

What he means: After two years of escalating tension over Russia’s aggression against in Ukraine, the Kremlin is ready to call Western countries "friends" again -- but only if they join Moscow, on its terms, in the fight against Islamist militants.

Putin: "We will operate in accordance with Article 51 of the United Nations Charter, which provides for the right of states to self-defense."

What he means: Don’t question Russia’s actions, at home or abroad, that are stated to be aimed to decrease the threat of terrorism -- they are grounded in international law.

Putin: "All those who try to lend support to the criminals should know that the consequences of attempts to harbor them will lie wholly upon their shoulders."

What he means: Moscow may regard states that do not accept it as an ally in the fight against terrorism as conniving with militants, something Putin has in the past accused the United States of doing with regard to insurgents in Russia’s North Caucasus.

What Putin didn’t say also sent a message. By declining to refer to the extremist IS group by name, the pragmatic Russian president left the door wide open for Moscow to continue targeting other enemies of its ally, Syrian President Bashar al-Assad -- some of which are backed by the West.

And by making no mention of Assad, Putin indirectly repeated one of Russia’s key positions in the global diplomatic tussle over the Syrian civil war: that Assad’s exit cannot be a precondition for any solution -- and that the West’s desire to see him out of power is hindering efforts to defeat IS.

Russian Foreign Minister Sergei Lavrov repeated that argument in overt terms on November 18, saying that it is "simply unacceptable to put forward any preconditions for joining forces in the fight against terror."