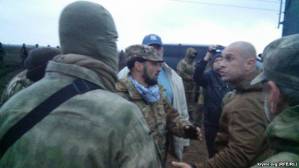 Ukraine has temporarily suspended cargo traffic to the Crimean Peninsula as the territory illegally annexed by Russia continues to deal with a power blackout after electricity pylons were destroyed by explosions over the weekend.

The move came after Crimean Tatar activists blocked authorities' efforts to visit the sites of the November 21 explosions in Ukraine's Kherson region, from where the electricity was transmitted to Crimea. The blackout caused by unknown attackers has left about two-thirds of the Crimean peninsula's residents without electricity and the territory in a state of emergency.

Ukrainian Prime Minister Arseniy Yatsenyuk on November 23 ordered the "temporary" halt of the delivery of all goods to the peninsula, which was illegally annexed by Russia in 2014 amid an escalating political crisis in Ukraine.

Yatsenyuk also ordered his government to draft a concrete list of goods and services that would be prevented from entering the peninsula from mainland Ukraine.

Officials from Crimea's Russia-backed government said on November 23 that the decision would not have an impact on the peninsula.

Generators are being used to supply power to major cities as well as Russian Navy installations at Sevastopol. But Russian Deputy Prime Minister Dmitry Kozak said on November 23 that the peninsula is able to fulfill only about 30 percent of its electricity needs. At least 1.5 million residents of Crimea have been without power.

Ukrainian Interior Minister Arsen Avakov, meanwhile, has said that just one of the four damaged transmission towers is currently reparable. He told an emergency cabinet meeting on November 23 that the possible presence of mines and the threat of "subversive attacks" made repair work impossible.

Ukrainian Energy Minister Volodymyr Demchyshyn said at the session that workers could return electricity to Crimea within 72 hours of gaining access to the site.

Groups of Crimean Tatar activists have been preventing engineers from reaching the sites.

The veteran leader of the Crimean Tatars and Ukrainian lawmaker Mustafa Dzhemilev said on November 22 that talks on resuming the electricity supply from Ukraine to Crimea would be possible only after "all Ukrainian citizens jailed in Russia in politically motivated cases" are freed and a commission to investigate killings and disappearances of the Crimean Tatars was created.

Although Crimea was illegally annexed by Moscow in March 2014 in a move that has led to international sanctions against Russia, Ukrainian authorities have continued to supply power to the peninsula.

Last week, Russia announced that it would ban all food imports from Ukraine beginning January 1. The countries banned landings by each other's airlines in October.

Relations between Moscow and Kyiv have been at historic lows since the annexation of Crimea, which was followed by pro-Russian separatists seizing control of some parts of Ukraine's eastern regions of Donetsk and Luhansk in military operations that left at least 7, 900 people dead.

With reporting by UNIAN, AP and Bloomberg