Ukraine orders deportation of ethnic Ukrainian facing persecution in Russia for opposing Putin and the war‘My brother and weakened mother were left in the middle of the street’ — stories from Izium‘In Sloviansk, we watched out of the window as people held up the train tracks with crowbars so we could pass through’ ‘There was a human being, and the body was torn apart in an instant’ — a Mariupol graduate who went through hell‘Stand up for your convictions, even if you stand alone!’ Anti-war activities in Russia, 3-9 October"Did the Chechens cut your heads? No? We will do it..."From a Zwastika to "No to the War". Anti-war activities in Russia, 9-18 SeptemberLook at this instead. Anti-war activities in Russia, 2-11 September 2022Conflicting values and conflicting narratives: the case of Russia’s war on UkraineRussia "takes revenge’ for humiliating attack on Crimea military base by new mass arrests of Crimean Tatars “He lay on the sidewalk, naming towns and cities in Ukraine”. A digest of anti-war activities in Russia, 23-29 JulyRussian horrific castration of Ukrainian POW was about terror and preventing own soldiers from surrendering “Let’s Fight the Propaganda Together” Anti-war Activities in Russia, 9-16 July 2022Necessary conditionsFormer HR Ombudsman Lyudmyla Denisova on her dismissal, 4 years of work, Ukrainians in occupied areasWell-known Ukrainian journalist and rights defender taken prisoner by Russian invaders Russia copy-pastes first attack on Crimean Tatar activists after 4 years for new 13-year sentences Chief Russian propagandist: “All our hope is pinned on famine” Russia kills refugee in occupied Crimea, then ‘puts him on trial’“We can"t clean ourselves from the blood” – digest of Russian protests
• Topics / On refugees 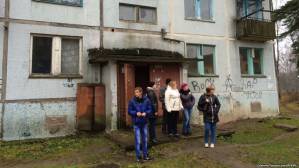 PSKOV, Russia -- Svitlana Moroz, her two sons, and her elderly mother have lived in the spartan Sport hotel in Pskov, in western Russia, for nearly a year and a half now.

But they and hundreds more like them who fled the fighting at home in eastern Ukraine could soon be out on the streets after Moscow in November adopted tougher new rules for the refugees.

In the past, those fleeing the conflict in Ukraine’s Donbas region could live in so-called temporary accommodation points (TAP) -- mostly rundown hotels like the Sport -- for as long as it took them to get back on their feet. Now, as of November 1, those stays in TAPs will be limited to 60 days, as will daily allowances.

Russian President Vladimir Putin had made a point of warmly welcoming Ukrainian refugees in large part to demonstrate Kremlin concern at the plight of Russian speakers, who Moscow claimed were suffering persecution under the new authorities in Ukraine.

But Moscow is in a less generous mood these days, as the Russian economy sags under the weight of depressed global oil prices and international sanctions over Russian actions in Ukraine, including the forced annexation of Crimea and alleged support for armed separatists.

And the refugees are becoming a drag on Russia’s federal budget. According to official data, 16, 418 Ukrainian citizens who fled the conflict are still living in temporary housing in Russia. Quick math suggests that Moscow is spending nearly 400 million rubles ($5.7 million) a month to house them, not a paltry sum. Every refugee is also entitled to 800 rubles ($11.34) a day as a subsistence allowance.

The Sport hotel, which arguably saw its best days back in the 1980s, has accommodated 326 eastern Ukrainians since the conflict erupted in early 2014. Today, most have moved on, with many finding jobs elsewhere in Russia and some having even returned to the Donbas. Twenty-three people remain, however, including Moroz and her family.

She tells RFE/RL’s Russian Service that she and her family fled their hometown of Makiivka in the Donetsk region in June 2014 after fighting between pro-Russian separatists and Ukrainian forces intensified. Moroz says they were lucky, getting out just before their apartment block was hit by artillery fire. She saw some of the aftermath in photos posted on social media, she says.

Moroz says that aside from her apartment, she left behind two sisters -- though her son interrupts to add a couch to the list. She laughs, acknowledging that furniture is in short supply in their room.

But Moroz says her concerns have mounted since being informed in November by local authorities that her refugee status was not renewed and she and her family would have to vacate the hotel.

Moroz came to Russia with the hope of becoming a Russian citizen.

Her mother, Irina Germanovna, was born in Russia, in the city of Kostroma, some 350 kilometers northeast of Moscow. She moved to Ukraine when she was 19, following her husband, who served in the Soviet military and was sent there to serve. Germanovna was looking to "reclaim" her lost Russian citizenship, which would entitle her to disability benefits and a pension.

"We thought everything would go quickly after they told us, &#146Everything will be sped up, and you will become citizens of Russia in six months, ’" Moroz recounts. "As a result, I went and submitted all the required documents but was told I needed to be locally registered for three years. How are we supposed to get that?" she asks incredulously.

Moroz’s older son, Danil, has neither a Russian nor a Ukrainian passport, since he arrived in Pskov just as he was turning 16, normally the age when passports are issued. She is worried he will be unable to continue his studies after the ninth grade or find a job. However, she says that local officials have promised to issue him some type of document.

"If only they would issue the documents, we would already be..." says Germanovna, her voice fading.

Documents are the biggest bane of the refugees, the crucial key to opening opportunities to employment, housing, and benefits. Many refugees complain that if only they didn’t need them, they could find housing and work much more easily.

Yevhenia Bogatyr and her husband and three children considered heading back to their home in the Popasna district in the Luhansk region of eastern Ukraine during a lull in the fighting but abandoned those plans for good when hostilities erupted again. They were told at the end of November, however, that they would have to vacate the Sport hotel. Their home district was not listed by the Russian government as "dangerous territory, " and therefore they were no longer entitled to temporary refugee status.

"I cried, " says Yevhenia. But local authorities came to her family’s rescue, finding a "sponsor" who agreed to pay for their housing until the end of the school year.

If the conflict in eastern Ukraine doesn’t end by then, she says they and other families facing eviction in the Sport hotel will have only one choice -- head to Smuravyevo, site of a former Russian air base in Pskov Oblast.

There are 120 empty apartments in Smuravyevo, and local authorities are eager to see them rented out and the refugees in the Sport are being urged to go there.

After the military personnel left the town years ago, about 500 people remained. The former Soviet-era "Culture House" is abandoned, many of its windows smashed. Abandoned barracks are scattered among the gloomy apartment blocks. Grass and weeds sprout through the sidewalks, a sign of years of neglect. Living here requires courage or desperation.

Yulia and her husband and two children have been living in a three-room apartment in Smuravyevo for about a year. Speaking to RFE/RL, Yulia says they are more or less content. They had to do some repair work to the bathroom, but all the apartments here are in need of work. The local school is good. Neighbors are friendly. And her husband found work at the lumber mill some 20 kilometers away.

After the frequent shelling back home, for all its faults, Smuravyevo can almost look like paradise.

But for Svitlana Moroz, her mother, and other refugees from eastern Ukraine, it’s a far cry from the hopes they once placed in Russia and, in particular, in Putin.

Moroz says she and her mother voted in May 2014 in the referendum in eastern Ukraine, not so much to voice their support for the self-declared, separatist-run "Donetsk People’s Republic, " but for something else.

"We took part in the referendum and voted with the hope that Putin would take us in, as he did with Crimea. We basically were voting for Putin, " Moroz says, hoping that, like Crimea, Russia would swallow up the Donbas as well.

Asked if she now thinks Putin has abandoned them, Moroz says bitterly but slightly unconvincingly: "No."