62-year-old Chernihiv village head abducted by FSB to Russia and tortured Russian invaders mine children’s playgrounds leaving trail of horrific war crimes Putin signs decree to let Ukrainian traitors and fugitives from justice hold public office in RussiaRemember 16-year-old Stepan Chubenko and how Russia protected his Donbas militant torturers and killers Legal Opinion on the political motives of the criminal prosecution and violations of human rights in criminal proceedings of Konstantin Zhevago23-year sentence for social media posts about religious persecution and for faith in Russia “Now and then the flame dies down, but solidarity is a stream of sparks”MPs challenged to fight Russian repression by adopting a Ukrainian political prisonerRussia sentences Ukrainian ex-footballer to 12 years on secret ‘spying’ chargesEmpty promises from Ukraine’s leaders as release of Kremlin’s hostages ‘buried’The price of PACE capitulation to Russia: Soaring number of Crimean Tatar and other Ukrainian political prisonersRussia has no problem with the torture and killing of a 16-year-old Ukrainian schoolboyRussia secretly imprisons Ukrainian footballer for 9 months, then charges him with ‘spying’ for UkraineDonetsk militants seize passionately pro-Ukrainian young man with a serious heart conditionRussia protects and gives lucrative employment to torturer and killer of Ukrainian schoolboy“In my native Donetsk somebody is being savagely tortured right now”Russian proxy Donbas ‘republic’ jails 23-year-old Ukrainian student for social media ‘likes’ and pro Ukraine viewsSavagely tortured to death for the Ukrainian flag in Russian-occupied Crimea and Donbas16 years old and tortured to death for supporting Ukraine. Five years on Russia protects his killerRussian proxy ‘Luhansk republic’ seizes another woman hostage
• Topics / News from the CIS countries 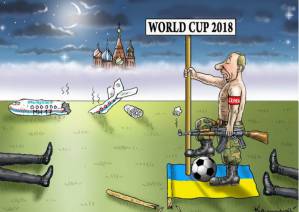 30 Russian pro-democracy activists and journalists have signed an open letter calling on FIFA not to hold the 2018 Football World Cup in Russia, because of Putin’s aggression against Ukraine and his administration’s repressive policies towards its own population.

If the 2018 World Cup is nevertheless held in Russia, the signatories call on national football teams to boycott the event.

SAY NO TO 2018 FOOTBALL WORLD CUP IN RUSSIA

We call on FIFA to take the 2018 World Cup away from Russia and give it to another, more appropriate host country; or if this is not done, we call on participating teams to boycott the 2018 Football World Cup in Russia just as countries, teams and individual sportsmen and women boycotted the 1980 Summer Olympics in the Soviet Union.

The reason for our campaign is, above all,  Russia’s annexation of Crimea and invasion of eastern Ukraine. This illegal action has resulted in the deaths of over 9, 000 people and turned 1.4 million into Internally Displaced Persons. President Vladimir Putin’s actions during this violation of international law and international agreements also included supplying the Buk missile system used to shoot down flight MH17 on July 17, 2014, killing all 283 passengers and 15 crew on board.

In addition, Putin has imprisoned a large number of innocent people in connection with his war in Ukraine, and continues to do so. Among the most prominent are Ukrainian pilot NADIA SAVCHENKO (kidnapped and put on trial in Russia), Ukrainian film director OLEG SENTSOV (sentenced to 20 years in prison) and Russian activist ILDAR DADIN (sentenced to three years in prison).

In Crimea and the Russian-occupied areas of eastern Ukraine human rights abuses are rampant.

Crimean Tatar leader MUSTAFA DZHEMILEV, - the nation’s Gandhi or Nelson Mandela - was deported by Stalin as a baby and later imprisoned in the Soviet Gulag. Since 2014 he has been banned by Russia from returning to his homeland.

Under these circumstances we believe it is wholly inappropriate for football players, fans and sponsors to legitimise Putin’s actions in Ukraine by participating in a World Cup tournament held in Russia. Until Crimea is returned to Ukraineand Russia starts adhering to its own constitution and international law strictly and unconditionally,  Russia should be excluded from hosting this and any other such international events.

·         ALEXANDER BYVSHEV – teacher and poet from Russia’s Oryol Region; convicted of “extremism” for his poems in support of Ukraine, banned from teaching and sentenced to six months’ community service

·         SVETLANA DAVYDOVA – mother of seven children from the Smolensk Region in Russia;  charged with treason and imprisoned for warning the Ukrainian embassy in Moscow that Russian troops had [were being] deployed to Ukraine

·         MIKHAIL KRIGER – activist in Moscow; spent 15 days in prison in 2015 for protesting in support of opposition leaders Alexei and Oleg Navalny

·         YEKATERINA MAKAREVICH – journalist from Moscow who has moved to Ukraine

·         YEKATERINA MALDON – activist detained in Moscow many times in 2014 for her protests in support of Ukraine; she has moved to Germany

·         PAVEL SHEKHTMAN – activist who escaped from house arrest in Moscow after being prosecuted for a Facebook post; presently claiming asylum in Ukraine

·         ALEXEY SHMATKO – businessman from the Penza Region who was arrested by the FSB; is currently claiming asylum in the UK

·         EMIL TEREKHIN – activist from Moscow who has moved to Ukraine

·         ANDREY TESLENKO – activist from the Altai Region (Siberia); moved to the USA after being prosecuted for criticising the authorities

·         ANASTASIA ZOTOVA – journalist and fiancee of political prisoner Ildar Dadin, who was sentenced to three years in prison for protesting peacefully in support of Ukraine

“I would be sorry to take this fantastic event away from my fellow countrymen, ” says Nizhny Novgorod-based history teacher and activist ILJA MJASKOVSKIJ: “but I hate to imagine it being held in such a terrible self-aggrandizing and brash way.”