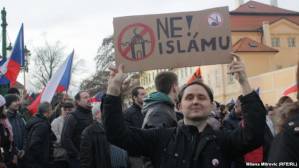 Russian propaganda is exploiting the migrant crisis in hopes of sowing distrust in European institutions and its elites, the study found.

Sowing distrust and disbelief in Europe and its institutions is the main aim of Russian propaganda in the Czech Republic, according to a new study.

And unlike the attention-grabbing tactics used during the Soviet era, according to research conducted by two academics at Masaryk University in the eastern Czech city of Brno, Moscow is playing a sophisticated long game in the Central European country.

"When you mention propaganda, most people imagine posters, drawings, and videos aimed at eliciting some kind of emotion and altering views, " explains Milos Gregor, one of the study’s authors. "It turns out those kinds of manipulative techniques are rarely used. The techniques are much more sophisticated and subtler, employed over time to change views and opinions."

The approach is also not isolated to the Czech Republic. Brussels is so concerned with Kremlin efforts to mould minds across the EU that it set up its first operation to counter Russian propaganda in March 2015. EU leaders, especially in the Baltic states, have been alarmed at how Moscow has used its media to gain support for its views and policies.

In the Czech media sphere, ad hominem attacks, finger-pointing, and outright fabrications are all elements in the propaganda practiced by pro-Kremlin Czech news websites, according to Gregor. He stresses that Kremlin propaganda efforts are not as focused on challenging individual facts, but rather "framing the debate" in a way that is sympathetic with Moscow’s goals.

Migrants Bad, Ukraine Not So Much

The study looked at four news websites, which the authors of the study found disseminate the most pro-Kremlin news. In particular, the study focused on how these sites covered the migrant crisis in Europe, as well as the conflicts in Syria and Ukraine.

Russian propaganda is exploiting the migrant crisis in hopes of sowing distrust in European institutions and its elites, the study found. On the other hand, in the conflicts in Ukraine and Syria, where Russian actions are said to be fueling tensions, if not worse in eastern Ukraine, Russian propaganda seeks to minimize such perceptions.

"Articles on the migrant crisis were very emotional, using lots of emotional techniques, spreading rumours, appealing to fear, etc. In contrast, with the conflict in Ukraine, or Syria, in these articles the events were downplayed perhaps to leave the reader with a sense it was not such a big problem or not such a horrible event as first may appear, " Gregor explains.

Gregor says information and articles critical of EU or U.S. policy are fine as long as they are grounded in fact. That, Gregor says, is not the case with Russian propaganda.

"We focused on whether criticism of the European Union was, let’s say, fair and factual or whether manipulative techniques were employed, either with labelling, demonization of an ’enemy, ’ or something along those lines, " he adds.

Speaking at a press conference earlier this week in Prague to unveil the study, its other author, Petra Vejvodova, also stressed the sophistication of Kremlin efforts, saying they rarely if ever blatantly back Moscow policy or its leaders.

Vejvodova noted that Russian President Vladimir Putin was cited in only 30 percent of the material examined by the study. That put him third behind Czech President Milos Zeman and Finance Minister Andrej Babis.

The four websites examined in the study are the Czech version of Sputnik, a Kremlin-controlled news services operating in several countries, two openly pro-Russian sites, AC24 and Svet kolem nas (World Around Us), and Parlamentni listy (Parliament Papers).

The inclusion of Parlamentni listy has stirred some controversy.

Daniel Kaiser, a commentator at Echo24.cz, noted it had by far the largest readership of any of the five sites in the study. "Even the casual reader will notice that this portal is open to all, the more outspoken and emotional, the better, " Kaiser wrote.

Naturally, the head of the publishing company behind Parlamentni listy didn’t agree with its characterization as pro-Kremlin. "Why were we included among the pro-Kremlin websites? Because we are a big and influential organization, which obviously bothers someone, " Jan Holoubek told iDNES.cz. "More important for us is our 300, 000 readers. Let each make up his mind himself."

Gregor says content on the site was found to have employed the same "manipulative" techniques as the openly pro-Kremlin sites, even more so in some coverage of foreign news.

Activists in the Czech Republic say the best way to counter Kremlin propaganda is to raise awareness, especially among youth.

The NGO Clovek v Tisni (Person In Need) is offering schools an audiovisual study program on propaganda, which has reportedly met with great interest from educational administrators.